It's always hard to take farce at anything other than face value. Still, I am a firm believer that this rambunctious cousin of the straightforward comedy can be far more than a means of exercising one's belly muscles: it can shed light on the endless foibles of human nature and enlighten even as it entertains. 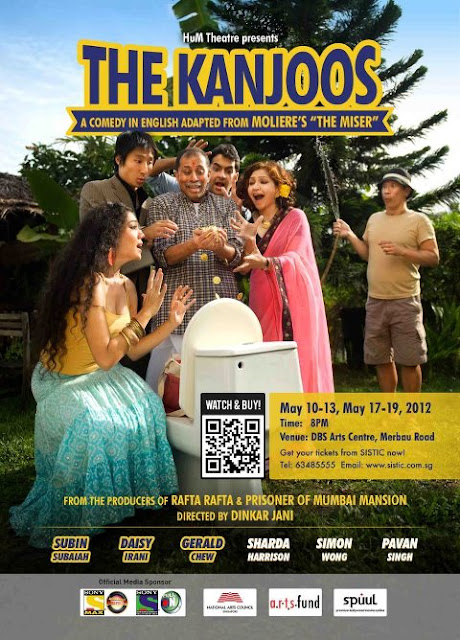 To that end, I was somewhat disappointed with this garish, slapstick adaptation of Molière's L'Avare (The Miser), an examination of one man's miserliness and its profound impact on the people all around him. I have been a warm supporter of HuM Theatre and its aim of bringing world theatre to a distinct Indian Singaporean setting. And, indeed, I acknowledge that French farces in general can be quite frivolous - I certainly felt that way when I caught Feydeau's A Flea in Her Ear last year. However, enormous liberties have been taken with Molière's comedy of manners, stretching credulity and patience to nearly breaking point. Do we really need references to combat resistant army potties (CRAP) and repeated dimming of the lights? It's hard not to feel one's laughter grow increasingly constipated as the play goes on.

The Kanjoos is set in Singapore's Serangoon Road and features a multi-racial cast. The original script has been given a complete overhaul and is studded with amusing one-liners about local politics and culture: floods! elections! MRT delays! HuM Theatre's best assets - husband-and-wife pair Daisy Irani and Subin Subaiah - are also in fine form. Subaiah commands the stage as the titular skinflint Kanjooswamy, shuffling around with a grumpy air and making great use of the play's many comic asides to vent his spleen. Irani, winner of Best Actress at this year's Life! Theatre Awards, is a veritable scene-stealer as the conniving matchmaker/fortune teller/sex therapist Jayalolita, a self-declared "Mother Theresa with bosoms".

While the supporting cast tends towards blandness, there are decent performances by Sharda Harrison as sassy daughter Priya and Gerald Chew as long-suffering dogsbody Kok. Wong Chee Wai's set fuses the house and garden into a colourful continuous space and shows a delightful attention to detail. I particularly liked the image of teabags drying on a clothesline in the garden: "they are good for 11 dips", Kanjoos declares to a bewildered Jayalolita.

HuM Theatre must be certainly be commended for its boldness and commitment in taking a French classic and making it uniquely Singaporean. However, after the sublimely entertaining Rafta Rafta and darkly comedic Prisoner of Mumbai Mansion, I was hoping to see some variety in their offerings. How about a solid drama instead of another masala-filled barrel of laughs?