A Flea in Her Ear

by Georges Feydeau
(in a translation by John Mortimer)
The Old Vic, London


The Old Vic has gotten all its productions down to a fine routine. When you catch something at The Old Vic, you can expect fantastic sets, great costumes, brilliantly observed characters and an inspired style of directing. And indeed, their winter offering, Georges Feydeau's classic farce A Flea in Her Ear in a translation by John Mortimer, gives one all that. Yet this was one of those plays where the sum of all the parts just did not quite add up to a satisfying whole.

I like farces, I really do. I have seen them to done to great effect by Marc Camoletti in Boeing Boeing and Joe Orton in What the Butler Saw. A farce thrives as a form of entertainment because it is meant to be ludicrous and exaggerated, highly physical in its staging and more than any other type of theatre, it doesn't require very much from an audience except for a dose of good humour and a firm suspension of disbelief. With a script by Feydeau, a veritable master of the French farce, a translation by celebrated playwight John Mortimer that was performed at The Old Vic back in 1966 and Richard Eyre directing, this was definitely on to something good. The plot of Flea essentially concerns a misunderstanding - Raymonde Chandebise (Lisa Dillion) suspects her husband, Victor Emmanuel (Tom Hollander), of having an affair due to his inability to perform in bed and concocts an elaborate ruse to see if he has been unfaithful. She asks her best friend, Lucienne (Fiona Glascott) to write an anonymous letter to Victor Emmanuel inviting him to the notorious Hotel Coq D'Or for a rendezvous to see if he would take up the bait, planning to confront him there. Victor Emmanuel, in turn, is perplexed upon receiving the letter and sends his friend, the debonair bachelor Tournel (Jonathan Cake) who happens to fancy his wife, on his behalf to see what this is all about. To complicate things even further, Carlos (John Marquez), Lucienne's jealous and volatile husband, chances upon the letter and recognises her handwriting, believing her to be cheating on him. The scene is set for all the characters to go hurtling towards the Hotel Coq D'Or for a dramatic showdown.

My first thought as the curtain opened was how the actors seemed to be rushing through their lines at breakneck speed. Yes, there was a certain momentum to be gained by plunging us straight into the mayhem and rapidly laying out the plot but this just made it a whole lot harder getting up to scratch with what was actually being said. Lisa Dillion, last seen on stage in Anthony Page's brilliant revival of Noël Coward's Design For Living, is suitably perplexed and jumpy as Raymonde Chandeboise. Yet, I found myself missing her wry, whimsical stance in the latter play and the frenetic exchanges between her and Lucienne felt rather forced. 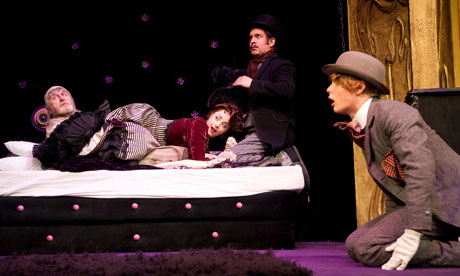 Nonetheless, being an ensemble piece, there are many delightful characters in Flea. Freddie Fox is excellent as Raymonde's nephew Camille who is virtually unintelligible unless he places a metal contraption into the roof of his mouth. Equally entertaining is John Marquez's Carlos, a flamboyant, effete Spaniard whose eccentric mannerisms such as breaking out into a small tap dance routine with no apparent cause were a hit with the audience.

However, the real highlight of this production is the star comic turn of Tom Hollander, last seen in Channel 4's prime-time drama Any Human Heart as the Duke of Windsor. In a fantastic twist, we learn that that the lazy, drunken porter in Hotel Coq D'Or, Poche, is the spitting image of Victor Emmanuel, a double role which Hollander portrays with aplomb. What makes his Victor Emmanuel/Poche so funny is a combination of being short, ineffectual and rather bemused as to what he is doing most of the time. Of course, everyone mistakes Poche for Victor Emmanuel and vice versa, a muddle taken one step further when they unfortunately end up swapping clothes. Seeing Hollander burst out of the stage as one character and burst in as another was extremely entertaining and definitely sustained the comic mood as the pandemonium reaches its zenith.

My main gripe was that I felt that everything one wanted to see in this production happened in the first two Acts which were run together without an intermission. I'm not sure if it was timing that led Richard Eyre to choose one intermission instead of two (unlike Anthony Page in Design for Living) but it made the final Act seem very much a poorer cousin. Perhaps breaking for an interval right in the middle of the Act II, maybe at the exact moment that we learn that Poche is a dead ringer for Victor Emmanuel, would have been a better way to sustain the excitement. By the time the third Act rolled round, I found myself rather impatiently waiting for the double identity to be discovered, the couples to be reconciled and order to be finally reasserted as Raymonde declares "I just had a flea in my ear!".

Rob Howell's sets are indeed beautiful. I felt the drawing-room in Act I a little austere for my liking but it proved a perfect contrast to the elaborate set of the Act II, in the Hotel Coq D'Or, which is gorgeously decked out in shades of purple and gold, all complete with a bed that swivels round at the press of a button, a curving staircase and lurid gold statues.

Farce has as a set of conventions that make it quite different from a regular comedy. Eyre's production lived up to them for the most part but I could not help feeling that there was a rather heavy hand running through. Yes, the many entrances and exits were done perfectly; the climax of Act II was an exercise in precise directorial orchestration that saw all the characters scrambling around in a mix of fear, bewilderment and rage whilst hotel guests spilled out in varying states of undress. However, there seemed a conscious need to underscore and over-egg the script where a little bit of innuendo would suffice. All the sexual puns are beaten to death and the repeated chanting in unison in the final Act comes across as both irritating and artificial. I suddenly realized that I had stopped laughing and that is never a good sign. Farce is meant to be thoroughly silly, but it has the capacity to occasionally rise above the melodrama and offer a wry observation or two about society in general. Feydeau's script certainly allows for that. If only Eyre had allowed the words to speak a little more for themselves.

At any rate, entertainment is entertainment and The Old Vic has delivered a good one once again. I somehow suspect I would have liked it a whole lot more if I had caught it during the Christmas season when everyone tends to be in rather high spirits (pun fully intended). But in this case, it just fell a little short.