I remained unconvinced by English-language opera after watching an operatic interpretation of King Lear by the English National Opera last year that effectively involved cast members singing out entire fragments of Shakespeare's text. Perhaps, I recall thinking, some types of artistic expression were best experienced in their original form.

Yet, this fresh, energetic production by OperaUpClose in association with Soho Theatre couldn't help but pique my curiosity. La Bohème, one of Puccini's greatest works, as an English-language opera set in the present day and performed at a small Off West-End theatre? Could it possibly work? I thought not, but wasn't Jonathan Larson's Rent, which won the 1996 Tony Award and Pulitzer Prize for Drama, itself a modern retelling of La Bohème?

This new version of the opera, written and directed by Robin Norton-Hale, premièred at the Cock Tavern Theatre in Kilburn in December 2009 to excellent reviews. It went on to run for six months, making it the longest continuously running opera in the world. And this revival at the Soho Theatre has lost none of its raw, sweeping charm.

Norton-Hale's libretto relocates the action of the opera from 1830s Paris to twenty-first century London. Rodolfo (Robin Bailey) is a struggling writer whose novel has not quite taken flight and who is reduced to writing articles for an online magazine. His flatmate Marcello (Laurence Meikle) attempts to make modern art paintings that end up cluttering the floor. Their radiator does not work and it's absolutely freezing. As we take in their messy flat, filled with bric-à-brac such as old newspapers, posters for music gigs, random party photographs and half-empty bottles of wine, the scene strikes a familiar chord: everyone who has been a student or lived in a gritty London flat knows exactly what this is like. And watching an opera where the actors are all in their twenties and which is actually taking place at Soho itself makes the world of Rodolfo and Marcello that much more believable, bringing about a familiarity that a big opera house and a mature cast simply would not bring. 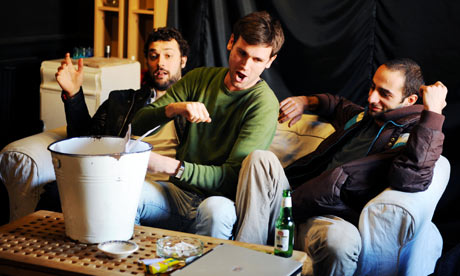 The biggest issue for opera purists would be the substitution of an entire orchestra for a single piano. While it may be seen as reductive, Andrew Charity's musical direction is perfectly adequate and the score captures the overall mood of Puccini's opera and its key musical themes well enough. The music has been re-worked to fit the new translation but retains the capacity to tug at all the right emotions. I still found the duet between Rodolfo and Mimi when they first meet in the dark (O soave fanciulla in the original opera) to be beautifully romantic and heartfelt.

The first Act flows smoothly as Rodolfo and Marcello lament about their lives and are then joined by their friends, Schaunard and Colline. While finishing up an article before joining his friends at the pub, Rodolfo meets Mimi, a Ukrainian cleaner, who comes to borrow change for the gas meter. She loses her key, the lights go out at their building and the two of them fall in love. The English translation works amazingly well and is thoroughly contemporary without being jarring, with references to Dean Street and David Cameron alongside more amusing anecdotes about how they should just make do with basic groceries from Sainsbury's: if it's good enough for Jamie Oliver, it's good enough for them.

The real surprise of the production comes after the end of the first Act. As everyone mulls around with their drinks in the downstairs bar, street peddlers start approaching people, touting pirated DVDs and cigarettes. I genuinely thought that these were people who may have wandered into the theatre and were trying to make a quick sale from the theatre crowd. Little did I realize that this actually was part of the action: the second Act tales place in the theatre bar itself! Rodolfo, Marcello, Mimi and their friends soon stroll into the bar and order drinks, paying absolutely no heed to the rest of the audience and settle into a table in the corner. As a spotlight shines on them, I noticed that a piano had been concealed in a corner of the bar.

A particular highlight of this short but wickedly entertaining bar scene are the antics of Musetta (Louise Lloyd), Marcello's on-off girlfriend who makes a loud entrance with a conservative older man and ends up embarrassing him to no end by doing a provocative table dance in a vain attempt to make Marcello jealous. Indeed, at times it feels like being at a tennis match as the audience turn their heads this way and that to see the increasingly heated exchanges between Marcello and Musetta until they finally reconcile with a dramatic kiss. The interactive element works brillaintly; why not act out a scene set in a Soho bar at a real Soho bar itself and make the audience part of the atmosphere? Full marks for authenticity. 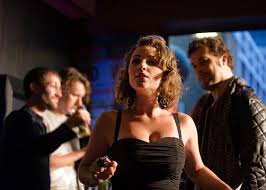 The emotional barometer varies considerably in the final two Acts, set back in the upstairs theatre. We learn that that both pairs of lovers have parted ways and we swiftly move from the hilarious antics of the guys entertaining themselves with cheap groceries to a genuinely moving finale where the destitute and dying Mimi arrives at Rodolfo's doorstep and spends her final moments in his arms. A particularly poignant moment occurs at the very end of the opera where Rodolfo takes a second longer than the others to grasp the fact that Mimi is dead. The music stops as he looks around, realization slowly dawning. When you have an an entire opera set to music, it's incredible how powerful a single moment of silence can be.

OperaUpClose has provided a truly accessible version of La Bohème with this production, and must be applauded for reinventing this very classical art form as a vibrant, engaging form of contemporary theatre and reaching out to an entirely new generation of opera-goers. One can only look forward to their next production, Norton-Hale's new English-language adaptation of Mozart's Don Giovanni, this summer.