HuM Theatre burst onto the Singapore theatre scene last year with their debut production, Ayub Khan-Din's Olivier-award-winning Rafta Rafta. They gave this entertaining British-Indian play about marriage and domestic life a local twist - by making the central couple an inter-racial pair living in Singapore - a choice that only served to enhance the comedic elements of the original script even further. This second production of the company, an adaptation of Neil Simon's The Prisoner of Second Avenue, follows much of the same formula by capitalizing on the star acting talents of real-life couple Daisy Irani and Subin Subaiah and taking a well-known play and tweaking the original setting, relocating the action from 1970s New York to present-day Mumbai.

It's been a good forty years since Neil Simon's Prisoner first hit the stage. Despite all the decent acting and production values, a recent West End revival fronted by Jeff Goldblum and Mercedes Ruehl that stuck to the original setting revealed the play to be slightly tired and stale, a "prisoner of Broadway feel-good convention". A fresh Indian adaptation of the play therefore seemed an inspired choice, one that would be sure to breathe new life into a slightly dated classic. Evoking a merry Mumbai vibe from the outset, audience members were handed little packs of chana (chickpeas) from a "street vendor" to munch on whilst waiting in the foyer. 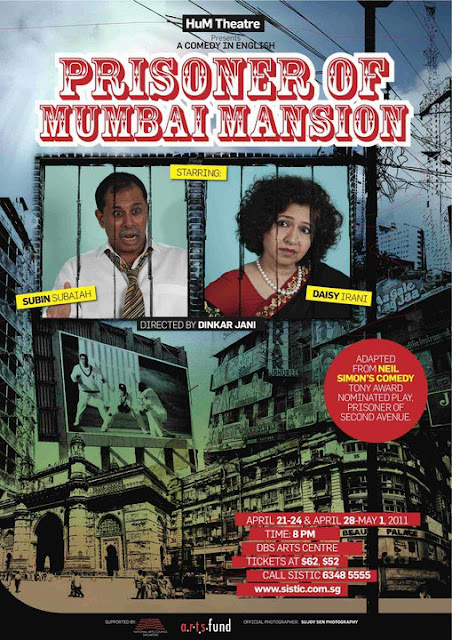 And indeed, modern-day Mumbai, the so-called "Maximum City", is in many respects the ideal backdrop for the play - a thick urban jungle of skyscrapers, noise, grime and crime. Sam Bandookwalla (Subin Subaiah) and his wife Ruby (Daisy Irani) are a middle-aged Parsi couple living on the fourteenth floor of a nondescript high-rise apartment. Sam is practically driven to insomnia from an air-conditioning unit that refuses to work, a job on the brink of collapse, annoying neighbours and the general state of pollution that pervades the city. Ruby tries her best to distract him but to no avail.

Irani and Subaiah, whose masala-hot chemistry on both stage and television needs no introduction, are the perfect choices for the leading roles. Director Dinkar Jani deliberately allows the play to be performed slightly over the top, a decision that would have been garish and stagey in any other context but which works extremely well with two native Indians in a brash Mumbai setting. From the start, Simon's trademark one-liners bounce off the page and produce a steady stream of laughs as Sam slouches around in his pajamas with a baleful air, venting his frustration on everything from stray dogs barking outside to a pair of frisky air stewardesses next door. However, one cannot shake off the feeling of increasing claustrophobia and tiredness as the first Act ploughs on with just two actors, the banter slowly starting to grate.
A particular highlight of the play is the excellently recorded news blasts that punctuate the end of each scene. With Amit Joshi as a fictitious news anchor, these replace the radio voiceovers in the original script. HuM Theatre's version of the play also uses these blasts to a provide a tongue-in-cheek commentary on the state of Indian politics, crime and general mayhem that goes on in the city alongside the events in the Bandookwalla household. The prospect of Amitabh Bachchan stripping nude on a film set due to the heat and being called "Big B" and a captured police inspector being forced to undergo a sex change are just a few rip-roaring examples.

There is good support by Sunita Kapoor and Sonja Steinmetz as a pair of penny-pinching and weepy sisters respectively. However, Darius Tan's portrayal of Sam's older brother seems distinctly incongruous. One wonders what the point is of casting a youngish Chinese actor in this most Indian of plays, one whose very patchy accent does not help in suspending the disbelief any further. Tan's character is also unfortunately not explored in any depth; the overtones of a largely ignored older sibling who has nothing to fall back on but his material success scarcely intrude.
Prisoner of Mumbai Mansion continues to tap into HuM Theatre's niche in English-language theatre aimed at the growing Indian expatriate community in Singapore. While enjoyable for the most part, I was ultimately left feeling that it was the choice of play that perhaps did not work quite that well for this production. Simon's play has indeed aged in the four decades since it was written and it requires more than a superficial rewrite to work for a Singaporean audience. The script could also have easily done with some editing, especially in the first Act, to keep up the energy and pace.

A good evening out with plenty of laughs from Irani and Subaiah but after the rollicking ride that was Rafta Rafta, one cannot help but feel that the bhangra has lost a bit of its steam.