based on the novel by Mary Shelley
adapted for the stage by Nick Dear
National Theatre (Olivier), London

Mary Shelley's 1818 novel Frankenstein has an enduring role in popular culture as the quintessential gothic horror story. A creature fashioned out of human body parts, with an appearance so ghastly that even his own creator abandoned him, this is one fictional character that is truly larger than life. In Academy Award-winning director Danny Boyle's visually stunning production and Nick Dear's incisive script, this classic tale is brought to the stage and given a particularly human slant.

One of the most exciting aspects of this production of Frankenstein was Boyle's choice in having the two leading actors alternate the roles of maverick scientist Victor Frankenstein and his Creature. It was Boyle's belief that this would keep the production fresh and with stars like Benedict Cumberbatch and Jonny Lee Miller, it was no surprise that fans had booked themselves in for two separate performances to see each actor in a different role. I debated long and hard about which version to catch and finally decided on the one with Cumberbatch as Frankenstein and Miller as the Creature. A week before my performance, an email from the National Theatre duly reminded me to get there in time so as not to miss the opening scene. I was intrigued. Entering the Olivier Theatre for this production gives one a strangely elemental feeling: the stage is a vast, reddish oval expanse with a circular contraption in the middle. There is a huge chime that is rung every few minutes before the play begins, its echoes reverberating round the auditorium with a protracted, pendulous persistence. This atavistic mood is indeed apposite for a play whose subject matter deals with a reversal of nature itself: the creation of life from death.

The much-vaunted opening scene takes us straight to the birth of the Creature. On a darkened stage, we see something wrestle behind the curtained portal and a human being eventually bursts through, scarred and naked, onto the floor. The rest of this arresting, wordless prologue shows the Creature slowly gain control of his physical faculties as he learns first to crawl, then kneel, then walk and finally run around the stage in wild, childlike ecstasy. It is like watching a snapshot of evolution in progress, and one of the most arresting play débuts I have ever seen.

We then move through the early encounters of the Creature's life: him being shunned by society due to his appearance, learning about the elements and finally discovering acceptance by a blind old man, De Lacey (a quietly moving performance by Karl Johnson) who takes him in and teaches him language and reason. Miller does a tremendous job in capturing the Creature's growing self-awareness and it is very difficult not to empathise with this character, one who doesn't understand why everybody runs away from him and why he doesn't seem to belong anywhere. There is a beautiful scene as Miller's Creature stands outside De Lacey's hut and experiences snow for the first time, trying to catch the snowflakes and being absolutely delighted at the prospect of this miracle of nature. 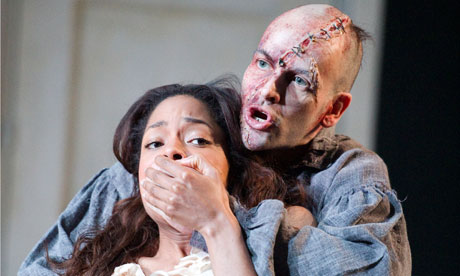 Dear's script highlights the essential humanness of this monstrous beast; when asked what he likes about Milton's Paradise Lost, he replies that he identifies less with Adam and more with Satan, the fallen angel. Deep down inside, we see that in the Creature there is just someone wanting to be loved and who wants a place to belong in the world. Yet when De Lacey finally persuades the Creature to meet his son and daughter-in-law, they cruelly beat him and drive him away. Just when he finally thought he might be accepted by society, he is treated as an outcast once again. We are shocked but innately understand why the Creature acts with such vehemence towards them and becomes capable of such horrific acts of violence: he is after all a creature of circumstance.

Cumberbatch's Victor, by contrast, is given a slightly muted role. All the early scenes in the novel of him being a young student full of scientific hubris are excised and the play starts with him an a reclusive man, keen to forget about the monster he had created until it comes looking for him. Cumberbatch, last seen in the BBC series Sherlock as the eponymous sleuth and the Olivier award-winning revival of Terence Rattigan's After the Dance, acquits himself well in capturing the simultaneous delight and disgust of the inventor when he meets his Creature for the first time. He reluctantly agrees to the Creature's request to make him a female companion but his eventual abandonment of this project when he fears the repercussions seems slightly unconvincing. There is a constant nervous tension which affects Cumberbatch's performance in the second half of the script when he starts to fear the Creature and what he may do. It would have been nice to explore the psyche of Victor a little more; a visitation from the ghost of his dead brother seems the only point when he displays a rare side of vulnerability.

The visual tableau is truly impressive and Mark Tildesley's set includes effects such as rain, snow, revolving sets and steam engines. There is an epic grandeur about the scenes but perhaps all the fanfare is not needed at times; Dear's script is quietly powerful and would have worked equally well on an intimate scale without all the special effects. The one outstanding detail is the lighting design by Bruno Poet which comprised hundreds of lights bulbs suspended in the air. These would alternately glare with a piercing luminescence, fade to an amber glow or sparkle incandescently, resembling jewels in the sky. 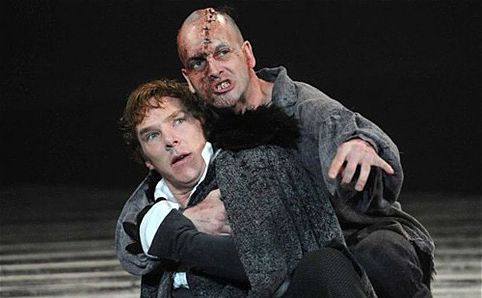 Unlike the novel, Dear's play ends with both Victor and the Creature together in the North Pole, having finally accepted their fate that they are bound to each other. It is perhaps in this final scene, as we see the Creator and Creature head out into the freezing wilderness together, that we realize that they are two sides of the same coin. Both could not find acceptance and ultimately, are all the other has. There is a quiet pathos about their unnatural yet symbiotic relationship and I could not help but wonder how my experience of the play would have been affected had I seen their roles being reversed.

It's refreshing to see an adaptation of Frankenstein that breaks clean of the traditional horror story mould and which manages to be both epic and intimate in charting the emotional landscape of Victor and the Creature. A great return to the stage for Boyle and another brilliant success at the National.