book and lyrics by Steven Sater
music by Duncan Sheik
based on the play by Frank Wedekind
PANGDEMONIUM
Drama Centre Theatre, Singapore


PANGDEMONIUM's decision to stage the Singapore premiere of one of the most celebrated musicals of recent years caused ripples of excitement when it was announced over a year ago and in the past few weeks, Spring fever has descended all over the island like a tropical storm. Indeed, it may seem difficult to understand just what exactly is the appeal of Steven Sater and Duncan Sheik's Tony Award-winning musical. It takes a controversial 1892 play by German playwright Frank Wedekind about teenagers grappling with their sexuality and sets it to rock music. The collision is surprisingly electric. 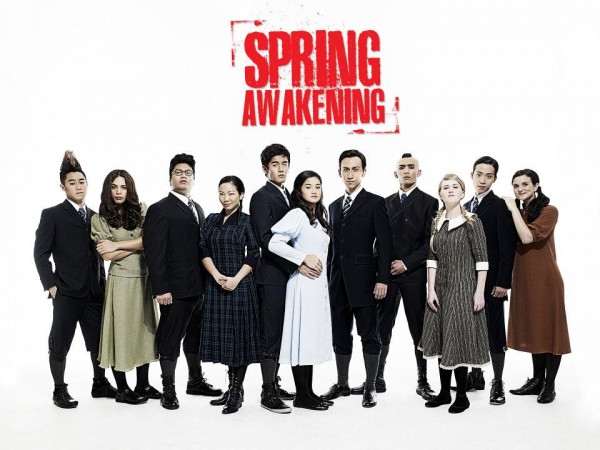 When I first caught Spring Awakening on Broadway five years ago, I was somewhat less than enthused. I remember queueing up for student rush tickets amidst the sound of teenagers belting out the soundtrack, building up my expectations to a feverish pitch. However, I was rather let down by the incongruous feel of watching a period play with hard-hitting themes of teenage pregnancy, suicide and sex which kept breaking out into jarringly modern rock numbers. I can't say the feeling has entirely subsided this time round but I found myself enjoying the vibrant contrast and the dark themes of tradition versus modernity much more.

It is a credit to PANGDEMONIUM for having the courage and chutzpah to mount this edgy musical, one which is not particularly well-known to Singaporean audiences more accustomed to big-name international productions, and for casting a young, relatively unknown group of actors led by teen singing sensation Julia Abueva as Wendla and sultry jazz crooner Nathan Hartono as Melchior.

The spunky, energetic ensemble cast do a very competent job but their relative inexperience in both singing and acting on stage prevents the audience from fully connecting with the plot. Abueva's stunning vocals easily carry her scenes but her acting seems too tentative at times. Hartono nails Melchior's abstracted, bookish charm but one feels that his typical singing style does not gel with the demanding, upbeat songs of the book and more than once, his voice appears to be drowned out by the powerful score. Eden Ang's cheeky, mohawked Moritz is a clear crowd-pleaser but his transition from sexually-curious goofball to desperate, suicidal teen is not articulated very well and there is a lot of focus in getting the style and look of the character down pat (his famous 'jump shot' is now synoymous with the production) but not quite allowing the emotions to land.

There is fantastic support from Adrian Pang and Candice de Rozario who play all the adult men and women, conjuring up a world of "them" and "us" that distances the kids from their traditional and generally unyielding elders who refuse to let them experience the world on their own terms. Apart from the three leads, there are some strong performances by the talented ensemble cast. Rachel Marley as Martha delivers a beautifully harrowing account of sexual abuse at the hands of her father in "The Dark I Know Well" and Rayve Tay is a joy to watch as cocky gay teen Hanschen who expertly seduces his naive friend Ernst.

Tracie Pang's fine direction keeps the many scenes in Spring Awakening flowing well. The kids help each other out with the scene changes and are seen in the corridors between scenes, suggesting a strong sense of community and togetherness. In a delightful added prologue, the Pang boys Zack and Xander flex their comic muscles as a young Melchior and Moritz, suggesting a happy, carefree world where all order is restored when the boy rescues the girl from the evil pirate. Moritz's funeral scene ("Left Behind") is also exquisitely directed. The image of the young Melchior and Moritz horsing around in the background and Moritz's stoic father breaking down in a silent paroxysm of grief powerfully brings out the pathos.

Production values are superb across the board. Eucien Chia, who dealt a winning hand with his poker-themed set for Dealer's Choice, conjures up a world steeped in tradition with his beautiful cathedral set and imposing brick walls. This is cleverly toppled in Act II as a symbol of the world of order finally caving in to youthful impulse. The stage is brilliantly lit by Lim Yu-Beng and I liked the effect of the tin foil backdrop glinting in the light. Kudos also to choreographer Bill Calhoun for communicating the vitality and urgency of youth in the songs, particularly in standout numbers "The Bitch of Living" and "Totally Fucked".

Great entertainment as it is, there are aspects of Spring Awakening that could have been better developed. The disturbing revelations of Ilse and Martha's sexual abuse do not receive any closure and there seems to be barely any time between the pregnant Wendla's nocturnal visit to the doctor and Melchior discovering her grave. As much as the rock musical treatment is inspired (all complete with hand-held microphones being whipped out as the kids break into song), part of me still feels that Frank Wedekind's original play would have been far more poignant. The fact that it was previously staged by Tim Supple in a translation by acclaimed poet Ted Hughes only makes me wish that this would be revived at some point.

PANGDEMONIUM must be commended for its excellent publicity campaign for Spring Awakening. Members of the public were treated to regular Facebook and Twitter updates, rehearsal video diaries on YouTube and roadshows by the cast around town. The Pangs certainly know how to throw a show.

With Spring Awakening, PANGDEMONIUM has tucked a whole quartet of solid shows under its belt: two musicals and two plays. Considering Adrian and Tracie's track record in dramatic pieces, I am all for them to focus on staging classic and contemporary plays. However, it would be difficult not to tap into their Spring Awakening success by putting up quality homegrown versions of West End and Broadway musicals. There is certainly room to develop both in our ever-burgeoning theatre scene and with Swimming With Sharks as their next project, PANGDEMONIUM seems to have both avenues covered.