It's rare to see a theatre event centred around the figure of the centaur, that mythical union of man and horse. In this bespoke edition of their devised performance Flux, Marseilles-based Théâtre du Centaure aims to convey the smooth fluidity of the creature as part of a larger system of flows and fluxes that shape our modern world.

Flux is an hour-long experience that encompasses film, soundscapes and live performances by two actor-centaurs: one male and one female. We are first introduced to the debonair, besuited Manolo in his guise as a forex trader. He strides round the stage on a horse while barking into his mobile phone, waving his arms freely and making spirited remarks. While the localised references don't always hit the mark, the simple beauty of watching the movement of man and horse being so perfectly in sync is more than enough to mesmerise the crowd. 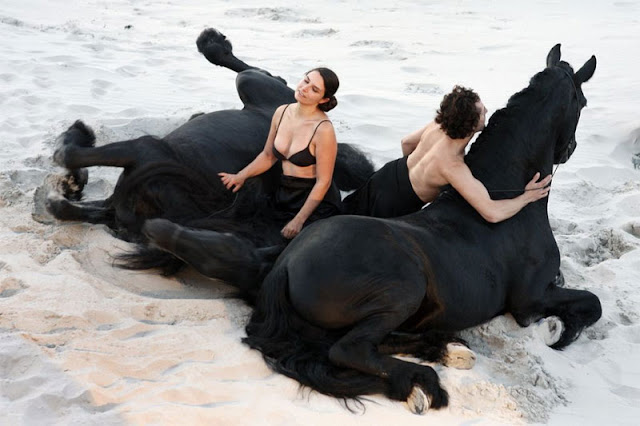 Camille then arrives, majestically standing on a stallion in a flowing black gown, clutching a suitcase. She floats out into the night and we feel compelled to follow her through the Esplanade Park. As she saunters along with a vacant expression, as if in search of something, equestrian-themed images and textual fragments are projected on drapes. At last she arrives at a grassy enclosure and caresses the nearby trees. It seems almost as if she envies them their strength and rootedness, wanting to be part of this symbol of life and vitality. The entire sequence plays out, wordless and riveting, like a dream.

Flux incorporates several film segments. Before the show begins, we are confronted with the image of a horse's mournful eyes and words spoken in overlapping languages. Later, there is an amusing sequence about a centaur exploring the sights of Singapore: shopping in Orchard and playing with dragons in Chinatown. There is also an extended action-adventure film where the centaurs flee from an unknown danger amidst a sea of container ports in Marseilles. They then burst on to the stage, jumping and dancing in fervour. While intriguing and well-choreographed, these filmic interludes are sometimes tedious and tend to detract from the majesty of the live performance.

The finale takes place on a floating pontoon facing the Merlion and brings both an epic and intimate closure to the performance as the centaurs retire for the night on a bed of white sand. The horses curl up next to each other and the two actors go through sensual motions, necking each other like animals before they too surrender to the velvet world of slumber.

Above all, Flux is a visual spectacle that is best enjoyed wordlessly. While the various segments may not fit together as a coherent whole and the attempt to anchor the show in a Singaporean milieu are somewhat piecemeal, this is a performance full of poetry, mystery and romance. It is also executed with finesse by the entire production team and kudos to the incredibly well-trained horses and skilled actors. A galloping triumph.