Lost in Yonkers was the play that finally made critics sit up and take notice of Neil Simon as someone other than a generator of frothy, crowd-pleasing comedies. It premiered on Broadway in 1991, winning both the Tony Award for Best Play and the Pulitzer Prize for Drama. Since then, it has been performed all over the world but surprisingly, it's taken two whole decades for this gem of a play to finally make its way back to New York. This charming Off-Broadway revival by The Actors Company Theater does Simon's bittersweet dramedy about about a Jewish-American family during the Second World War great justice. 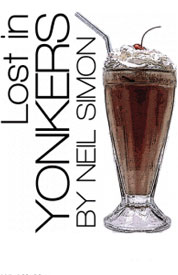 Jenn's Thompson's production gains from its intimate staging at the Beckett Theater. John McDermott's set is sombre and stuffy, a place of old-school values and forbidding traditions. A backdrop of the sky acts as a simple but powerful reminder of the world outside this cloistered family home, aided by clever lighting effects. The costumes also show a wonderful period detail, all the way down to accessories like sock garters and vintage underpants.

The original Broadway staging of Lost in Yonkers was acclaimed for the performances of Mercedes Ruehl as Bella and Irene Worth as Grandma Kurnitz (who reprised their Tony-winning roles in the 1993 film version). Here, it is the kids who make the show, with great work by Matthew Gumley as Jay and Russell Posner as Artie (making a prodigious stage debut). Gumley and Posner have an easy chemistry that brings Simon's trademark comic one-liners to life; at times, they evoke the laugh-out-loud banter of Oscar and Felix in The Odd Couple. They also inhabit their characters with panache, nailing the nasal New York accent. 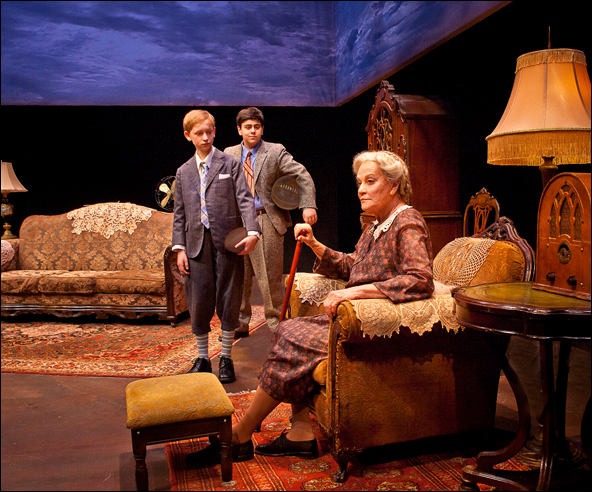 Cynthia Harris is suitably austere and imposing as Grandma Kurnitz, the tough-as-nails German immigrant who believes in suppressing emotion and ruling her family with an iron fist. Yet, her tightly reined-in emotions occasionally display an incongruous lapse. In one of the play's most poignant moments, her son Louie tells her how his siblings who had died in infancy were the lucky ones as they had escaped her meanness. Harris's horrified scream at this point seems a tad melodramatic. At another point, her stifled sob after Bella's outburst makes her look dumbstruck more than anything else.

Finnerty Steeves is a pleasure as the childlike Bella, mixing innocence with a sharper awareness of life's realities. She is particularly arresting in her altercations with Harris and one would be surprised to see how sharp and moving Simon's dialogue can be. I was surprised to see that the ending had been slightly amended. Here, there is no indication that Bella actually leaves the house for good, as revealed by Jay in the epilogue to the original play. It's probably a small point, but I would have liked to feel that Bella had finally gained the confidence and courage to lead her life on her own terms.

It may have taken a while for a revival of Lost in Yonkers to finally return to Simon's native New York and Jenn Thompson's rich, assured production is a reminder that there is a lot of life yet in this beautifully affecting play.