Death of a Salesman


Arthur Miller's iconic portrait of a failed man is probably one of the most well known works of American literature. Combined with a stellar cast and helmed by renowned director Mike Nichols, this stylish, sepia-toned revival of Death of a Salesman is without doubt one of the hottest tickets this spring.

Miller's greatest plays are essentially humanist in their slant: focusing on the faults, follies and foibles of ordinary people. The emotional power of Death is thus intrinsically linked with the actor playing Willy Loman, its famous anti-hero. From the moment Philip Seymour Hoffman shuffles into his house late at night, defeated and crestfallen, to the final scene where he excitedly rambles on about how much his son loves him, it's hard to tear one's eyes away from this fine actor. It is a tender and harrowing performance, deeply felt and movingly rendered. The Tony Award nomination couldn't be more deserved. 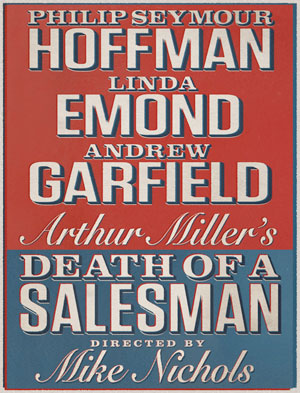 There is excellent support by Linda Emond as Willy's wife Linda, a woman who faithfully stands by his side even as his mind grows derailed and he starts reliving poignant moments from his past. Emond has the remarkable capacity to express a lifetime of quiet acceptance and resignation in a single gesture. As she hollowly tells her dead husband at his grave that she has made the final payment on the house and they are free, it's hard not to feel a crushing sense of anguish at a life lived in vain.

Andrew Garfield as Biff Loman surprised me with the richness and vigour of his performance. I've always felt Garfield to be a somewhat unremarkable actor; he had been disappointing in the film adaptation of Kazuo Ishiguro's Never Let Me Go and rather forgettable as Eduardo Saverin in The Social Network. Here, he shines on the stage, conjuring up a mighty image of a man who has been shaken by his father's infidelity and never gained the heart to move on with his life. He is particularly moving as he stands at Willy's hotel door weeping, full of pain and disbelief at the scene that confronts him. Garfield is also successful in bringing out the realist attitude of Biff which stands in stark contrast to Willy, who lives in a world of delusions and false ideals. 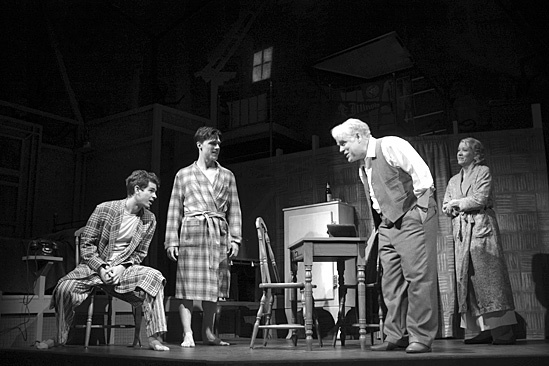 Mike Nichols's superlative production is aided by Scott Lehrer's dense, cluttered set that suggests a quietly crumbling life and Brian MacDevitt's evocative lighting. The scenes blend effortlessly into each other and I found myself amazed at how naturally the plot flowed despite the stream-of-consciousness device Miller adopts. Rich, full-bodied Americana at its finest.