Expectations were high for Tongues, the virgin collaboration between theatre educator Sean Tobin and visual artist Jason Wee, which promised a heady performance about the relationship between faith and sexuality. From the outset, Tongues spread its canvas as wide as possible rather than anchoring itself in one particular format or style. This proved to be its downfall: it lost track of what it was trying to do.

Being a Fringe Festival play, there was every reason to push the boundaries of conventional theatre and offer the audience something different. However with aspects of interactive theatre, verbatim theatre, physical theatre, performance art and even stand-up comedy jumbled together, it was hard to tell if this was a class in Forms of Drama 101 or an actual, organic play meant to be enjoyed by an audience.

Let's start with a quick recap. Tobin and Wee offer us a picture of a morgue. Four recently deceased people (played by Nora Samsoir, Serena Ho, Walter Hanna and Faizal Abdullah) spring to life when the air-conditioner breaks down. Their newly awakened bodies begin channelling random thoughts, manifesting itself in a spate of verbal diarrhoea. The play careers off into a series of episodes exploring various aspects of sexuality played by the four actors. After this goes on for a while, we are brought back to the morgue where the rising temperatures have started to take a toll on the bodies. They begin losing control of their senses and grow more frenzied in their movements. Finally, it all ends - with spectacular bathos - in an existential dialogue between one of the actors and God. Is he there? Is he listening?

The idea of an afterlife being a common thread in many religions is a good one to build a play on. However, this did not warrant the artifice of having recently dead bodies battling with their thoughts as they straddled the boundary between life and death. The play could have been composed of a series of vignettes and still have captured the complex inter-relationships of the theme. It seemed almost that the morgue idea was embraced, abandoned and cursorily taken up again at the end to offer some closure. 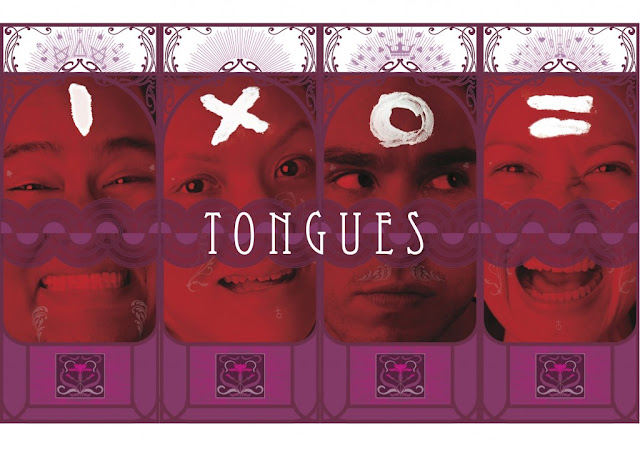 Credit must however be given to Tobin and Wee for putting a lot of effort into obtaining the background material for Tongues. Through surveys and interviews, they have pulled together interesting stories from people of all walks of life that definitely grab one's attention. One of the highlights of the play is a scene where a headmistress (Nora Samosir) lectures the butch girls in her convent school on the dangers of embracing a lesbian lifestyle. Chock-full of every pun on the topic imaginable, it's deliciously funny, not least due to Samosir's brilliant performance and the schoolgirls' ironic gestures behind her back. Another memorable sequence involves a rent boy (Walter Hanna) who wanders into a gospel church and gains acceptance and empowerment from its members. He realizes that their religious fervour (all complete with hand-waving and emotional outbursts) is reminiscent of his own sordid sexual experiences. The only difference is that for once, he does not have to be told what to do. It is a scene that is erotic, wickedly parodic and tender.

Director Sean Tobin breaks up the flow of the play every now and then by appearing on stage and delivering a little speech with the air of a good-natured doctor addressing his patients. We are deliberately made aware of the fact that we are watching actors rather than characters; the cast walks in late and lazily puts on their make-up in front us. The actors are also referred to throughout by their original names. I don't think it's a bad idea to introduce an element of meta-theatre; in a way, it can be seen as bringing out another type of faith: the audience's faith in the play. However, entertaining as Tobin is, these interruptions make the play feel very choppy and poorly thought out. Halfway through a scene, Tobin stops the actors with an exasperated sigh and leads them through a series of voice exercises to get into the mood. At another point, an audience member is asked to fill in the role of "God" for a scene that is then played out as an epilogue (he was apparently not available for the show, we are needlessly told).

More promising are the moments of audience interaction. At the start of the play, Tobin walks around the theatre, posing questions such as "What is your faith?" and "What do you find sexy?" to random people. The uncomfortable responses he met with were indicative of the awkwardness and hesitation most people associate with the subject. It would perhaps have been nice for the play to be followed up with a repeat of this, asking the audience for their thoughts on faith and sexuality after having digested the scenes and thus, building a post-show dialogue and forum session into the rubric of the play itself. The fairly broad and sloping Gallery Theatre is not the best venue to do this: it’s quite a trek to keep scaling the stairs to get a response. Perhaps an intimate setting like The Substation Theatre, Esplanade Theatre Studio or Drama Centre Black Box would have been a better choice.

Tongues, if nothing else, is a play that engenders unease in an audience as we reflect on the complicated intersection of our spiritual and fleshly desires. The aural landscape, designed and composed by Dirk Stromberg, was successful on this count. As I took my seat, I remember turning my head round, thinking that perhaps someone had not turned off their mobile phone. It took me a while to figure out that I was actually hearing ambient sounds that had started playing while the audience was streaming into the theatre. These are continued throughout the play and the overall effect contributes to the sense of discomposure and uncertainty as the unwieldy theme develops.

Jason Wee's set design involving a scaffolding structure with florescent tube lights denoting the temperature was a nice visual touch, though this singular image became jarring after a while. I was also not taken by the costumes, hideous grey and black Lycra tunics that look like a cross between something worn by a scuba diver and an acrobat. How about a basic white or black outfit?

Ultimately, the reason Tongues founders is that it tries to be too many things at once. The concept behind the play is a clever one and I can see this being reinvented as a form of performance art, distilled into a tight, one-act play or turned into an interactive drama workshop which would be very capably conducted by Tobin. Ninety minutes of a drama variety show that is lost in its own swirl of words just didn’t float my boat.