Having had the pleasure of catching Rupert Goold's brilliant production of Romeo & Juliet at Stratford-upon-Avon last summer, I was excited to learn that it was transferring to London alongside several other plays performed in repertoire by the same ensemble cast. I was immediately drawn to Julius Caesar, a play I had always longed to see on stage. It was also a delight to visit the Roundhouse in Chalk Farm for the first time; upon entering the theatre, one is immediately reminded of the Courtyard Theatre in Stratford, with seats grouped on three sides of a thrust stage. 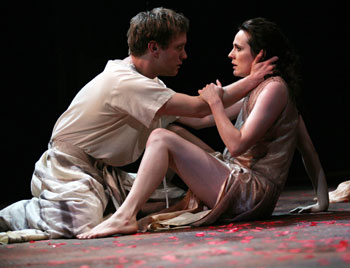 Lucy Bailey's production is a dazzling display of physicality and sheds the classical image of Rome as a place which is all white marble and white togas. On the contrary, violence was part and parcel of life for the Romans. In a wordless prologue, the story behind the founding of Rome is brought to life as two men, their bodies bloodstained and muddy, emerge from opposite corners of the stage. They fling themselves at each other with a ferocious, animalistic intensity, leaping all over the stage under the gaze of an immense she-wolf. These are none other than Romulus and Remus, twins who, as legend tells us, fought each other to death over a plot of land that ultimately became Rome.

Bailey acknowledges in the programme her debt to Shakespearean scholar James Shapiro, who, in his excellent biography 1599: A Year in the Life of William Shakespeare, describes how closely Shakespeare's plays were rooted in the political and social context of their time. The fundamental question that Julius Caesar poses from the outset is whether a state should be subject to political whims, an issue that was by no means a surprise for contemporary Elizabethan audiences. Caesar's military victory coincides with the day of the Lupercal festival, a fertility festival celebrating the birth of Rome. The confusion by the citizens over whether the public holiday was religious (as it had historically always been) or political goes to the very heart of the play and the essence of Brutus' struggle as to how a country ought to be governed. 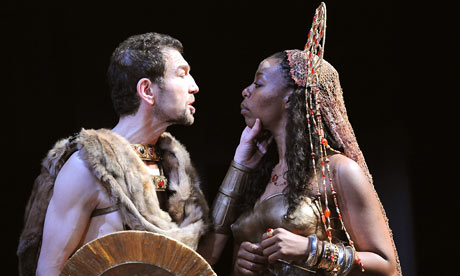 Bailey's production clips along at an incredible pace and within minutes, we are locked in the deep discussions between Brutus and Cassius about the plan to assassinate Caesar to prevent him turning republican Rome into a monarchy. I was pleasantly surprised to note that Sam Troughton, whom I had last seen onstage as Romeo in Goold's production, was in the leading role of Brutus. His anguished scruples about whether he should betray Caesar, his close friend, contrasted perfectly with the determined stance of Cassius, played by John Mackay with the confident, regal air of a man who knows exactly what he wants. I was initially sceptical about Troughton's capacity for the role of Brutus; his boyish and brooding looks jolted my mind straight back to his Romeo and seemed incongruous to the measured, brusque image I had built up of the character. Yet Troughton acquits himself admirably; he uses the opening scenes to slowly demonstrate the shift in Brutus's philosophy, as he gradually convinces himself that the actions of the conspirators are for the greater good of the country.

The visceral quality of Bailey's production is especially captured in the assassination scene where Caesar is violently stabbed by the conspirators in turn. As Caesar struggles and writhes on the pulpit, his robes becoming increasingly stained with blood, Troughton's Brutus is shown to be fraught with misgivings even at this point as he vacillates at the side before delivering the final fatal blow. The emphasis on blood, and blood being mercilessly spilled, is also paralleled to a lesser extent in the murder of Cinna the poet, a innocent man who is mistaken by a crazed mob as one of the conspirators. Indeed, this production goes so far as to visually create the spectacle of the Romans "bath[ing] their hands" in Caesar's blood as intimated in Calphurnia's dream; as they are driven to a manic rage over the death of their beloved ruler, they feverishly anoint themselves with his royal blood. 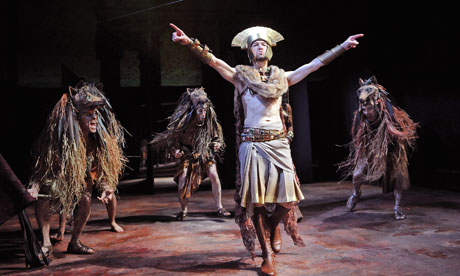 Julius Caesar has always been a play where the characters do not fall neatly into the categories of good and evil. Greg Hicks's Caesar is arrogant and violent, clearly relishing the position of power he has in the country. Are the actions of the conspirators justified, we wonder? Would Caesar have turned into a tyrannical monarch if he was allowed to go on? Brutus, despite his ultimate act of betrayal and subsequent violence, is shown to have to capacity for tenderness; in a touching scene, he wistfully recalls his late wife Portia as an image of her ghost glides across the stage, coming close by never quite touching him. The human cost of the whole political enterprise is not lost on us. Bailey's production also emphasises how Caesar and Brutus are alike in many ways. Both men are preoccupied by the state and how they will be judged by their actions. Both men seem to neglect their wives despite them trying to intervene to stop them from rushing headlong into their political affairs. In a grim allusion to the assassination scene, it is none other than the ghost of Caesar who 'stabs' the desperate suicide-driven Brutus at the end of the play.

Darren de Silva's Mark Antony makes an impressive transition from boisterous, avuncular drunk in an early scene to a fiercely loyal supporter of Caesar who, upon Caesar's death, is spurred into action when he delivers his poignant "Friends, Romans, countrymen, lend me your ears" eulogy to the citizens, prompting an angry uprising that drives the conspirators from town. Having the bloody and lifeless body of Caesar at the front of the stage and hearing Antony's moving words, the scene does not fail to arouse one's emotions at the essential violence of man against man.

William Dudley's set and video design employs the use of six screens upon which various projections of actors appear, seeming to magnify the set by giving the illusion of a charging army or a town gone wild. Rather than cluttering the stage with heavy sets, the only notable prop is the pulpit upon which Caesar is killed, which elevates him in the middle of the stage for maximum dramatic effect. Otherwise, the emphasis is resolutely on the acting and the physicality of the performances. The costume design by Fotini Dimou is also cleverly done: the second half the play sees all the soldiers clad in flesh-coloured body suits that powerfully convey the impression of bodies covered in blood, sweat and grime.

Indeed, this visually arresting production of Julius Caesar reminds us in a visceral way the horror of betrayal and conjures up the madness of a state where the manipulation of politics inevitably gives rise to pandemonium.