If one catches a big name musical or opera in Singapore these days, there's a good chance it's by a foreign group. Staging large productions are expensive and with so many alternative forms of entertainment available, it's not necessarily the best guarantee of bringing in an audience. It's therefore great that after all these years we have the SLO, which faithfully stages Western operas with all its majestic trappings. I can't say they've had an illustrious track record as far as production quality goes but they have been consistently trying to up the ante and must be commended for it. Their latest production, Mozart's Don Giovanni, is a definite step in the right direction: colourful, well-staged and very entertaining. 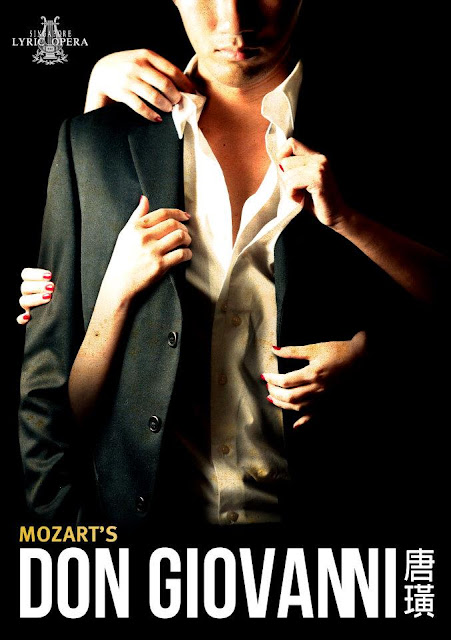 Don Giovanni involves aspects of comedy and tragedy, with a couple of supernatural elements thrown into the mix. There are some pretty dark elements lurking behind this tale of a philandering man who seems to be entirely devoid of a conscience. He leads women astray, wantonly commits murder, breaks up weddings and plainly refuses to mend his ways. Director Tom Hawkes however decides to play up the comedy, play down the tragedy and leave the moral condemnation to the end. The result is an opera which gallops along breezily and then tries its best to put on a serious face in the finale.

This production rests squarely on the shoulders of two lead actors who have an excellent chemistry. Song Kee Chang, who has impressed with his comic antics in SLO's productions of La Bohème and Die Zauberflöte, turns in a great performance as the titular protagonist. Song has a cheeky lasciviousness that makes him incredibly watchable; I loved the point when he began serenading musicians in the orchestral pit (you have to admit, it's quite in character!). Huang Rong Hai plays Giovanni’s long-suffering servant, Leporello. Huang does the role an enormous credit, his chagrined expressions and rakish gestures earning him many laughs. Huang is also a very competent vocalist, and his resonant bass-baritone voice shines in the jaunty "Madamina, il catalogo è questo" aria where he unabashedly chronicles his master's impressive sexual conquests before a flabbergasted Elvira (Ee-Ping).

It's hard to attract top-notch talent to a place like Singapore which has still some way to go before being regarded as a world opera destination. To that end, a lot of the SLO productions tend to flag due to a somewhat lacklustre cast. Martin Ng's Masetto and Melvin Tan's Don Ottavio both proved disappointing compared to their female counterparts, lacking the physicality and stage presence that one needs to carry the melodramatic scenes. Ng seemed very much like the boy next door thrust onto the stage and was not convincing as a jealous peasant. Accomplished vocalist Nancy Yuen, an SLO stalwart, started off being rather stiff but eased her way into the role of Donna Anna, ultimately dazzling the crowd with her rich soprano voice in the "Or sai chi l'onore" aria where she recognizes Giovanni as her father's murderer. Most promising of the lot was relative newcomer Cherylene Lim as young bride-to-be Zerlina. Lim has a lovely, pure voice that brought out the sprightliness of a young lady in the throes of love. I hopes she will continue with the company.

One thing that is part and parcel of traditional opera are fancy costumes and lavish sets. Don Giovanni largely delivers on both counts. Phylia Poh's costumes are a veritable riot of colour, from Leperello’s modish ensemble to the gorgeous black and red masquerade outfits worn at the ball. Christopher Chua's set also proves very versatile and weathers all the scenes with minimal changes and distractions: the garden scene is a simple yet effective splash of greenery, yellow drapes are cleverly used to signify the interior of Giovanni's house and a large cross and candles quickly transforms the stage into a graveyard. Hawkes' direction is generally smooth and the chorus brings dash and colour to the big scenes but never drowns out the intimacy of the individual performances.

The main disappointment was the climactic final scene, where Giovanni, throwing away his last chance at redemption, is dragged down to hell by the Commendatore's ghost. This is the moral high point of the entire opera and one expects a powerful finish. While there is decent lighting and the back structure glows a translucent orange, the whirlpool effect where Giovanni appears to be blown away backwards seemed distinctly underwhelming. There is a rush of light and smoke and a swirling mass of demons but one can't see very much since it  takes place all the way upstage. Since the other supernatural element of the opera, the talking statue of the Commendatore, was done in a simple and understated manner, I expected more of an impact.

The closing chorus also brought out the tonal inconsistency of the production which had been lurking beneath the surface. When Ee-Ping's Elvira declares that she would spend the rest of her life in a convent, the audience breaks out giggling. One can't blame them, the whole opera was invested with such a frothy and light-hearted tone that tragedy, when it does come, seems trite. Even Huang can't quite pull off Leporello's final sombre line about needing to find himself a better master; we've gotten too used the idea of him as the amusing sidekick and just treat the statement as another joke. A gigantic portrait of the crucified Christ descending over the stage tried to strike a suitably sobering note but felt rather heavy-handed. Yes, we get the message: if you fail to repent, there will be retribution, O ye sinner.

That being said, I don't think the finale sequence necessarily detracted from a very competent production. Warm applause greeted most of the arias and Song's Giovanni and Huang's Leporello had the audience eating out of their hands. There were also hardly any technical flaws and I'm pleased to report that, unlike previous productions, the surtitles were coordinated perfectly. The SLO have indeed gathered together most of the ingredients to deliver a solid production and I am confident that as they continue to prune and refine their talents, they will only get better.