Rightly acclaimed as one of the hottest shows in town, Gregory Doran's Hamlet, headlined by David Tennant, is the undisputed jewel of the RSC's 2008 calendar. In this production, Doran offers us an accessible, entertaining and - believe it or not - funny version of the Danish prince's tale without compromising any of the poignancy and pathos of its tragedy.

After capturing nationwide attention as the Tenth Doctor in the hit Doctor Who series on television, David Tennant makes a worthy return to the stage as Hamlet. In a role so often prone to tedious melancholy and painful overacting, Tennant acquits himself remarkably well with an energetic, jaunty and immediately likeable rendering of Hamlet. A young prince deeply upset by his father's sudden death and his mother's hasty remarriage to his uncle, the newly-crowned King, Tennant remains subdued in the opening scenes, wrapped up in his "inky cloak" of gloom until he learns of the foul play involved in his father's death through the reappearance of the latter's ghost. 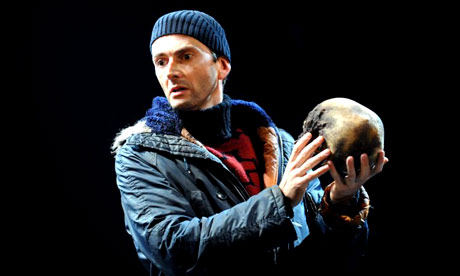 Seeking refuge in a guise of madness, Tennant's Hamlet is consumed by an uncontrolled vigour, breezing on and off the stage in a childlike frenzy, teasing his friends Rosencrantz and Guildenstern, making lewd overtones to his beloved Ophelia and lecturing the company of players on how to act. His famous "To be or not to be" soliloquy is full of pauses, disjointed and bereft of the brooding anguish so commonly displayed by other actors, giving us a more genuine glimpse of a man contemplating suicide. Rather than consciously trying to reinvent the character or giving it a particular slant, Tennant concentrates on delivering a versatile, solid performance that both picks up the tragedy and heightens the many moments of comic delight, especially in the first half of the play. Indeed, with his excellent mimicry and wild-eyed cheekiness, this may well be one of the funniest Hamlets on stage!

Patrick Stewart gives a stunning performance as Claudius. Shunning a stereotypical portrayal of the Shakespearean villain, he gives off a sophisticated air at the start of the play as a dignified, bespectacled monarch in impeccable evening wear addressing his court. That he is capable of murder and treason seems almost impossible to believe. Only later does he gradually reveal the deeper, dastardly streak within his nature as he plots to finish off with Hamlet. Stewart also doubles up as the chilling, fully-armoured Ghost of Old Hamlet with a superbly modulated voice that sends shivers down one's spine.

Amongst the supporting cast, Penny Downie channels a Gertrude who is uneasy and guilty even amidst all her regal splendour, her apparent composure finally shattering in the clost scene where she is confronted by an enraged Hamlet. Oliver Ford Davies' Polonius is a crowd favourite with his blubbering circumlocutions and Edward Bennett is great as protective older brother Laertes, who is (rather cheekily) revealed to have stuffed condoms in his suitcase after lecturing his sister on chastity. Especially arresting was Ophelia's (Mariah Gale) descent into madness; the scene of her mournfully handing out wild flowers to the others after her father's death being heart-rending.

Doran is a masterful director who remains in full command of this formidable text while letting the actors have fun with their characters. He chooses to place the interval at the most unlikely of places - right in the middle of a line - such that first-timers may actually spend the interval thinking that Claudius was going to be killed by Hamlet. The contemporary costumes make the characters all the more familiar - seeing Tennant in a beanie and Ophelia in a sun-dress is quite endearing.

The production is complemented by many excellent technical details. Robert Jones's imposing set of mirrored wall panels eerily reflects the audience and cracks magnificently when Hamlet shoots Polonius during the closet scene. Great use is made of lighting in the play - the opening scene relying purely on the use of flashlights by the actors, chandeliers descending majestically as the scene is set for Claudius's court and Hamlet carefully angling a mirror to send a beam of light careering up and down the audience as he tells the players how the aim of a play should be "to hold, as 'twere, the/mirror up to nature". The hilarious dumbshow before the play-within-the-play was especially enthralling, the poisoner descending from the ceiling in a display of suave gymnastics.

RSC's latest production may well introduce Hamlet to a whole new generation of theatregoers as it continues its highly successful run in Stratford and subsequently in London this winter. By firmly steering clear of depressing, languid melodrama, Doran has given this classic tragedy a fresh and innovative flavour and most people would agree that it is very, very palatable.