Cooling Off Day, the headlining production of last year's Singapore Theatre Festival, is back. Alfian Sa'at's thrilling piece of verbatim theatre is based on interviews conducted by the playwright with Singaporeans from all walks of life both before and after the 2011 general elections. Their words are pieced together in a series of monologues to form a rich tapestry showing the spirit of the country during this landmark event.

The ensemble cast of six are fantastic, delivering their scenes on a bare white stage with assorted photographs of the elections being the only embellishment. Particular praise goes to Najib Soiman and Peter Sau for nailing each one of their characters they inhabit, spanning the gamut from thigh-slapping caricature to sombre introspection. Janice Koh (now a Nominated Member of Parliament representing the arts industry) replaces Tan Kheng Hua and performs very commendably. 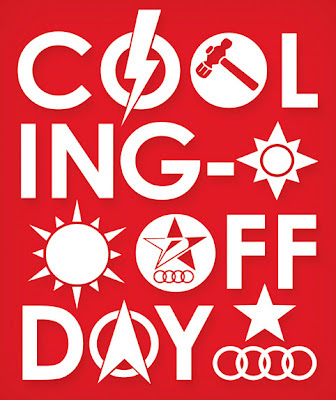 The play has been through some edits since its first staging and no longer feels tedious and repetitive, as had been noted by critics previously. Not to forget juicy last-minute updates: Neo Swee Lin, almost as an afterthought, hurriedly drags one of the red "opposition" chairs off the stage during the finale sequence.

Certain scenes are clearly there to play up to the audience; it's impossible not to be tickled by Neo Swee Lin as she delivers a pseudo American-accented rant by blogger Xia Xue or Rodney Oliveiro with his re-enactment of the mrbrown podcast "The Stall Next Door", coupled with a spot-on impersonation of he-who-must-not-be-named.

Yet what gives Cooling Off Day its resonance is its desire to explore the voices of people at the fringes. Jo Kukathas delivers a moving account of a sex worker who is faithful to her government in the same way she is to her estranged father, Peter Sau reveals the honest sentiments of a PRC masseuse giving advice on being content with one's leaders and Najib Soiman highlights the perspective of a Malay nurse whose family life has quietly slipped down the economic ladder. Co-directors Ivan Heng and Jo Kukathas balance the scenes out well and ensure enough variety in presentation for us to feel emotionally invested in the characters.

One may ask what the point is of staging this play: the elections are over - are these stories really relevant now? I would say that we've now had the benefit of perspective and it's amazing how much that enables one to assess the situation with fresh eyes. Alfian has a knack for rooting out significant observations about everyday life and this is what makes Cooling Off Day so compelling. Are we a country really divided into "Easties" and "Westies" where identity is forged at the neighbourhood rather than national level? What is the rationale of having to be certified that one is of a minority race before running as a GRC candidate? Are we pushing for change purely for the sake of change?

Cooling Off Day offers no answers to these questions but succeeds in making one feel uniquely Singaporean - as conflicted and contradictory as that feeling might be. One cannot deny that it is a vital work of political theatre and I'm glad that the script has now been published by Ethos Books. If anyone wants to get a sense of what 2011 felt like for a Singaporean, I can think of no better place to start.