We've seen the use of technology several times in the theatre. Singaporean company spell#7 by Kaylene Tan and Paul Rae is well-known for its audio plays which blend live performance with recorded soundscapes. In Songbird, a multimedia theatre adventure unfolded entirely through the use of an iPhone/iPad application, where audience members walked around, scanning QR codes at designated spots and receiving clues about the story  of a missing songwriter. 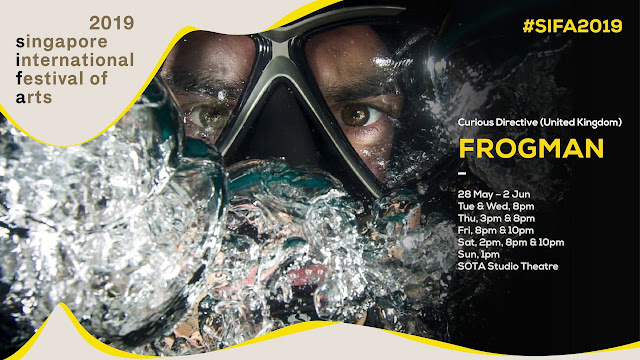 The plot itself unfolds like a good, old-fashioned murder mystery. In the present day, coral reef scientist Meera (Annabel Betts) is being questioned by a detective. Her father has been charged with the death of teenage girl Ashleigh (Milla Webb) who had taken a boat out to sea back in 1995 and gone missing.

Throughout the one-hour performance, scenes of Meera answering questions from the unseen detective are spliced with VR segments with binaural sound that transport us into the murky depths of small town Australia back in 1995. We see the young Meera and her friends in her bedroom and her father, a navy frogman, in his attempt to search for Ashleigh at sea. Director and cinematographer Jack Lowe, designer Camilla Clarke and sound artist Pete Malkin have worked together to create a rich, immersive experience, involving underwater filming in the lush surrounds of Raja Ampat, Indonesia,  a 360-degree film set in Brisbane and a live theatre set that sees audience members sitting on all sides of what resembles a seabed.

Wearing my VR headset for the first time, I am astounded by the three-dimensional richness of the detail that surrounds me. I find myself swivelling in my chair as I take in the scene of Meera's bedroom in all its detail, from colourful aquarium and toys to faded grey carpet. It's almost as if I am eavesdropping on the kids as they talk about forming a coral reef club and the disappearance of Ashleigh over a series of sleepovers filled with movies and sessions of SEGA Mega Drive.

Similarly, one feels that one is actually on a rescue dive mission together with Meera's father as he combs the sea in vain trying to locate Ashleigh, brushing past gorgeous corals. The fact that the VR headset feels a bit like a scuba diving mask makes these underwater scenes even more realistic.

Yet, for all this, the plot of Frogman seems to pack rather too much in, especially towards the end where the tone of nostalgia gives way to something far more sinister. While the VR sequences are fun, one cannot shake off the fact that they still feel like a gimmick. The repeated act of putting the headsets on and breaking out of them is rather disorientating and there isn't a whole lot that is revealed in these scenes which could not have been achieved using the medium of film. The live theatre space also feels rather under-utilised with just a single actor on a chair. Overall, I'm not convinced that the experience is a truly seamless one.

Could the future of theatre involve transplanting oneself into a multitude of exotic environments without ever leaving one's chair? The world of science may still be largely distinct from that of traditional stagecraft but when they collide, the possibilities are endless.