There has been a slew of works responding to the bicentennial of Singapore’s founding by Sir Stamford Raffles, an event that the authorities have chosen to spend all year celebrating through a series of activities such as guided tours, exhibitions and immersive performances. Ayer Hitam: A Black History of Singapore, performed as part of the M1 Singapore Fringe Festival, was a stirring performance-lecture about a community all but effaced from the national narrative despite their inextricable contributions over the years. Miss British, an eloquent commission of the Esplanade Studios, saw three women of ethnic minorities consider the colonial legacy on their lives, mixing historical anecdotes with deeply personal stories. 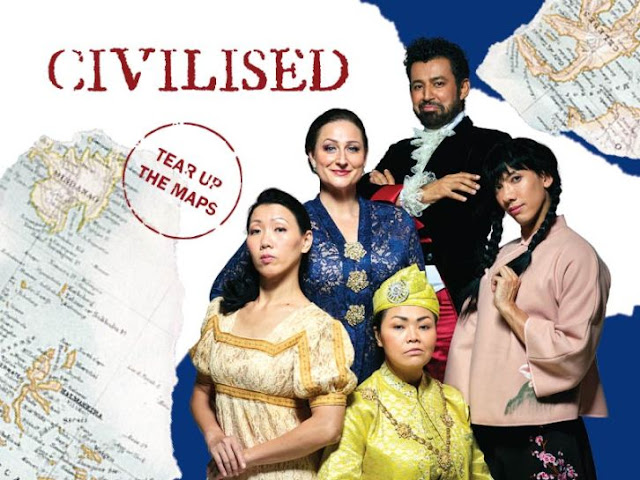 Joining the conversation is The Necessary Stage’s Civilised, playwright Haresh Sharma and director Alvin Tan’s attempt to interrogate the spectre of colonisation. It’s a loaded word – colonisation – one that conjures up images of masters and servants, poverty and plenty and the subjugation of one group of people by another. Is this the only means for us to become civilised?

What exactly do we associate with the words “civilised” and “uncivilised”? The ensemble cast of five actors (Ghafir Akbar, Koh Wan Ching, Lian Sutton, Edith Podesta and Siti Khalijah Zainal) conduct a straw poll of the audience early in the play. Lists are made in two large red books and passed around. Into the former category one hears things like “literature” and “teaching”; the latter includes “politicians” and “chewing gum”. The exercise is funny but also feels completely arbitrary. Who ultimately decides the rules? What makes their view more valid?

We are offered a survey of colonialism and its effects both past and present. Extracts from academics and politicians are punctuated with vignettes from around the world. British officers scoff at the Malay natives of early Singapore and mock their backward ways. A naked brown man is offered up like a prized piece of meat. In a chilling sequence set in one of China’s re-education camps, we see a group of Uyghur Muslims being forced to denounce their religion and culture by nationalist zealots.

In true TNS spirit, meta-theatrical incursions are thrown into the mix. At one point, the actors break the fourth wall and debate what colonialism means to them. Should they eschew the use of English, the language of their colonial masters? Two of them speak in Malay and the Indonesian Minangkabau dialect respectively but realise no one understands them. In a slip of paper found beneath our seats, we are informed that the company has sought to “decolonise” the theatre space: the seating in the black box has been configured so that there is no “hierarchy of audience”. Squeezed on the far right of a thrust stage, I am not entirely sure if this is correct; a more central seat would have made it easier to read the surtitles. We are also reminded to email the company if we “object to any colonial presence in the theatre”. The note gets a laugh but the whole thing is just too contrived.

In an era of fake news, casual terror attacks and political despots, there’s no denying that Civilised tackles important themes and seeks to point out the flaws in our existing power structures. However, the production simply spreads its canvas too wide, being history lesson, verbatim theatre, satire and diatribe all rolled into one. Like TNS’ abstract productions of the early 2000s, the tone lurches wildly from comic to tragic and is full of overlapping, disparate narratives.

Alvin Tan keeps the action flowing smoothly and there is just enough variety to keep us engaged. The talented, versatile cast – many of whom have collaborated several times with the company – also do a great job in inhabiting different characters and enlivening the scenes which play out on Vincent Lim’s white, trough-like set. Nonetheless, one wishes for a tighter narrative, something perhaps more clearly grounded to Singapore and its specific colonial legacies. What we have instead is a play that flits all over the world only to emerge messy, meandering and angst-ridden.

Certain segments work better than others. In a cheeky prelude that riffs on the concept of terra nullius or land that is legally deemed to be unoccupied, the actors remind us that the land we sit on used to be part of the sea. Bowls of salted egg yolk fish skin are solemnly passed round so we can pay our respects to the denizens of the ocean whose home have been robbed. Elsewhere, the scene is set for a not-entirely-fictional Empire Ball, featuring an imagined reunion between Raffles, William Farquhar and the Sultan of Johor who banter in lurid batik outfits. Even in this world, we are reminded that nothing has really changed and local voices (represented by Hang Nadim of local myth) continue to be silenced.

An extended sequence about a group of civilians on a mission to Mars feels rather tedious. They wonder if they can reset the clock and go back to a world without colonisation. Video recordings of these characters are played and we are made to consider their anguish and uncertainty at the brave new world that confronts them. It’s an interesting idea but does not seem to add much to the conversation.

One of the final images we are left with is the statue of Raffles by the river, with fireworks erupting over the manicured landscape. To what extent do we still remain in the shadow of this legacy? Civilised may be a maddening, many-headed beast but it reminds us that change will not come until that statue and all it represents goes. It is up to us to demolish these embedded hierarchies and power structures and re-learn what it takes to make a society truly civilised.


*This review was written for Arts Equator and published on their website on 22 May 2019. See original post here.
Labels: arts equator drama haresh sharma play singaporean theatre the necessary stage