More than forty-five years after first appearing on stage, this sparkling revival of Alan Ayckbourn’s first West End success remains as vibrantly entertaining as ever.

Relatively Speaking is a comic masterpiece centred round two sets of couples. Greg and Ginny have recently started living together. Ginny has been having an affair with an older man, Philip, and sets out to break it off once and for all. To throw Greg off the scent, she tells him she is visiting her parents in the country. Greg follows her secretly, and mistakes Philip and his wife Sheila for Ginny’s parents. To complicate matters even further, Philip assumes that Greg is a younger lover of his wife’s. The scene is set for an afternoon of wild misunderstandings. 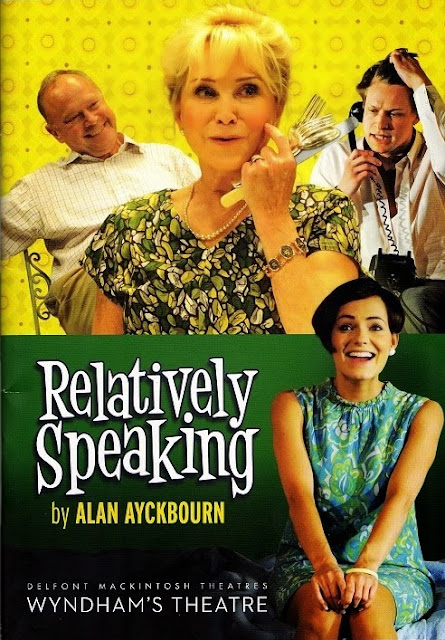 Director Lindsay Posner, who showed a wonderful attention to detail in Rattigan’s The Winslow Boy at The Old Vic, sticks to the late Sixties setting its all its colourful glory. Set designer Peter McKintosh adorns Ginny’s poky London flat in the first scene with period movie posters and bric-a-brac and makes a smooth transition to the genteel patio and garden of Philip and Sheila’s, nicely contrasting the very different social worlds of the two couples.

Max Bennett brings a charming guilelessness to Greg and is a delightful counterpoint to Kara Tointon’s more worldly Ginny, a symbol of the growing sexual liberation of post-war British society. They effortlessly convey the giddy ecstasy of young love and at the same time, the hint of darker times to come; it’s amusing but telling that Greg is carefully kept in the dark about the reality as to Philip and Sheila’s identity throughout the play. The precursor of a life of marital secrets?

However, it is Jonathan Coy and Felicity Kendal who are really in their element as Philip and Sheila. Theirs is a tepid middle-class marriage held together by trading daily pleasantries and routinely ignoring each other, a relationship that almost seems to anticipate the icily cordial Fosters in Ayckbourn’s How the Other Half Loves. Much of the play’s success is derived from Coy and Kendal inhabiting their characters with perfect earnestness. Coy’s flustered reaction to learning about his wife’s apparently long list of paramours (including a man of eighty) is matched by Sheila’s desperate attempt to understand why exactly Greg and Ginny are visiting them at their home. 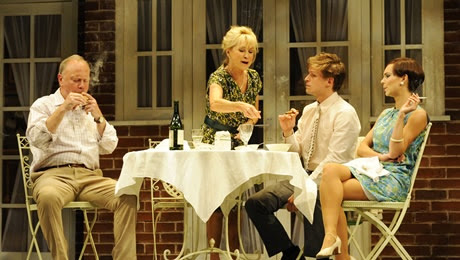 Many of Ayckbourn’s plays delve into the darker aspects of middle-class suburban life and while the mood in Relatively Speaking remains light, it's by no means frivolous entertainment. The themes, even in this early play, are classic Ayckbourn: quietly attenuating marriages and man’s casual inhumanity to woman. There is tremendous craft in the way the play is set up, such that all the characters are utterly confused at some stage or the other but somehow never quite cotton on as to the real situation till the very end. There’s even the hint of mental decay in Sheila inventing lovers to occupy herself while her husband has his fun on his numerous business trips.

It's indeed commendable that Ayckbourn came up with such a tight, funny and cleverly structured play at the comparatively young age of twenty-eight. The comedy flows extremely well and Ayckbourn’s lines, luminous as ever after all these years, leap off the page. A very worthy return to the London stage.