This lesser-known Tennessee Williams play about two people encountering each other while running away from their lives has been exquisitely rejuvenated by Marianne Elliot. The acting and production quality are impeccable. Rae Smith's set and Bruno Poet's lighting echo the rich symbolism of the text with a wonderful attention to detail; peeling hotel walls, harsh morning light and flickering candles are indicative of a life that has seen better days.

Yet Sweet Bird of Youth, about failed dreams and the relentless march of age, does not quite pack the emotional weight of Williams’ better known dramas set in the American South – the Pulitzer Prize winning A Streetcar Named Desire or Cat on a Hot Tin Roof. The plot is far-fetched and the symbolic overtones seem ground to death. A woman has a chance encounter with a guy called Chance? An ethereal girl called Heavenly who wanders around in a white dress in a town called St Cloud? The promise of a new life unfolding over Easter Sunday? 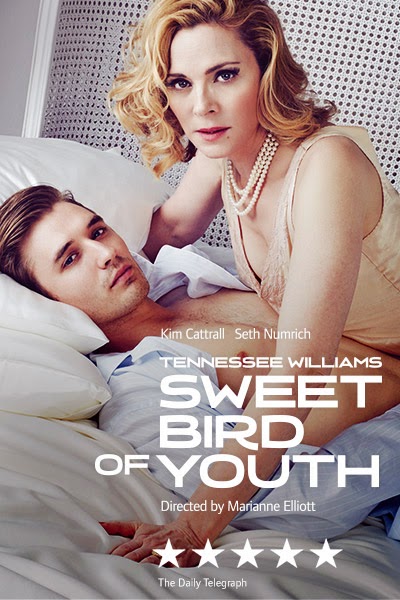 Kim Cattrall is in fabulous form as faded movie star Alexandra del Lago, a woman who is acutely aware of her growing years in the harsh world of Hollywood and has decided to flee the premiere of her comeback film in the company of an attractive younger man. Cattrall is a true joy to watch, captivating the audience’s attention with her instinctive flair for comedy and vulnerability. However, there is not much to the character as the play unfolds and her trajectory – running away from life, meeting a kindred spirit and finally returning to that same glitzy world – feels formulaic.

Seth Numrich, in his London stage debut, is magnetic as golden boy Chance Wayne who returns to his hometown to pursue his childhood sweetheart, Heavenly. Numrich displays an impressive range in his performance: from breezy insouciance to desperation and drunkenness as he sees his fragile life collapsing around him. His does not emerge a likable character at all but the beauty of Williams' writing is such that the plot unfolds slowly and we are never made aware at the outset of the reality behind these characters. Each harbour their own fears and insecurities and seek temporary solace in each other but ultimately make their own journey. 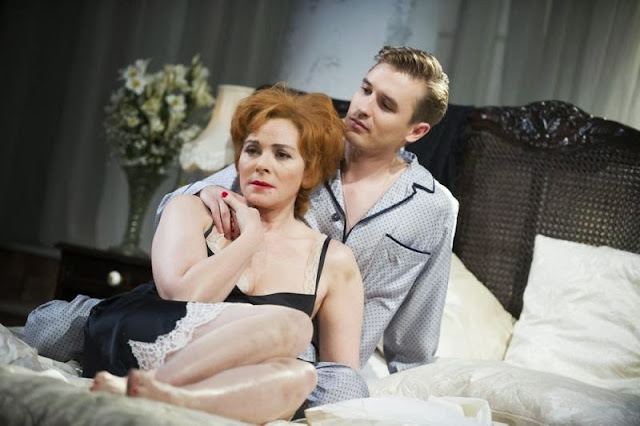 Elliot manages the cast well and does wonderful work in the pivotal opening scene which displays the shifting dynamic between the two leads. Amongst the colourful supporting cast, there is excellent work by Owen Roe, who catches the fiery megalomania of politician Boss Findley, and Charles Aitken as his oily son, Tom Junior. I was less convinced by Elliot's attempt to conjure up the dream-like nature of the play; the scenes of Heavenly wandering behind a screen, complete with eerie instrumentals, seem unnecessary.

Overall, this is an excellent production of a perhaps slightly less than perfect play that highlights Williams’ perennial theme of the emptiness behind the American Dream. More poignantly, it's a reminder of the timeless concern of holding on to one’s youth, that ever precious bird, before it slips away.