Peter and the Starcatcher

by Rick Elice
music by Wayne Barker
based on the novel by Dave Barry and Ridley Pearson
PANGDEMONIUM
Victoria Theatre, Singapore


It's been a serious year for PANGDEMONIUM, with searing dementia drama The Father and a revival of the acclaimed Dragonflies which tackled displacement and identity in an increasingly fractured world. The company caps off its 2018 season themed around 'Hope and Home' with an entirely different creature: Peter and the Starcatcher, a delightful, family-friendly play by Rick Elice based on the novel of the same name by Wayne Barker and Ridley Pearson. 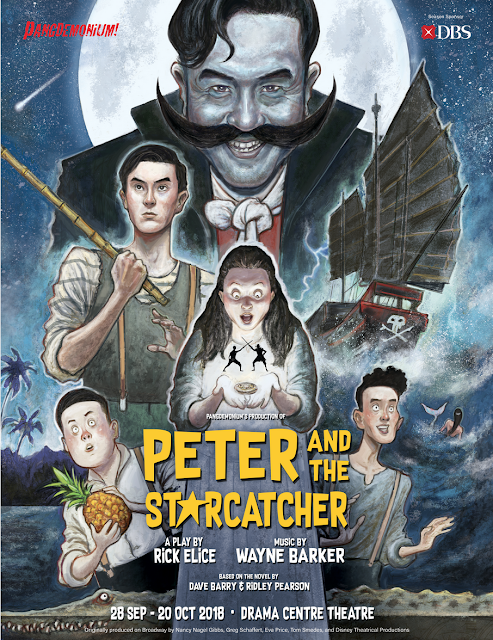 This origin story to J. M. Barrie's iconic character Peter Pan introduces us to Molly, a precocious, 13-year old apprentice starcatcher whose job it is to collect the magical, celestial matter called 'starstuff' as it falls to earth and keep this away from the wrong people. On a voyage to the faraway kingdom of Rundoon bearing a trunk of precious starstuff, she encounters a lonely orphan boy (who later gives himself the name Peter) and the duo navigate pirates, mermaids and crocodiles on the adventure of a lifetime. Crafted as a prequel to Barrie's much-loved play and novel Peter and Wendy, we learn how Peter becomes the boy who never grows up, the Lost Boys who surround him and his first encounter with one-handed nemesis Captain Hook.
Director Tracie Pang and her creative team have put together a magical treat that keeps the audience enraptured throughout. Set designer Philip Engleheart, who has done splendid work on previous PANGDEMONIUM productions such as Next to Normal and Fun Home, gives us a set that unfolds like a giant treasure chest of surprises, whisking us from the creaking gangways of a Victorian ship to a lush tropical paradise. James Tan's lighting, Ctrl Fre@k's sound design and Rizal Sanip and Joel Nah's live musical accompaniment all work wonders in transporting us headlong into this wacky, wonderful world.


The play is buoyed by a cast that comprises some of the best young talents from previous productions of the company such as Thomas Pang (Tribes), Andrew Marko (Falling) and Benjamin Chow (Rent). Newcomer Carina McWhinnie shines as Molly, the spunky, natural leader who refuses to believe there are things a girl is unable to do and makes a terrific pairing against Thomas Pang's athletic, pixie-like Peter.

There is fantastic work from the ensemble cast who play a veritable spectrum of characters with audacious physicality. Scenes are conjured up using the simplest of props, giving the production an endearing, rough-and-tumble charm. In a memorable sequence, Molly crawls along the ship’s passageways, stumbling into a gambling den and chapel with the dimensions and sounds of each space being evoked purely by the other actors. Elsewhere, a giant crocodile appears through the clever use of coloured lights and flags to signify eyes and teeth.

Yet, for all its joyous mania, Peter and the Starcatcher seems unable to decide on its identity. Is this is play or a musical? Does it want to be a family drama with comic elements or a full-blown pantomime? There are superb comic turns by the likes of Juwanda Kassim as local king Fighting Prawn, Crispian Chan as flatulent seaman Alf and Andy Tear as Molly's buttoned-up chaperone Mrs Bumbrake who finds love on the ship. However, the original story of Peter Pan had appealed to all audiences because of the darker undertones that lurked beneath the surface. Here, the raucous comedy and slapstick somewhat neuters the complex mix of emotions.


The second act, for instance, opens with a dazzling cabaret number by the principally male cast in mermaid costumes. The song brings the house down but it's a bizarre shift in tone from the high-octane drama that marked the end of the first half. Likewise, hammy performances smack of pantomime. The chief culprit here is none other than Adrian Pang as Black Stache, the malapropism-spouting, melodramatically-whiskered pirate who serves as the play’s chief antagonist. Pang’s effete take on the character, particularly in the scene where his hand gets chopped off, so desperately seeks to squeeze every last ounce of stage time that it comes across as pure caricature.

Much ado has been made about PANGDEMONIUM adapting the play to a local setting. The action kicks off in the docks of Tanjong Pagar in 1885 at the height of the colonial era and the text features the occasional Chinese song or Malay slang word. Yet, one can't help but feel that these amendments are rather superficial dabs of local flavour. Why not try introducing natural Singaporean voices instead of stilted English accents? How about giving the Mollusks the cultural characteristics of an ethnic group from the region? The company's attempt to adapt a foreign play to a local setting in The Rise and Fall of Little Voice felt a lot more organic and confidently embraced the colour and pizazz of the Singaporean milieu.

PANGDEMONIUM has brought us on a fun-filled voyage to round off the year and Peter and the Starcatcher is certainly a production bound to leave a smile on one's face, regardless of age. I do wonder, however, if the company's ambition to reach out to wider audiences may sometimes detract from its carefully curated artistic identity over the past eight years. As taut, technically accomplished and enjoyable as this is, is it really classic PANGDEMONIUM?