book and lyrics by Lisa Kron
music by Jeanine Tesori
based on the graphic memoir by Alison Bechdel
PANGDEMONIUM
Drama Centre Theatre, Singapore


Welcome to the Bechdel household. The furniture is polished and gleaming. The three children are charming and well-mannered. Family patriarch Bruce, a high school English teacher and part-time funeral director, is well liked by all. But behind this picture of domestic bliss lies a secret that eventually gnaws its way to the surface, tearing the family apart.

Graphic novelist Alison Bechdel's memoir, which recounts her childhood, coming out and clash with her father, is stunningly brought to the stage through Lisa's Kron's deeply empathetic book and Jeanine Tesori's music. PANGDEMONIUM's version of this Tony Award-winning musical is both tough and tender, a fitting end to a terrific 2017 season focusing on the family unit and all its myriad contradictions. 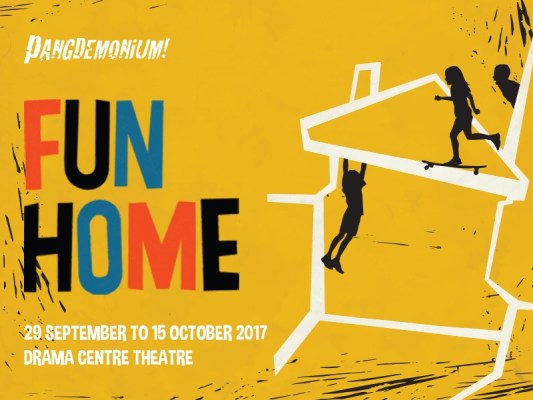 The non-linear narrative begins with a middle-aged Alison (Nikki Muller) in her studio, trying to recall memories from her childhood as she documents her life in pictures. We then go back in time to 1969 where a Young Alison (Chloe Choo/Elly Gaskell) starts to realize that the world around her is not exactly what it seems. Elsewhere, we follow college freshman Medium Alison (Elena Wang) as she tentatively embarks on a journey to discover her sexuality. Scenes from these two younger incarnations are spliced with images of the present day Alison, who quite literally walks through her past, confronting bitter truths and uncomfortable lies.

From the outset, things are not what they seem. Just like how the 'fun' in the title is actually a shorthand for 'funeral', there's a lot of darkness that lurks behind this ostensibly happy and carefree world. Something seems a little off with Bruce though we cannot lay a finger on it. Likewise, Young Alison does not quite know how to deal with her nascent thoughts about gender identity which materialize in her aversion towards pretty dresses and long hair. Part of the power of the musical is that we are complicit in this rediscovery of the past. Our knowledge of what eventually happens colours each scene.

Yet, at the same time, I cannot shake off a sense of frustration at the framing device. Part of me wanted the separate storylines to unfold organically, without the spectre of the adult Alison weighing in on every scene and always remaining in our thoughts. The numerous interjections she makes can be grating and one does not quite need to be given a running commentary on the action all the time.

Director Tracie Pang brings together the various narrative threads beautifully and is sensitive to the intimate, deeply personal message that lies at the heart of this musical: accepting oneself and learning to accept others. Exuberant numbers like 'Come to the Fun Home' where the kids dance around a coffin and 'Raincoat of Love' involving a dazzlingly colourful dream sequence provide nice breaks from the emotionally taut landscape but never seek to dispel the weighty themes.

There are also strong performances all round. Adrian Pang wrenches the soul with a powerful, understated performance of a man desperately trying to hide a part of himself until it becomes too much to contain. His final, desperate speech has one wiping away tears. Nikki Muller is all strident passion as the narrator trying to contextualize her past even as parts of it begin to slip away. However, the real standout is Elena Wang, whose Medium Alison brims with nervous, frenetic energy. Her thoroughly engaging delivery of the solo 'Changing My Major', after she beds Joan, is easily the highlight of the evening.

Fun Home is one of those comparatively rare musicals where the songs are not just filler pieces but advance the plot in a genuinely heartrending way. 'Days and Days', sung by Wilson as the long-suffering wife is particularly poignant, highlighting the quiet pain of a lifetime spent living a lie. Equally arresting is 'Telephone Wire' where we see a daughter trying desperately to connect with her father over a car ride, a song made all the more poignant because of what eventually happens.


PANGDEMONIUM works with set designer Philip Engleheart (whose stellar work was last seen in the company's 2013 season, comprising Rabbit Hole, Next to Normal and Gruesome Playground Injuries) and he truly delivers once again, with a gorgeous fully-realized version of the Bechdel home, oozing with period detail. The way in which parts of the set can neatly be tucked away is also an apt metaphor for the secrets contained within this world and how there is so much more to reality than meets the eye.

This engaging and deeply affecting production cements PANGDEMONIUM's reputation as a stellar theatrical powerhouse keen on unraveling the mysteries of the human heart, no matter how difficult or depressing they may be. We are reminded that not all stories end happily; there are secrets that sometimes destroy an individual, leaving a gaping hole behind. It's up to us to seek out that vital human connection before it becomes too late.