As you’ve probably heard by now, throw all conventional expectations about musical theatre out the window for this one. Eschewing showy, item numbers and a feel-good plot, PANGDEMONIUM!’s latest production, the Pulitzer-Prize-winning Next to Normal, dares to be different in every way. It’s a dark, depressing and bitter examination of mental illness but at the same time, a story suffused with love, humanity and a raw, pulsating energy. 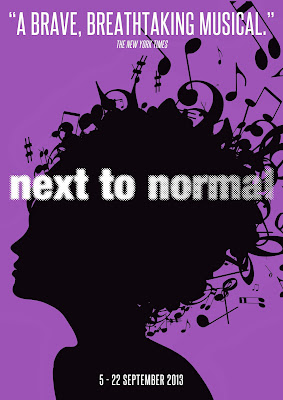 Next to Normal is the tale of suburban mother Diana Goodman and her battle with bipolar disorder following a tragedy sixteen years earlier. Tom Kitt and Brian Yorkey’s music and lyrics do not sugar-coat the details. We witness first hand the toll Diana’s illness takes on her family, from long-suffering husband Dan (Adrian Pang) to alienated, overachieving daughter, Natalie (Julia Abueva). We learn of the side effects from the dozens of pills Diana has to take, we see her attempt at suicide, ordeal through shock therapy and battle with memory loss. The themes are incredibly diverse - we have the imperfections of medical science, the toll mental illness takes on family members, grief and guilt following the death of a loved one, young romance and the fragility of hope.

The plot is delivered almost entirely through song and the eclectic mix echoes Diana’s capricious mental state: tender ballads are interspersed with jazzy pieces and larger chorus numbers. One moment we have the darkly comic My Psychopharmacologist and I, another we have the heart-wrenching Superboy and the Invisible Girl and the deeply stirring I’m Alive.

Heading the cast is West End star Sally Ann Triplett who shows tremendous range as Diana, a woman whose mind vacillates with uncontrollable speed. Triplett brings the lived-in weariness of a middle-aged mother and also conveys the bouts of Diana's mania with a child-like quirkiness that makes us laugh - even as we sympathise with a woman trying to find meaning in a life that seems to have distorted entirely out of shape. Her manic energy in the first act is nicely contrasted with the muted, desperate side we see in the second half of the musical when her medication takes its toll.

Nathan Hartono and Julia Abueva provide great support as the son and daughter. The pair have only got better since their rousing lead performances in Spring Awakening last year. In addition to their soaring vocals, they are equally adept at conveying the nuances of their characters: the slightly sinister omnipresence of Gabe, the tough, emotionally fractured façade of Natalie. Newcomer Linden Furnell shows great promise as Natalie’s goofy but caring romantic interest and Juan Jackson provides a slick, stoic presence as the doctor treating Diana.

Strangely enough, it is Adrian Pang who fades away in this medley of terrific actors. His character Dan seems to be an extension of the husband role he played in Rabbit Hole, albeit one who makes far less of an impact. Pang has never been one to shy away from the limelight, as I have noted several times before (see my review of Swimming with Sharks), and there seems to be an almost conscious choice on Pang's part to exercise restraint here. It's a welcome choice to allow Triplett and the other cast member to shine but unfortunately makes Pang, the weakest singer of the lot, appear a little shabby in comparison to the polished and coiffed younger actors. The one scene where Pang truly shines is right at the end, where he confronts his own feelings about his son and reveals himself to be just as torn and full of emotional baggage. It's a wonderful, quiet piece of acting that wrenches the soul.

Tracie Pang does an admirable job managing the stage action and teasing out wonderful performances that are moving, messy and magnificent. She shows an admirable control of pace and attention to detail across the split-level set, allowing the songs to carry the show but remaining alive to the dark comedy and bitterness that quietly saturate the writing; the songs My Psychopharmacologist and I and I Dreamed a Dance are both beautifully directed.

On the production side, there is uniformly excellent work. Philip Engleheart’s set takes a step towards the symbolic with its bold, brain-like centrepiece framed within the outlines of a face, giving primacy to the mental illness that looms over the play. James Tan’s lighting crackles with iridescent, neon energy and there is especially arresting work in the scene where Diana undergoes shock therapy, currents of electricity zigzagging across the central brain. Joel Nah and his team of musicians also do a good job of handling the large and demanding score (though I rather wished that we had the chance to see the musicians instead of having them tucked away backstage).

It’s rare for a Singapore theatre company to produce two critically acclaimed shows back-to-back (a play and a musical notwithstanding) and, in just three short years, PANGDEMONIUM! have shown themselves to be at the very top of their game. I am particularly heartened to see their emphasis on sourcing quality scripts that emphasise powerful themes (neither Rabbit Hole nor Next to Normal can be considered standard crowd-pleasers) and their focus on nurturing new actors. The future is indeed looking anything but normal for this tough little newbie that has unquestionably joined the big leagues.