It's been a while since PANGDEMONIUM! have delivered a play that truly makes an impact. Their glittering 2013 season saw two critically acclaimed productions - Rabbit Hole and Next to Normal - back-to-back, both Pulitzer Prize winners confronting dark and difficult issues. Despite strong production values and solid acting, I've felt that their last couple of productions have been slightly marred by the choice of script. With this excellent production of Tribes by British playwright Nina Raine, they have returned to the zenith of fine theatre making in Singapore. 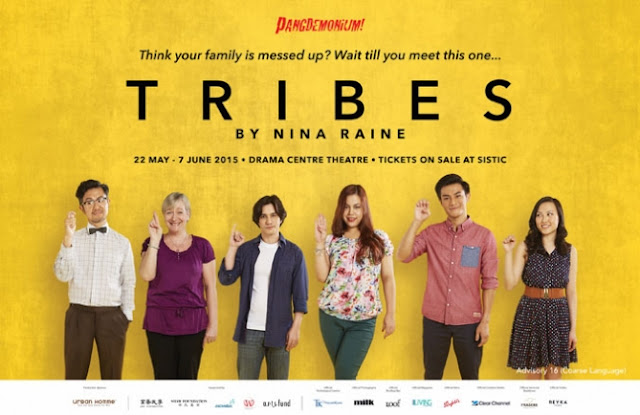 Tribes premiered at London's Royal Court Theatre in 2010 and chronicles the lives of a dysfunctional family living in Cambridge, England. Father Christopher is an acerbic academic obsessing about language, mother Beth is attempting to write a mystery novel, son Daniel is a sarcastic young man working on his thesis and daughter Ruth is a fledging opera singer hopeless in relationships. At the heart of this bickering family who use their words as weapons is youngest child Billy, who is deaf. He has grown up with his family members largely ignoring his disability and has managed to get by through lip-reading.

It is a credit to Raine that Tribes is no token story about a boy battling a world without sound and ultimately finding himself. The fundamental theme that emerges is the importance of communication and how all of us are simply looking for a group of people, a tribe, to achieve that vital human connection. When Billy reveals to his family that he has just met a wonderful young woman called Sylvia (Ethel Yap), who has grown up in a deaf family and is herself slowly losing her sense of hearing, old allegiances are threatened in the face of this newcomer. Billy gains a new lease of life when he suddenly finds himself very much the centre of attention rather than being left on the sidelines.

Tracie Pang and her creative team handle the topic of deafness with great fidelity. Thomas Pang and Ethel Yap have spent the past few months learning sign language with experts in order to authentically portray their characters and inhabit their world. A conscious attempt has been made to reach out to the deaf community in the play's publicity drive and three sign language interpreters have even been brought in for selected performances to allow the hearing impaired to enjoy the play.

The cast, a superb ensemble of six, turn in compelling performances and are thoroughly engaging in their scenes. Veteran actors Adrian Pang and Sue Tordoff convey the tepid undercurrents of a marriage between two middle-aged people with riotous honesty. Gavin Yap and Frances Lee, last seen together in PANGDEMONIUM's Fat Pig, make a delightful pair of squabbling siblings whose weapons of choice are the words they use to puncture each other's egos. Yap in particular makes an admirable transition as his confident, witty façade cracks to reveal a desperate shell of a man who is enslaved by the voices in his head.

The show, however, is carried by Thomas Pang in his stunning professional stage debut as Billy. Pang joins the ranks of actors such as Seong Hui Xuan, Eden Ang, Mina Kaye and Frances Lee who have been nurtured by PANGDEMONIUM! and have emerged as fantastic young actors in the entertainment scene today. Pang displays that rare ability to convey powerful emotions without saying very much and what he does say makes everyone stop to listen to him. The scenes in sign language between him and Yap's character feel entirely organic and his emotionally-wrenching outburst in the second half lacerates the soul.

Ethel Yap likewise makes a very strong impression as Sylvia and succeeds not only in portraying someone who cannot hear what they sound like but the unimaginably painful transition from a world of hearing to one of complete silence. She impresses with her fluent signing and one truly feels for her withered self-confidence as she reveals her pains of turning into a handicapped person whom people look at askance.

Tracie Pang's taut direction drives the play and each scene is handled with her characteristic sensitivity and attention to detail. The entire opening sequence, where loud, overlapping conversations zigzag across the room with increasing intensity, converges on the image of Billy, who feels so utterly alone though he is in a room surrounded by people. Music is beautifully integrated between the scenes in a manner that reminds one of the rich aural transitions in Gruesome Playground Injuries and the use of surtitles capturing words both spoken and sometimes unspoken is heartfelt and hilarious.

Wong Chee Wai impresses once again with his large, fully-realized set that looks like it stepped right out of a lifestyle magazine. However, there are some spaces here that hardly seem to be utilised. Save for the central dining table where most of the action happens, the sitting room, kitchen and staircase areas are rarely used and one feels that the very breadth and scope of the space sometimes engulfs the powerful emotions being explored. Raine's writing also dips slightly in the second half of the play where she throws in one plot point after another without a satisfactory resolution. I didn't quite see the need to delve into Billy being investigated at work, barely a scene after he takes the monumental step of getting a job in the first place.

But these remain minor cavils in an otherwise delightful and thoroughly affecting piece of theatre about the limitations of language and the sound of silence. With Tribes, PANGDEMONIUM reminds us that when learning to understand one another, actions speak so much louder than words.