It's taken American filmmaker Stephen Earnhart seven years to transport Murakami's acclaimed novel to the stage and one can see why. This lavish adaptation of The Wind-Up Bird Chronicle has almost everything that one could imagine: film, holographic projections, dance, puppetry, experimental live music and more. Earnhart's production has a stunning filmic quality but it is ultimately his ability to conjure up, in his own words, "a theatre of dreams" that is most deserving of praise.

Anyone who has read a Murakami novel will be familiar with his lonely, diffident characters searching for some direction in their lives. It's also hard to forget the author's unique brand of "magic realism" which manifests itself through split narratives and alternate realities that can often beguile the reader. Earnhart manages to evoke this meandering, fragmented texture in his production while anchoring it the basic story of a man on a quest to search for his missing wife and cat. 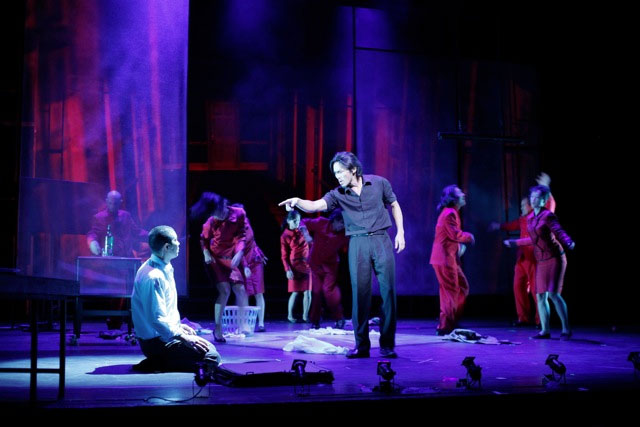 Japanese-American actor James Yaegashi gives a solid performance as Toru Okada, conveying the bumbling uncertainty of the everyman whose life has suddenly taken on a rather macabre turn. There is also good support by James "Shredder" Saito as slimy politician Noboru Wataya and Stacey Yen as Creta Kano, a silky-smooth "prostitute of the mind" who offers Toru words of advice.

Earnhart has the actors perform most of the play in English but the narrative occasionally slips into Japanese. I could see how this served to distinguish the dream-like sequences such as Toru's recollections of his estranged wife or darker moments in the story like the scene of a war veteran recounting his harrowing experiences. However, the linguistic switch seemed to serve no other purpose and I found it distracting having to read the surtitles instead of being able to enjoy the lush visuals unfolding on stage.

Particular praise must go to the puppetry design by Tom Lee which makes use of traditional Japanese bunraku and is used to suggest the dream world of Toru. His sensation of being stuck in a well and romantic memories of his wife are beautifully conveyed through the small, skeletal figures. In a haunting sequence, we see the image of two people lying in bed side by side, physically close but yet emotionally miles apart. 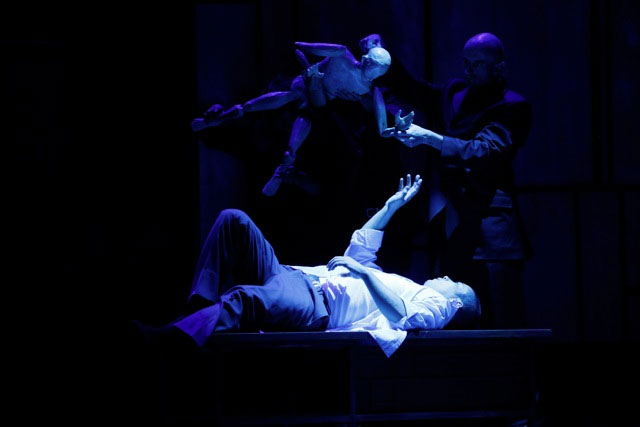 Earnhart conjures up the blurring lines between dreams and reality that feature in the novel in his treatment of the play's many fantasy sequences. A dance show on television is brought to life in an energetic swirl of colour. The image of a jellyfish at the aquarium where Toru and his wife first meet is suggested by trailing an evanescent dress through the air like a wisp of smoke. Indeed, this is Murakami in all three glorious dimensions.

I was initially somewhat apprehensive at the thought of a Murakami novel being made into a play. The film version of Norwegian Wood by Tran Anh Hung proved fairly disappointing, reducing the rich emotional landscape of the book into a saccharine, doe-eyed love story. Fortunately, Earnhart's adaptation of The Wind-Up Bird Chronicle is both visually lush and extremely faithful to the text. It offers no neat answers, refuses to romanticise any of the characters and above all, highlights the constantly fleeting nature of memories that characterise the plot. A magnificent transition from page to stage.