World-in-Theatre's That Clown Called Tartuffe is a light, jaunty adaptation of comic master Molière's 1664 play that canters through the plot of this satirical comedy but doesn't seem to offer any deeper insights. 's black box production claims to make this tale of a religious charlatan more universal and relevant to a modern audience but I left the theatre decidedly unenlightened.

This is a Tartuffe is stripped of sets and props, featuring little more than an assortment of ostentatious period costumes and embellishments. Hairnets, stockings, face paint, blue lipstick, leather? It seemed that one foot was stuck in the 18th century and the other in the world of punk rock. It's certainly interesting that the production is titled That Clown called Tartuffe instead of just Tartuffe, suggesting an element of downright buffoonery about the eponymous character: a falsely religious man who has cast a spell over his unsuspecting patron Orgon who can't stop singing his praises. I couldn't help wondering: were all the characters meant to be clowns in their own right?

While the highly dramatic appearance of the actors may have captured some of the spirit of 's comedy, the acting was far from inspiring. I am of course sympathetic to the fact that World-in-Theatre does not have recourse to a wide pool of actors and is frequently joined by amateurs and other enthusiastic thespians. Yet, this cannot excuse some rather painful performances. Lim Qiu Ping is stiff and screechy as Orgon's mother and there is painful overacting by Ryd Saleh as Orgon's son Damis, whose outburst with his father seems as poorly articulated as his sudden emotional reconciliation.

I was also extremely perplexed that in this version of the play, the character of Tartuffe is given hardly any stage time at all: he saunters on, makes sexual overtures to the lady of the house and is promptly denounced by all and sundry. Philip Marcelo's performance was also disappointing. I sense that Marcelo is gifted with a rich and fluid physical vocabulary that may work well in a dance piece but as an actor in this play, he made very little impact and I struggled to feel anything for his character, a luridly-dressed religious quack who smiles to himself most of the time. 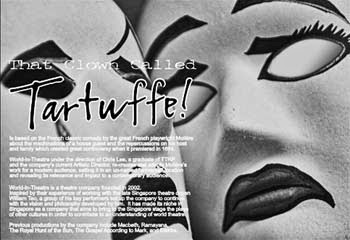 There is a perfectly competent turn by Open Stage stalwart Dhrubajyoti Das as Orgon. Das shows a good range of emotions and is particularly amusing in the sequence where he persuades his daughter that Tartuffe is the perfect match for her, utterly oblivious to her aversion and despair. Kudos also to for providing the production with its few moments of inspired comedy as spunky maid Dorine.

In the post-show session, I was informed that most of the scenes were devised from a basic template and the actors had free rein to improvise as they went along. This process-oriented approach is all well and good but I suspect it also gave the production its rather unfinished, "school-production" quality. The fact that I could only appreciate the actors' efforts a little more when this was pointed out to me was also telling. Perhaps sticking to an actual translation of the text (with a couple of appropriate tweaks) might have been a better choice than a broad brush workshopping approach.

And then there was the music. I think it is perfectly in keeping with the nature of a farce to have moments of heightened tension or comedy underlined by a musical score. However, the live keyboard accompaniment seemed to treat every line as if it were the climax of the play. By the time were about a third of the way through, I was already losing my patience and could barely manage a chuckle. Moderation is of the essence.

In an age of theatre performances that frequently exceed the two-hour mark and grow tedious, it's great to see a production that trots out its plot, laughs and all, in just an hour. That being said, there is a fine line between being punchy and indulging in gross simplification and I suspect World-in-Theatre may have veered a little towards the latter category this time round. I did not feel that I had gained any sense of closure by the end of the play and the moral, if any, was quickly glossed over.


I certainly appreciate World-in-Theatre's commitment to stage world classics and to give relative newcomers a platform to act (and indeed, improvise as they go along). However, this approach does not reap results all the time and suffice to say, this Tartuffe did not come across as a particularly well-executed play, or even an interesting adaptation that offered a fresh perspective. Perhaps there is a case to be made for not tampering with a classic too much. It just looks all the worse when it isn't done well.