We Were So Hopeful Then


Two years after premiering The Orange Production, an exploratory platform to collaborate with new artists, The Necessary Stage returns with two new full-length productions linked by a common theme of issues facing those in the theatre industry.

Kicking things off is Ellison Tan Yuyang's We Were So Hopeful Then, directed by Alvin Tan, a play which explores individuals who work behind the scenes in the theatre. Set in the context of a fictional Singapore Theatre Icon Awards, we delve into the lives of these people whose presence we barely acknowledge yet whose contributions remain so vital to the industry. Do we ever stop to think about them or even thank them for what they do? 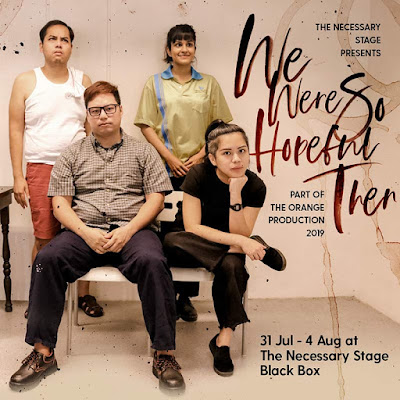 It's a great premise and boasts good performances but the production is let down by a plot and characters which fail to truly engage the audience. We are confronted with broad, forgettable caricatures (the chatty Malay driver, the flighty Indian cleaner) and the dramatic weight of the narrative is bizarrely robbed when we are informed who the winner of the competition is at the start of the play.

I ultimately found myself undecided as to whether We Were So Hopeful Then was intended to be a homage of these individuals and a way to reclaim their stories or a broader critique of an industry that traditionally only focuses on creatives. I'd love to see this piece developed and re-worked in the future but in its current state, it left me somewhat confused and alienated.

I discuss this production, together with companion piece Acting Mad, in more detail with Arts Equator editor Nabilah Said in this podcast.