For the second work of this year's edition of The Orange Production, The Necessary Stage presents Acting Mad, a verbatim theatre piece with texts by Haresh Sharma, Harris Albar and Maryam Noorhilmi. Like its precursor We Were So Hopeful Then, these two new full-length productions probe into issues facing the theatre industry.

Acting Mad is a powerful, sobering work that draws on twenty interviews with theatre practitioners who have experienced mental health issues. The transcripts have been arranged into a performance text featuring four actors and we are confronted with themes like suicide, depression, anxiety and the challenges of coming out about one's condition to friends and family. 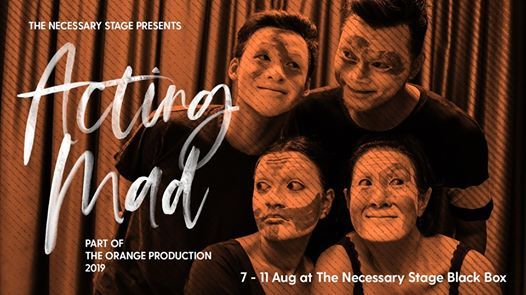 I found it particularly significant to consider mental health from the perspective of an actor. These are individuals who assume roles on a daily basis and bare their souls on stage yet they sometimes struggle to come clean with something so fundamental about themselves. Would hiding these issues be yet another mask they are forced to assume? It's also interesting comparing perspectives between the older generation of actors who are used to keeping their emotions bottled up and the younger crew who appear far more open about their feelings and strongly advocate self-care.

While the subject matter is undeniably hard-hitting, the writers and director Sharma  keep the tone light by injecting moments of levity into the narrative. Music is also used to great effect in scene transitions, setting the tone and leavening the tension.

At the end of the day, Acting Mad is a performance that seeks to open a door and begin a conversation. Actors are just as vulnerable as anyone else when it comes to issues of mental illness and it's important to allow them a safe space to articulate their problems and simply say that "it's okay not to be okay".

I discuss this production, together with companion piece We Were So Hopeful Then, in more detail with Arts Equator editor Nabilah Said in this podcast.