"I don't know how I feel", a character mutters at one point in Eat Duck. It's a simple statement that highlights the very real emotional conflict people have when thrust into the immediacy of death and not having time to adequately process their feelings.

Ah Ma has just passed away. As her extended family, comprising four children and their respective spouses and kids, come together to perform the rites and rituals of a Taoist funeral, old scars and new grievances threaten to disrupt the ordered formality of their mourning. 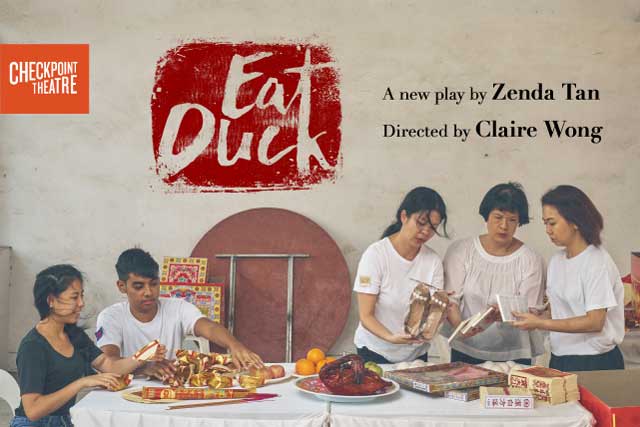 Zenda Tan's debut full-length play, which caps off Checkpoint Theatre's 2019 season, seizes upon a richly theatrical premise to explore the dynamics of a fractious family over the course of a draining seven-day wake. While the play is centred on death, it's really about the impact of grief and how that bleeds into the way we live.

It's a different experience for everyone. For single mother Lucy (Jean Ng in a standout, empathetic turn), the loss of her mother only underscores the other losses in her life - a (presumably) failed marriage and bitter falling out with her eldest son. In the case of Karen (Karen Tan), the funeral is yet another exercise in diplomacy as she is forced to negotiate between her old and new families and keep everyone at peace. Amongst the younger generation, good-natured Lucas (Myle Yan Tay) struggles to articulate his feelings about loss and simply wishes he had spent more time with his grandmother before it was too late.

As older sibling Jerry who returns home from Malaysia, Hang Qian Chou catches perfectly the pompous abrasiveness of that relative we all want to throttle. He struts about like a peacock and is quick to shame his siblings for not according him "respect" despite the fact that he has been absent for years. Is his insistence on outward displays - holding an elaborate seven-day ritual, ensuring that everyone participates in the chanting and assiduously following traditions - just a way of proving to the world that he cares as much as the others for his late mother? Is grief, then, simply a performance?


Much like her mentor - Checkpoint Associate Artist and acclaimed playwright Faith Ng - Tan displays a keen ear for dialogue and crafts rich, relatable characters across the age spectrum. Her use of Singlish in its many colourful variants is both familiar and organic. We are never left in doubt that these are real people whom we have all encountered at some point, be it the rambling aunt or surly youngster.

The play is buoyed by a strong ensemble cast and Claire Wong's assured, sensitive direction which leavens the emotional weight of the text with delicious streaks of humour. Over the course of just a hundred minutes, we get a glimpse into a lifetime of past pains and struggles. Without anything being overtly mentioned, one senses that it has not been easy for Karen to marry into a family of a different racial and religious background. Her husband Daniel (a wonderfully understated Pavan J Singh) likewise doesn't have to say much; he knows more than to interfere with this family and is resigned to his place as the affable outsider.


Some of the most powerful scenes are the simplest. A father quietly breaking down as he realizes how much his son has matured. Two siblings collapsing in each other's arms as they say their last goodbyes to their mother.  When all is said and done, family is family and we simply have to make do with what we have.

It's a pity that this nuanced premise is not matched by an equally tight script. A long, expository opening sequence featuring the various family members at home while Ah Ma lies on her deathbed feels unnecessary and I would have much preferred to be catapulted into the thick of the funeral proceedings. Extended scenes involving just two characters tend to outstay their welcome. An exchange between Lucas and his eager-to-please girlfriend starts off sweet but starts to grate after numerous pregnant pauses.

The unwieldiness extends to the characters. Do we really need to introduce five separate grandchildren, some of whom only make a superficial impact? Considering the comparatively large cast of ten, one wonders what is the point of asking just one actor to double up, playing both an older and younger character. If the intention is to draw parallels between the generations, could this not have been carried out more consistently?


Aaron Yap's gaudy set of colourful boxes, glinting notes and a neon-ridged coffin and the evocative lighting and sound designs by Liu Yong Huay and Shah Tahir add a nice aesthetic gloss which transports us into the trappings of a Taoist funeral. Despite the physical ostentation on display, it is ultimately the emotional phosphorescence of these characters that linger long after the lights dim.

Eat Duck is a quiet evocation of grief, loss and fractured family relationships, reminding us to live our lives to the fullest and carve out a legacy we would one day be proud to leave behind. What will our loved ones say to one another when we finally go? The final image we are left with is a physical feast for the departed spirit. Needless to say, there is even more food for thought.