There may be a certain simplicity, almost crassness, signified by the title but don't let that deceive you. Poop!, written and directed by Chong Tze Chien, is nuanced, complex and arresting, a play that simultaneously breaks the heart and mends it back again.

We start with the suicide of a man (Julius Foo) who jumps off a block of flats, leaving his wife, mother and young daughter Emily to cope with his untimely departure. Emily (Jean Ng) is unable to fathom that her father has really left her and keeps expecting him to pop up everywhere. Things take a turn for the worse when Emily is diagnosed with cancer and her grieving mother (Janice Koh) and grandmother (Neo Swee Lin) are forced to move past their own misery and rally round her. 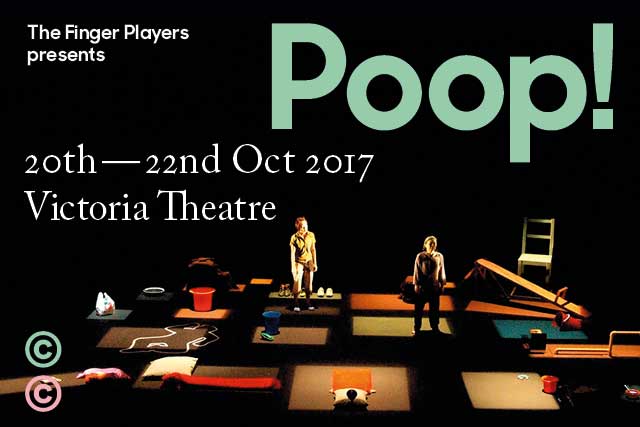 Poop! is a powerful evocation of grief and loss and how it manifests itself in these individuals: the defeated grandmother, the bereft wife and the lonely daughter. The recurring image of Emily being unable to relieve herself in the toilet hints at a deeper emotional constipation afflicting these characters who are unable to confront their real feelings. Yet, at its heart, the play is not about death but life itself - picking up the pieces and quietly, resolutely moving on.

The wife cannot let go of her anguish at being left alone by her husband. In a lacerating monologue, she describes how he permeates every single aspect of her life, from the weather to the traffic to the television. At one point, she tells the grandmother that when Emily passes on, she will move back to Malaysia as there will no longer be any relationship between them. It's only at the very end that she learns to accept the older woman, seeking solidarity in her pain. As the play tells us, "The truth about it is, sometimes in death, people heal."

This restaging of one of The Finger Players' most popular works reunites the original cast from 2009 and 2010, all of whom are stage veterans. The sprightly Neo infuses her scenes with a strong maternal warmth tinctured by humour and Emily is delightfully inhabited by an effervescent Ng. There is equally fine support by Koh as the stricken wife and Foo as the man who keeps appearing, rather cheekily, in the memories of his loved ones. Despite the heavy themes, Chong brings out nice moments of comedy to leaven the emotional heft and there are some entertaining updates to the script, including a riff on Frozen's infamous song 'Let It Go'.

The strength of Poop! lies not just in its substance but in its very execution. It's a fantastic showcase for the company's strong work in puppetry, seen in productions like Furthest North, Deepest South and Turn by Turn we Turn. The play stands out for its wonderful and haunting visuals executed by three talented puppeteers: Ang Hui Bin, Darren Guo and Zee Wong. The production employs black light theatre, where items are manipulated around opaque black curtains, creating interesting effects such as disembodied limbs or a plastic bag simply dancing in the wind. This arresting visual palette is augmented by Lim Woan Wen's sensitive lighting and Darren Ng's soulful soundscapes.

Moving into the expansive Victoria Theatre allows Chong and set designer Ctrl Fre@k to utilize the space more fully and for the visual effects to play out impressively across two levels. Yet, some of the intimacy from the earlier black-box stagings of the play is also lost. Many of the puppetry effects depend on complete blackness on stage and there are times when this is unfortunately not achieved. As much as one may suspend one's disbelief, part of the experience lies in being swept away by the element of surprise and feeling like a kid seeing a really good magic trick.

Chong extracts fantastic performances from his cast and gives us a production of great economy and nuance, one which hits the spot and traverses a mountain of emotions in just an hour. Far from being depressing, Poop! reminds us, ultimately, of the bonds of love which nourish the soul and how this has the capacity to see one through the most harrowing of circumstances.