Children have strange ways of acting out when things don't go according to plan. Some may throw tantrums, others may run away from home or in Robert Askins's cracker of a play, they may throw themselves into the world of puppets.

Margery (Janice Koh) is a recently widowed Sunday school teacher who teaches a weekly sock puppet class at the local Lutheran church. One of the students is her teenage son Jason (Thomas Pang), a gawky kid who takes to his cartoonish avatar a little too easily. What starts out as a series of fun skits and songs turns into full-blown mayhem when Jason's puppet Tyrone takes on a life of its own, leaving a trail of destruction in its wake. 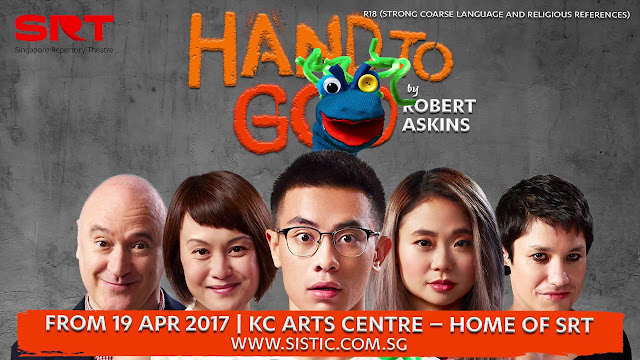 Is Tyrone a demon that needs to be exorcised or is he merely the product of a child acting out in his grief and anger? In Pang's powerful and ultimately empathetic portrayal, we realize that Jason is just a boy who wants to be noticed and taken seriously. His life is spiralling out of control. His mother hides her feelings behind false cheeriness, succumbing to the charms of bad boy Timothy (Gavin Yap) while spurning the advances of gregarious church Pastor Greg (Daniel Jenkins). Meanwhile, the girl Jason has a crush on, Jessica (Ann Lek) remains, frustratingly, out of reach.

Pang, one of the brightest stars of his generation who has won plaudits for his acting chops in plays such as Tribes and Ophelia, delivers a truly standout performance that carries the production. Switching deftly between voices and mannerisms, he provides a nice contrast between the diffident Jason and the booming, maniacal Tyrone, a creature who abandons political correctness in favour of salty remarks and shocking violence.

Guy Unsworth's production of this Broadway hit is tightly paced and suffused with a boisterous energy that keeps its audience invested till the end. However, one has to question some of his casting choices. This is a play rooted in the world of deeply religious, small town Texas and this setting simply does not come across. Koh, an otherwise excellent actor, is ill-suited to play frayed-at-the edges Margery who suddenly tears off her clothes in front of a student. Yap is flippant, louche and very amusing but likewise struggles to convincingly portray a swaggering, sex-crazed teenager.


The accents are another  bugbear. Koh, not for the first time, falters at the American accent and keeps breaking into a more Singaporean register. Jenkins, on the other hand, decides to eschew an accent altogether so we have the image of a polite Englishman in Texas. There are plays where this would simply not matter but this is not one of them. These characters end up feeling forced and inauthentic.

There is strong work on the technical front. Susannah Henry's classroom set (which gets vandalised by Tyrone over the course of the play) is beautifully lit by Lim Woan Wen and full of rich, interesting detail: a noticeboard becomes the interior of a car while a bed pops neatly out of a cabinet. There's also an impressive constellation of objects suspended in the air during the opening and closing monologues which brim with cheeky biblical overtones.

Hand to God is both a terrific black comedy and moving family drama but it ultimately shines as a play about standing up to the truth. Tyrone is that voice of unreason people so desperately need to jolt them out of their daily routines. He exposes the hypocrisy, lies and false pretences we clothe ourselves with to avoid reality.

That religion is one of these things is purely incidental.