If education was a running theme in the theatre over the past couple  of weeks (Detention Katong, Those Who Can't, Teach and Normal), the two big openings this month are set to convince us that school is out and the cabaret is in. As W!LD RICE revives its localised version of La Cage Aux Folles, actress and independent producer Tan Kheng Hua brings us a brand new musical that celebrates an iconic nightlife spot of Singapore's yesteryear.

One may be fooled by the publicity materials into thinking that Tropicana is all flash and period kitsch but playwright Haresh Sharma and director Beatrice Chia-Richmond have crafted a nuanced tale that charts the rise and fall of not just a glorious institution of the past but of a country that has relentlessly forged ahead at the expense of her diverse voices. 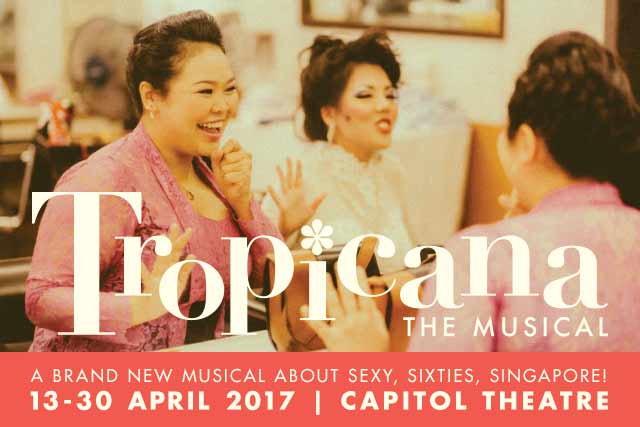 Things kick off in 1968 when businessman Reggie Sim (played by Lim Yu-Beng and based on real life property mogul Shaw Sung Ching) announces the opening of a glitzy Las Vegas-style entertainment complex along Scotts Road, with performances and international acts that would rival any major city. He assembles a formidable team who come together to pull off a show that reels in the crowds.

While we get a sampling of the creatures on stage (brought to life brilliantly by a team of four talented dancers), the musical delves into the lives and loves of the people behind the curtains. The awkward courtship of handyman Sat Kee (Joshua Lim) and bubbly cashier Ima (Siti Khalijah) is nicely contrasted with the clandestine romance between Reggie's middle-aged secretary Katherine (Karen Tan) and a younger American man (Mitch Lagos).

Success, naturally, comes at a price: Reggie battles cancer, a fire razes the building, rival gangsters cause trouble and the ever-increasing spectre of censorship risks destroying the venue he fought so hard to build. Yet, he perseveres and some twenty years on, it's a testament to his leadership and shrewd business acumen that the club continues to burn bright. Lim invests Reggie with tremendous empathy, reminding us that this is a man who genuinely cares for the welfare of his staff as much as material success.

Chia-Richmond navigates the varying storylines with aplomb and keeps the action tight and engaging. She is blessed with a generally strong and likeable cast. There are powerful turns by Sharda Harrison as tempestuous showgirl Pinky, Ebi Shankara as resourceful and avuncular talent manager Muthu and Rizman Putra as louche musician Jeff who enjoys chilling out in local bar Starlight. Unfortunately, not all the actors get a chance to shine: Karen Tan feels somewhat underused and Seong Hui Xuan is reduced to a narrator in a fancy costume.


In between the song and dance sequences, Sharma injects wry observations about Singapore life and the changing times. There's a delicious throwaway remark by a government official (played by Harrison) who declares that the word "revert" should be a compulsory phrase used by all civil servants. Elsewhere, the state clamps down on artistic expression by banning rock music on the radio and severely discouraging the punk lifestyle.

One of the victims of censorship is Vernon (Brendon Fernandez), a free-spirited deejay, who decides to emigrate to Australia because he is left with no room to express himself. His former partying buddy Jeff meanwhile seeks refuge in a newfound religiosity, cutting off his long hair and eschewing drink and drugs. There are no doubt many others like them who have been beaten into submission over the years.

Composer Julian Wong and lyricist Joel Tan set the action to a series of toe-tapping numbers which charmingly blend cheekiness and emotion. Memorable songs include soulful ballad Live Your Life, the wickedly satirical Police vs People and a drunken ode to the pleasures of marijuana, I Swear on Ganja.

The production is rounded out by Tan Ju Meng's beautiful set which effortlessly transforms from the grandeur of Tropicana to the indie chic of Starlight and Tube Gallery's magnificent costumes which are a vivid burst of Sixties chic. Brian Gothong Tan's multimedia projections, particularly in the closing montage, clothe the narrative with a rich sense of history and remind us that we should celebrate the glories of the past even as we embrace the present.