This Chord and Others


In some ways, Haresh's Sharma's 1991 comedy about three friends who grapple with a job promotion, a singing competition and identity politics has certainly aged. Twenty-six inch televisions and cassette tapes, anyone?

Yet, such dated references have more than just nostalgic appeal. They highlight the more important point behind Tim Nga's canny revival for the Esplanade Studios: a lot of the issues explored in the play have, in fact, not changed in over a quarter of a century. 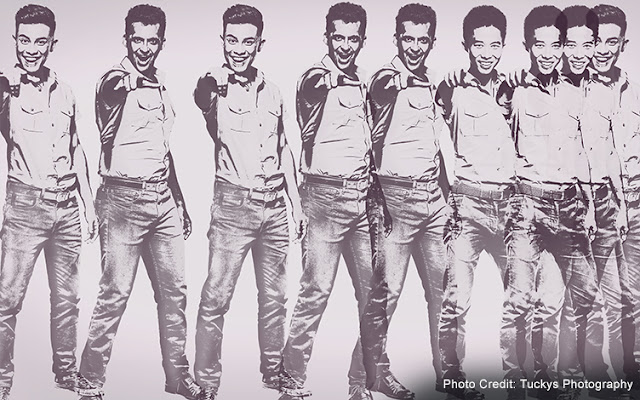 Sharma presents us with three average Singaporean guys: one Chinese, one Indian and one Eurasian. Their routine of easy camaraderie gets a jolt when a senior position opens up in the bank they work in and each man tries his best to secure it, turning them against each other.

The play flits between a surreal present where each character is saddled with a physical ailment that hints at their personal struggles and scenes from the past. Gerald (Neo Hai Bin), a recently converted Christian who has moved out of the family home, is estranged from his traditional Buddhist parents. Dave (Pavan J Singh) has likewise shorn off his Punjabi heritage to blend in (cutting his long hair and anglicising his name from Sukhdev) much to the ire of his mother. Finally, Thomas (Thomas Pang) is an amateur artist discontented with his colourless Eurasian cultural identity and repeatedly talks of leaving the country.

The issue of Chinese privilege in Singapore has come into the fore in recent years, particularly from minority groups who feel that their voices have been all but effaced in the national narrative. A play like Teater Ekamatra's GRC is indeed a powerful reminder of this, cleverly inverting the status quo to throw the spotlight on a community living perpetually in the shadow. So when it's revealed that Gerald gets the promotion instead of the other two, this strikes a chord. Is this purely based on merit or, as Dave bitterly remarks, does Gerald just fit the job better because he happens to be of the right race and is statistically most likely to succeed?

Likewise, it's easy to ignore the concerns of a minority like Thomas who rails against being categorised as an 'Other' in the racial classification system. Because of his mixed heritage, is he destined to be no more than the nation's cosy backdrop - part of a community chiefly known for wearing orchid shirts and eating devil's curry?


In a country that waves the multi-cultural flag, one which meticulously celebrates Racial Harmony Day in schools and plasters its signs in all four official languages, it's easy to forget that pockets of racial and religious intolerance exist. And sometimes, these come from those closest to us. Despite his adopted religion, Gerald's father insists on calling him by his Chinese name and berates him for wearing a cross instead of a Buddhist charm. Dave's mother refuses to entertain the thought that a girl from another race would ever be right for her son. Thomas wryly remarks that despite coming from such a hotpot of cultures, he has no 'mother tongue' to speak of. These are very real issues that many Singaporeans grapple with and it's impossible to ignore how resonant they continue to be.

Yet it would be reductive to think that This Chord and Others is purely about race. At its heart, this is a play about accepting oneself and finding one's place in the world. Do we truly reveal our identities to those around us? What do people really think of us when the niceties are stripped away? In a heated moment, Gerald admits that he may well be a racist for not dating Indian women but Dave is an even bigger racist because he is ashamed of his own race.

The production is buoyed by a passionate, energetic and supremely likeable cast who also take turns playing supporting characters such as a parent or girlfriend. Each actor brings a different dynamic to the action. The articulate Singh commands the stage and excels with moments of comedy while the ever-versatile Pang dazzles with his slick moves and easy charisma. Neo, the most restrained performer of the trio, conveys a sincere, guy-next door vibe that makes his scenes ring with emotional truth.


Nga adopts a simple aesthetic that stays true to Sharma's original text and there is a nice homage to the culture of the era through the use of music. However, there are aspects of the staging that feel laboured. The opening montage, featuring old computer screens blaring scenes of conflict, seems unnecessary. The screens also needlessly clutter the stage and one wonders if there is a greater point to this than establishing a general image of discord and dissonance.

Like so many of Sharma's plays, This Chord and Others is deceptively simple but emerges as a nuanced and richly topical piece of writing. The title itself neatly references the world of music that unites the three friends while acting as a homophone for the 'discord' that just as easily tears them apart. It's a striking reminder that in a system that has tried its utmost to breed meritocracy and treat individuals alike, one cannot ignore the very real differences that lurk beneath the surface.