Those Who Can't, Teach


Hot on the heels of Mandarin monologue Actor, Forty, The Necessary Stage continues its 30th anniversary season with a revival of theatre classic Those Who Can't, Teach. Haresh Sharma's play was first staged in 1990 and reworked for the Singapore Arts Festival in 2010.

Teach is a colourful romp through the world of a neighbourhood secondary school on the cusp of gaining the coveted autonomous status from the Ministry of Education. As the teachers juggle heavy workloads, tight deadlines and irate parents, the students are caught up in the throes of adolescence. 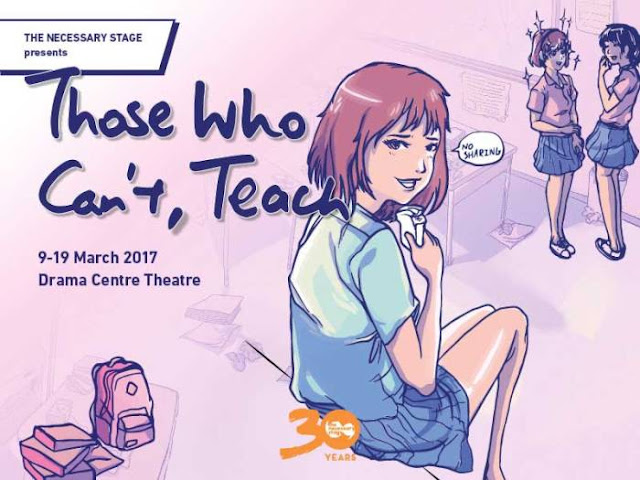 The action kicks off in the staff room. Lim (Lian Sutton), a fresh graduate from the National Institute of Education, finds the theory he has learnt does him no favours in practice. Zach (Joshua Lim), a high-flying government scholar and newly minted Head of Department, is all about policy and procedure instead of making a genuine mark as an educator. Somewhere in between, the jaded Hana (Siti Khalijah) deals with a job that gives her little satisfaction by seeking out clandestine moments of pleasure.

At the play's heart is Mrs Phua (Karen Tan), the senior teacher who genuinely cares about making a difference. For her, teaching is not merely a case of going through the motions and hitting the relevant KPIs but moulding her students into the best possible versions of themselves.

While the production sticks largely to the 2010 version of the script, there have been a couple of updates to reflect the times and the issues explored remain highly topical. The exchanges between the teachers provide Sharma with many opportunities to lampoon the paternalistic, results-driven system. This provides the narrative with plenty of bite but one cannot shake off the sense that the play ultimately thrives on well-worn tropes from its host of stock characters. Lim's verbose expostulations and Zach's vapid catchphrases feel a little artificial.


The caricatures continue in the world of the students. Enter expletive-spouting Teck Liang, the son of fishmongers, and best friend Jali, a lazy and underachieving Malay kid. At the other end of the spectrum, there's social climbing Clare and polished, Shakespeare-loving Raymond whose wealthy father has inexplicably put him in a neighbourhood school to experience "real life". While the class and ethnic differences between these characters throw up more issues than can be adequately dealt with over the course of a two-hour play, they remain authentic and relatable individuals and we find ourselves invested in their stories.

Teach is at its most moving in its portrayal of teachers as surrogate parents for their students, even when their own families have given up on them. All a teacher can do is to provide guidance to her wards and hope for the best. Things do not always work out: Raymond walks away from school bitter and disillusioned while Jali keeps trying to succeed but eventually realizes that he is simply not special. However, just sometimes, these efforts pay off. Teck Liang, the wildest child of all, turns over a new leaf and becomes a caring friend to Mrs Phua in her old age.

Having seen most of TNS's productions in a black box setting, one cannot shake off the feeling that director Alvin Tan has chosen to amp up the drama to fill the spacious stage of the Drama Centre Theatre. The tiered, rotating set by Wong Chee Wai and lively use of local music add to the atmosphere but there seems to be an overdose of histrionics. A camp dream sequence where Mrs Phua envisions her life in an elite school is a case in point. Likewise, scenes depicting the budding romance between Teck Liang and Clare feel almost pantomime in nature.


The ensemble of five actors juggle multiple roles with ease and deliver a truly energetic and infectious performance. Scene stealer Siti Khalijah brings the house down more than once with her perfectly pitched moments of comedy. There is also strong work by Ghafir Akbar in his dual role as problem child Jali and enterprising canteen operator Sabtu. It is heartening to see the enthusiastic response the play has on its audience, particularly the school-going crowd who relish the opportunity to see versions of themselves depicted on stage.

Teach is as much an empathetic snapshot of the daily challenges faced by members of the teaching profession as it is a meditation on the bond between student and teacher which extends far beyond the confines of the classroom. This remains a hilarious and heartfelt tribute to those that have taught us to dream.

*Do check out my reviews of the other productions in The Necessary Stage's impressive 30th anniversary season: Actor, Forty, Being Haresh Sharma, Drip/Whale Fall and Sanctuary.
Labels: drama haresh sharma play singaporean theatre the necessary stage