It’s been year of tough issues for PANGDEMONIUM Rabbit Hole dealt with a couple’s grief over the loss of their child. Next to Normal examined one woman’s battle with mental illness and the rippling effect it had on her family. This final instalment of their self-declared “Survivors” trilogy is a raw, quirky little two-hander by American playwright Rajiv Joseph that explores the lives of two individuals whose fleeting encounters over the years are marked by accidents, injuries and deep emotional scars. 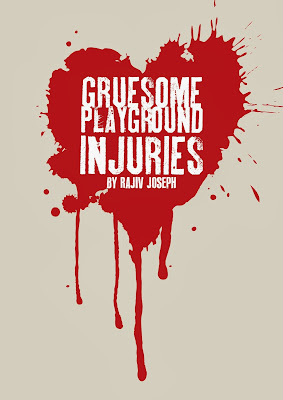 Gruesome Playground Injuries is structured as a series of short scenes that whisk us back and forth in the lives of Doug (Alan Wong) and Kayleen (Seong Hui Xuan), who first meet in the school nurse's office when they are eight years old and encounter each other again and again over the next thirty years. The actors quite literally conjure up each scene: two dressing tables flank either side of the stage and we watch them getting dressed, doing their make-up and arranging the furniture. The year in which each scene is set (from 1983 in the start to 2013 at the end) is scrawled on the floor in chalk by the actors.

Joseph specifically indicates in his stage directions that transitions between scenes should be done by the actors and be "leisurely" in nature. Director Tracie Pang is faithful to this mandate but after a couple of iterations, this begins to affect the flow of the piece. Pang has normally shown a keen sensitivity to pace in her direction so I rather wished that she had endeavoured to keep things snappy. The full costume changes felt unnecessary; since a minimalist approach had been taken with the set (two large box-like structures), perhaps just a few props and some improvisation were all that was needed.

Seong and Wong make an energetic and likable pairing on stage. Seong’s been a regular presence on the local stage over the past two years and it’s great to see her in a meaty lead role. MTV VJ Wong has great comic presence and makes a commendable debut. While the pair are excellent at capturing the childish, emotional mindset of teenagers and young adults, it is harder for them to convincingly inhabit the characters as they grew older.


Indeed, without the year being indicated at the start of each scene (and Doug’s progressive accumulation of injuries), it becomes quite difficult to tell the age of the characters apart from one scene to the next. Wong plays Doug – that clumsy, gangly, thrill-seeking kid - in the same way at all stages in his life. This image of the child who never grows up is endearing at the start but grows increasingly incongruous. Seong is also not sufficiently adept at conveying the backstory and deep emotional scars of Kayleen,  who presumably suffers from abandonment issues which see her turn to alcoholism and self-harm. The result is that we do not truly feel we have witnessed a progression in the lives of these characters.

If one production element really stands out, it is Philip Engleheart’s set design. Engleheart has done tremendous work this year – both his sets for Rabbit Hole and Next to Normal were superb and here, he delivers a angled backdrop comprised of various everyday items suspended between shards of wood – a literal explosion of the items which the various characters have encountered and which have hurt them in this playground of life. It is a simple, stunning and sobering reminder of the world of pain that dominates the lives of these characters. The other ingenious device is the use of music: unscripted radio excerpts (voiced by an ebullient Adrian Pang) have been built in between the scenes, belting out iconic songs of the day and providing an aural and nostalgic anchor to the setting.

Ultimately, Gruesome is a painful, moving and bittersweet reminder of the ties that bind us through the shared experience of pain - both physical and emotional. It’s great that PANGDEMONIUM are consciously forging ahead with productions that confront dark, difficult themes and as we look towards their equally appealing 2014 season (buy your season tickets!), one can only expect great things from this team of trailblazers.