W!LD RICE have become so polished at their year-end pantomimes that they’ve even started rebooting the favourites. 2010 saw a revival of their rip-roaring debut panto Cinderel-LAH!, 2011 gave us a brand new version of Aladdin penned by Jonathan Lim and this year, we have an effervescent re-imagining of Jack & the Bean-Sprout!, originally staged in 2006, with a new book and lyrics by Joel Tan and score by Elaine Chan. 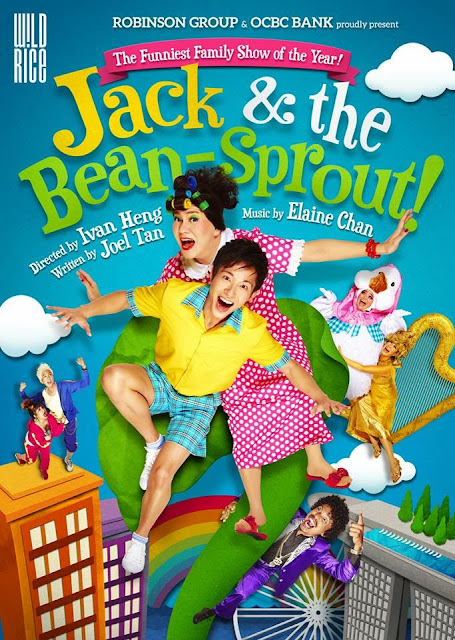 This adaptation of the well-known fairy tale is a fairly faithful one that weaves in all the thoroughly Singaporean elements we’ve come to know and love. Jack (Caleb Goh) and his mother, the gambling-addicted Widow Neo (Darius Tan), are proud residents of Hougang, Threatened by a shady loanshark (Gene Sha Rudyn), Jack reluctantly sells his beloved pet cow in exchange for some beans and lo and behold, a giant taugeh springs up in the middle of Marina Bay that leads him to a mysterious giant who resides above the island. Along the way, Jack encounters two petty conmen who are turned into a singing harp (Karen Tan) and a Mackik-like goose who lays golden eggs (Siti Khalijah) respectively and a beautiful blue alien (Ethel Yap) who catches his fancy.

The FIRST STAGE! kids have always played a key role in W!LD RICE pantos as part of the ensemble and like last year, it’s great to see them being given a chance to shine on the stage in their own right. In an entertaining scene, they play haughty, moneyed, perfectly bilingual students from the Bukit Timah branch of Jack’s school who taunt him and take advantage of his gullibility.

Caleb Goh capably anchors the show as Jack. Goh has a wonderful, clear singing voice that shines in the ballads and equally manages to capture the bumbling, good-natured side of the character. Darius Tan is in fine form as the cross-dressing dame and is superb at working the crowd, berating latecomers with relish and milking his scenes for laughter. Candice De Rozario, Karen Tan and Siti Khalijah shine in the supporting roles, Tan going so far as to deadpan when she first appears on stage, “Yes, it’s me again” (she’s been in seven W!LD RICE pantos to date).

Budding playwright Joel Tan does a generally competent job with the book though, his script relied a little too heavily on slapstick and Singlish for my liking. A couple of the jokes felt dated and I found it a little jarring that Jack kept breaking into the occasional Mandarin line when addressing his mother, something no other character seemed to do.

Tan’s songs, however were inspired. Working with veteran music director and composer Elaine Chan, the panto has a rich and colourful score with some very clever lyrics. The ballads are particularly memorable; I enjoyed the cheeky wordplay in What is This Feeling? and tender romantic stirrings of I Liddat Liddat You. And Le Buang, the Viennese waltz-inspired opening number for the second act, is a perfect symphony of delicious satire and visual pizzazz.

Director Ivan Heng manages the stage action capably, though it takes a while for the energy to build up, and much of the laughter in the first half feels quite forced. While there were a number of technical glitches on the gala night, the actors took this in their stride. A door knob refusing to work had Darius Tan shepherding people through a self-declared “back door” to his flat and Jo Tan’s wig falling off during a scuffle led to an amusing ad lib about her losing her hair due to the trepidation she felt when cornered by loansharks. Oh the fun of live theatre!

There is solid work on the production side. Ian Bailie conjures up a wonderfully wacky set that spans the gamut from the HDB heartlands to high society, there is good choreography by Richard Chia and truly outstanding work on the costumes by Moe Kasim – probably one of the best I’ve seen yet in a W!LD RICE production to date for the sheer volume and variety.

As always, W!LD RICE can be counted on to deliver a smart, snazzy and smashingly entertaining family occasion to usher in the festive season and after ten memorable years, I don’t think any of us want them to stop.