Bright, buoyant and bursting with laughs, Atul Kumar's Hindi Twelfth Night is a fantastic way of seeing just how easily the Bard crosses language and cultural barriers. Originally staged as part of the World Shakespeare Festival in London earlier this year, this production by Mumbai-based The Company Theatre is touring Singapore as part of the Esplanade's Indian Festival of Arts 2012 (Kalaa Utsavam).

In this folksy version reminiscent of traditional village entertainment, the ensemble of performers sit on a carpet behind an august portrait of Shakespeare-ji on an otherwise bare stage and walk up to the front to play their respective characters. When not acting, they freely interject scenes, react to the other characters and have a merry time ad-libbing in the background. The essence of the plot is retained but the comedy is played up and colourful song and dance numbers feature prominently, all performed by the talented young cast with the aid of three live musicians. 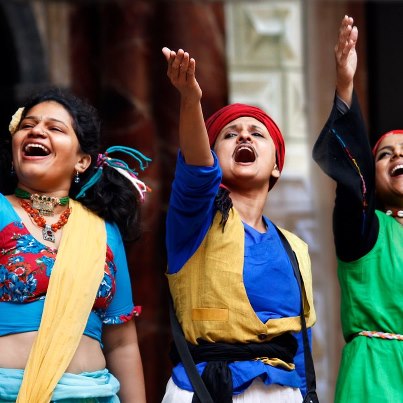 The Hindi translation must be commended for its use of beautiful rhyming couplets and clever wordplay. The characters all retain their original Shakespearean names and I was particularly tickled at a sequence where Olivia kept mispronouncing Cesario's name to hilarious effect. The production also boasts an impressive range of styles from the Indian musical tradition: Feste sings a entrancing song in the style of a Sufi mystic, Sebastian and Andrew Aguecheek trade insults in a raucous Qawwali number and Olivia evokes the melodrama of a Punjabi heroine to great effect.

Kumar's production makes some interesting departures from the text and plays up the theme of star-crossed lovers with true Bollywood spunk. In a new scene, the disguised Viola, facing the anguish of Orsino's unrequited love, quietly removes her disguise (a fake moustache and a turban) and weeps in solitude. The actor playing Sebastian throws in many jibes about how small his part is in the play and tries to milk his scenes as best he can to prolong his stage time. And while the usually pivotal Malvolio subplot is reduced in focus here, it still delivers its moments of high humour, yellow panty hose and all.

While basic scene descriptions in English are flashed up every now and then, one rather wishes that more effort had been made to surtitle the production so that audience members who do not understand Hindi can appreciate the superb dialogue alongside the physical comedy. That said, judging from the belly laughs coming from my non-Hindi speaking friend, I think this production got its masala-filled message across just fine.