When she was approached by Ivan Heng to direct W!LD RICE's traditional year-end pantomime, actress Pam Oei had one condition: it had to be Hansel & Gretel. She wanted to do something that revolved around food, knowing it would speak right to the Singaporean heart. That decision has clearly paid off in this merry, mouth-watering production.

The Brothers Grimm fairytale about two siblings who are abandoned in a forest is given an endearing local twist in this version penned by Alfian Sa'at. Here, Hansel and Gretel live in a radiantly multi-cultural HDB estate in Queenstown, are left to fend for themselves in the Mandai jungle, and the witch is a mysterious woman called the Chef who films her own cooking show called "Makan Mania". Alfian's book and lyrics strike the right balance between family-friendly levity and sharper, satirical jibes, gleefully ticking off army training sessions, national day songs and the recent royal couple visit amongst others. 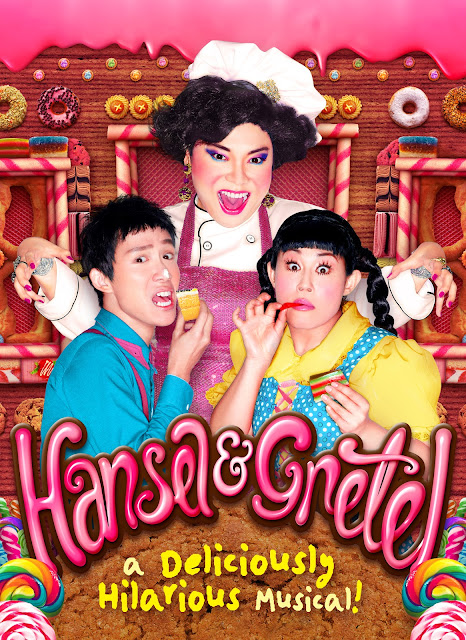 Hansel & Gretel has a relatively small cast of six and there are strong performances all round. I particularly enjoyed Vernetta Lopez's turn as the callous soon-to-be stepmother, a wannabe pop singer who nails the pseudo-American posturings of a certain infamous pastor's wife. Lopez has appeared mainly on television and radio over the years and it's a pleasure to see her prove every bit as captivating on the stage, milking her coquettish remarks to hilarious effect. There is also good support by Dwayne Lau as the kids' rather hapless father.

Dwayne Tan and Denise Tan shine as the eponymous siblings, displaying great chemistry and energy in their performances. However, it is that other pair – Sebastian Tan and Siti Khalijah – who end up stealing the show with their side-splitting antics. Tan is priceless as the buxom villainess who lures the kids into her tasty lair of confections and Siti demonstrates once again that she is a veritable comedic force to be reckoned with, playing a no-nonsense Filipina maid and Tan's luridly-dressed assistant who dishes out a lesson on how to become a Minah with aplomb.

While Hansel & Gretel scores high in terms of entertainment, there is some drag with a running time of more than two and half hours, and the pacing could have been tightened. The first half moves quite slowly and one feels impatient to get to the famous edible hut without quite so much exposition. Several of the songs feel unnecessary (I wasn't sure how much a song about maids cleaning windows added to the plot, amusing as it was) and other scenes could have been easily trimmed down.

Long-time W!LD RICE collaborator Elaine Chan gives us a jaunty and delightful score filled with catchy tunes such as Irresistible (a song worthy of Singapore Tourism Board publicity material), Fighting for Peace and In Sunny Queenstown. Kudos also to Alfian for his inspired re-working of the lyrics of this year's national day song in a sombre ballad Dead at First Light.

First-time set designer Kelley Cheng does a more than competent job. While the sets, featuring a basic structure of hand-painted rotating columns and backdrops, appear less visually stunning than previous pantos, the comparative simplicity allows us to focus on the performances of the cast. The Chef's hut in particular must be singled out for its beautiful ornamentation; there were squeals of excitement when the siblings pried out pandan cake and handfuls of kueh lapis from the walls and passed them round the audience. Rounding up the creative crew, there is great work from the ever-reliable Moe Kasim, Ashley Lim and Beno Lim in the costume, hair and make-up departments.

A staple of W!LD RICE pantos has been the inclusion of its FIRST STAGE! kids alongside the adult actors and Oei uses them to great effect. Apart from filler roles dressed as Angry Birds or an assortment of local foods, a particular crowd-pleaser was a scene where they played army recruits on an exercise led by an incompetent sergeant (Sebastian Tan). Some of the kids were even given lines to harangue Tan and it was great to see them flex their acting muscles.

Those familiar with the original, rather violent fairytale will be pleased to hear that everyone in this version meets a very happy ending – at a Malay void deck wedding, no less. Once again, W!LD RICE's Singaporean take on the panto works its magic this festive season and Hansel & Gretel proves to be the perfect way for audiences of all ages to end the year on a blissful sugar high.