We like to think of ourselves as rational beings. But when the veneer of civilisation is scraped bare, we're really just selfish, nasty, noxious creatures.

Yasmina Reza's Tony-winning black comedy, in a sparkling translation by Christopher Hampton, explores this savage instinct by focusing on a meeting between two sets of parents whose kids have been involved in a fight. Everything starts out well but over eighty explosive minutes, the elegant apartment is turned into a grown-up playground where the worst behaviour is unleashed. 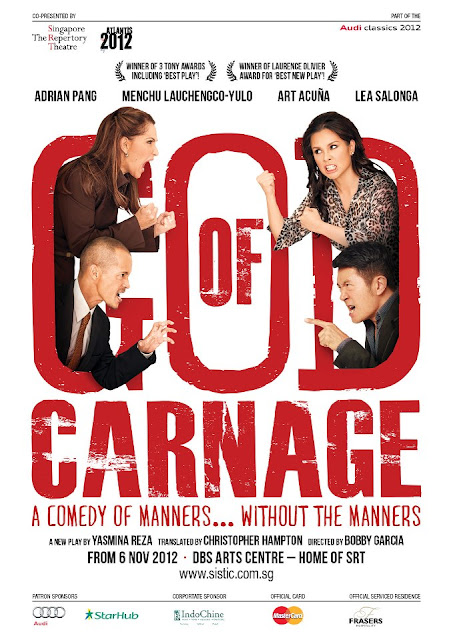 This piquant four-hander, a co-production by the Philippines' Atlantis Productions and the Singapore Repertory Theatre, is directed by Bobby Garcia and ticks all the boxes for a night of electrifying theatre. Accomplished actors Lea Salonga and Adrian Pang have an easy chemistry as the parents of the victim. Salonga anchors the show as the moralistic do-gooder whose righteous façade is gradually chipped away when things fail to shape up according to her plans. Pang also displays a smooth transition from supportive husband to petulant brat who doesn't really care about the artifice of an apology.

Art Acuña and Menchu Lauchengco-Yulo are equally captivating as the parents of the bully: the husband a ruthless lawyer constantly yammering on his phone and the wife, an elegantly diplomatic creature who ultimately turns to drink.

A central theme in God Of Carnage is the casual inhumanity of modern marriages where the men are always preoccupied and barely seem to care about their wives. There's a lovely Alan Ayckbourn-esque moment where the women gang up and demand to be offered a drink. It's both hilarious and moving that the only thing that unites them is mutual contempt for their other halves. 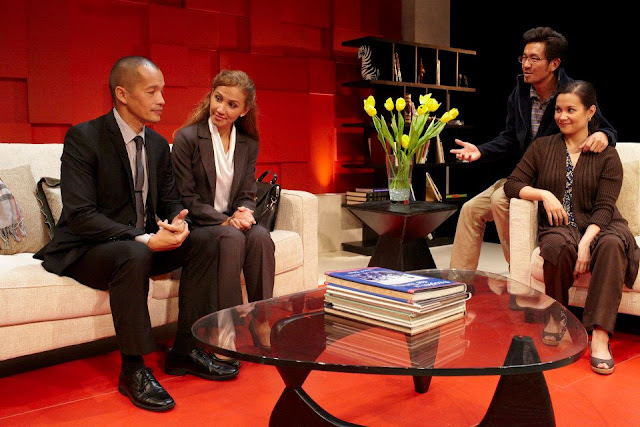 Energy levels start to dip towards the end and the cast occasionally tends to over-egg their scenes but the play is buoyed by Garcia's excellent ear for comedy. All four actors are also great physical comedians who explore the rich comedy both in and between the lines and make the silences work: from Pang's silent mutterings to Acuña brazenly stuffing his face with clafoutis. And kudos to Lauchengco-Yulo for pulling off the most impressive display of onstage vomiting this reviewer has seen yet.

"I believe in the god of carnage. He has ruled, uninterrruptedly, since the dawn of time," says Acuña at one point. Yes, we may be innately vicious beings but we have to admit: Venom has never been so fun to watch.