I’m in the performance space at 72-13 and feel a little exposed. The walls are lined with rows of artworks - mainly portraits and nudes - done by Dana Lam over the past year. Their faces seem to follow me from every angle. Audience members seated across the room occasionally make eye contact as they gaze around. Then there's Lam herself – precise, serene, even hawk-like, sketching her observations on a piece of paper as she surveys the crowd. 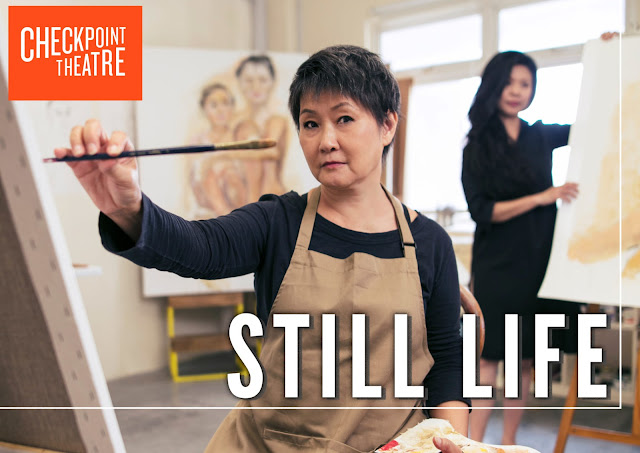 Still Life, which opens Checkpoint Theatre's 2019 season, is a meditation on Lam's life and art. Best known for her life as an activist and being the former President of gender equality advocacy group AWARE (Association of Women for Action and Research), Lam delves into her lesser-known background as a painter. The production was featured as a work-in-progress at the Esplanade's Open Studios last year and has been developed by Lam together with director and dramaturg Claire Wong.

It's an earnest and heartfelt piece, charting more than half a century of Lam’s life from her early childhood to the present day. Much like memory itself, Lam does not take us down a linear path and flits back and forth in time. We learn of her difficult relationship with her parents, her time in art school and experience with motherhood.

While it’s a privilege to be privy to this treasure trove of stories, I’m not convinced the structure quite works. The play is comprised of a string of lyrical monologues tacked together and does not feel like an organic creature of its own. There are times when Lam speaks too loudly or over-articulates, almost as if she is putting on a show rather than just being herself. These actions, albeit small, take some of the authenticity away from the performance. One cannot shake off the sense that even if these words may dazzle on the page, they are not entirely her own.

It's always a challenge to liven up a text-heavy piece such as this and Wong breaks the action up with occasional movements involving talented co-performer Jean Ng. Yet, these  sequences strike one as rather perfunctory. When Lam recounts her pregnancy, she lies supine on a table as Ng pads her belly with layer upon layer of paper moulds. It's an arresting image but doesn't really tell me anything apart from the fact of her increasing weight. Petrina Dawn Tan's set, an elegantly cluttered art studio dominated by a cloud of twigs suspended in the air, fortunately has just enough going to keep the audience invested.

It seems inevitable to make a comparison here with Checkpoint's celebrated production Recalling Mother which involved two women being their authentic selves as they laid bare their relationships with their respective mothers. In contrast, a wall seems to exist here between actor and audience. I wonder if Lam is uncomfortable sharing these personal details with strangers. Does she find the polished cadences of the text difficult to deliver? This is the final performance of a two-week run so she's surely had time to warm up. As much as I want to immerse myself in her story, there's a barrier that prevents me from truly connecting.

The narrative seems to follow a neat, prescribed formula: comedy, drama, physical sequence, anecdote. Light change. New scene. Nuggets from Lam’s past come across as throwaway remarks that do not really resonate. She talks about sharing a clandestine kiss with a boy at school but this point is never revisited. Elsewhere, one struggles to conjure up emotions as one is told of Dana's mother, a woman she dared not look in the eye, lying lifeless on a hospital bed.

Still Life may have had a gestation period of two years but it still feels raw and may need some time to sharpen its focus. Even at a relatively lean sixty minutes, there are issues with pacing as the manicured scenes plod along. It would have been helpful, for instance, to incorporate more dialogue between the performers or mark the various chapters of Lam's life by reference to the artworks that surround us. However, they exist largely for texture and we do not get to dwell on the story behind each piece.

At the end of the day, the honesty and simplicity of Still Life is what moves one the most: the unflinching gaze of the artist who looks not at her subject but back at herself. “Every painting is a self-portrait”, she tells us at one point. And perhaps at that moment we realize that we are seeing fragments of her everywhere, the literal brushstrokes of a life richly lived.