An Enemy of the People

This tale of Thomas Stockmann, the scientist who makes a shocking discovery about contamination in the waters of his spa town and debates on whether he should reveal this to the authorities, potentially jeopardising the economic benefits to his people, both gains and loses from the adaptation. 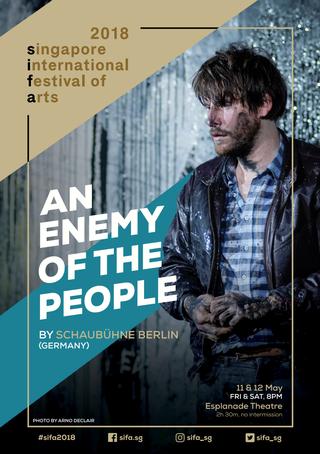 The opening scenes almost feel like a different play. A group of young friends jam to music. They noisily tuck into pasta and wine. A baby cries repeatedly. Instead of a fusty traditionalist in a three-piece suit, we have a Stockmann who is a musically-inclined, messy-haired, plaid-wearing young father. Ibsen had crafted the play as a sharp commentary of Victorian mores and Ostermeier only heightens the element of realism, making this a story that could just as easily unfold amidst today's hipster crowd.

Tensions rise between Stockmann and his brother, the town mayor, when the former decides to publish an article exposing the contaminated  nature of the waters and is backed by the editor of the local newspaper. The actions of Stockmann immediately remind us of whistleblowers like Edward Snowden or Chelsea Manning, individuals consumed by a strong sense of moral justice to set the public record straight. It gives the play a thrilling urgency.

Many modern adaptations of the play, such as David Harrower's 2013 version Public Enemy, have tended to play up its sensationalism, making the Stockmann character an earnest evangelist  who decries the establishment. Ostermeier plays a subtler game, clothing his characters in shades of grey. Stockmann comes across as a petulant child as he confronts his level-headed brother. Is he simply blowing things out of proportion by harping on the report? His wife is seen kissing another man and tries to hide this from him. These are individuals whose flaws somehow make them more human.


The production comes into its own in the seminal town meeting scene where Stockmann addresses the public. The house lights are turned on and the audience is invited to participate in the dialogue. Stockmann's speech, tentative at first and then growing with fervour, alludes to the modern world of advertising. It appears to promise individuality but really breeds a culture of conformity, conditioning us to consume products and behave in a certain way. It's against such mindless conformity that the beleaguered scientist rails against and his words ring with authenticity.

As an audience, we are naturally inclined to agree with Stockmann. Members of the crowd make cogent, logical arguments; surely nobody is going to accept the denial of such contamination lying down? Yet, after an allotted time, the responses are promptly disregarded by the cast and the play goes on: Stockmann is denounced as a threat to society and pelted with paint. It cleverly drives home the point that despite the semblance of choice the majority is offered, the big decisions have already been made for us by a select few. We feel even more outraged because we are implicated in the debate and, like Stockmann, our views have been summarily dismissed.

There are energetic performances across the board with Christoph Gawenda anchoring the cast as the idealistic Stockmann, the man who refuses to back down when the world begins to crumble around him. He is ably matched by Konard Singer his smooth-talking brother intent on keeping the City Council running like clockwork. The cast also double up as stage hands, keeping the action moving along briskly. In perhaps the most striking scene, the cast enter with brushes and buckets and paint the walls prior to the town meeting, a literal reminder off the authorities who insist on whitewashing the truth. A little heavy-handed perhaps but an arresting visual nonetheless.

If I had one cavil about the adaptation, it's the fact that the urgency of the circumstances facing Stockmann are simply no longer there. One is unable to feel the enormity of his decision in exposing the authorities because the stakes against him are simply not as high. Ibsen's original text mentions Stockmann and his family living in the bitter cold of the north and only having recently come into some financial independence. Here, we don't necessarily feel that world would collapse around Stockmann if he were to stick to his decision. The social stigma the original characters would have faced is not as easily transplanted into the world of today.

Yet, to dwell on this is perhaps to miss the point of this punchy, provocative version of the play. Ostermeier and his team have kept the framework of this classic tale and reworked it for our times, giving it a fresh edge that is bound to resonate. The words "I Am What I Am" are projected on the safety curtain as we stream into the theatre, the opening line of an extract from Stockmann's seminal speech at the town meeting. In Ostermeier's production, it's a clarion call for embracing our individuality, standing up for our convictions and hopefully, making a positive change to society.