by Amer Hlehel
translated and directed by Amir Nizar Zuabi
based on the book by Adina Hoffman
Singapore International Festival of Arts 2018
KC Arts Centre, Singapore


This riveting solo performance about the life of late Palestinian poet Taha Mohammad Ali, presented as part of the Singapore International Festival of Arts, reminds us that great theatre doesn't require anything more than an actor, an audience and one compelling story.

Israel-based writer and performer Amer Hlehel's one-hour play is distilled from Adina Hoffmann's biography of the titular poet, My Happiness Bears No Relation to Happiness. It was translated into English by director Amir Nizar Zuabi and has enjoyed warm reviews worldwide, including at London's Young Vic and the Edinburgh Fringe Festival. Adopting a first person narrative, Taha takes us right into the world of this remarkable man who lived through trying times. 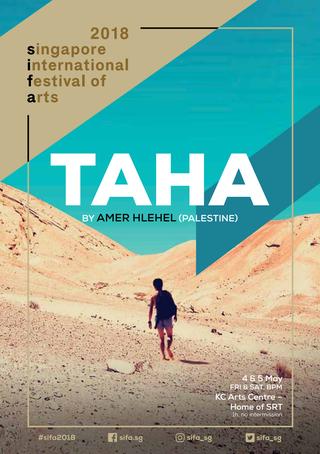 We learn, from the very outset, that Taha's place in the world had always been uncertain;  "I came into the world despite its will," he wryly remarks. At the tender age of seventeen, Taha's life is torn apart when his family was forced in flee his hometown of Saffuriya, Galilee as part of the Naqba - the Palestinian exodus of 1948 - resulting in them moving to a refugee camp in Lebanon. They eventually make their way back but it is to a changed country.

Despite this, Taha learns to move on with life, working in a souvenir shop in Nazareth and teaching himself classical Arabic and English. It's only later in life that he turns to poetry as a means to channel his inner voice. Hlehel reminds us in his artless yet arresting way how Taha sought to give a voice to the voiceless: the everyday people who were exiled and displaced, forced to live as strangers in a place far away from home.

The focus is on Taha's everyday voice as he recounts events from his early years. The text is sprinkled with the occasional, ornate line of poetry accompanied by surtitles. It's only at the end that the true power of Taha's words are revealed when he reads one of his poems, Revenge, in full at a literary festival. The effect of its lucid prose - redemptive rather than trenchant - is nothing short of spectacular.

It's here that Taha achieves its full cathartic potential; this is not just a summary of facts about war in Palestine but a commentary about losing a normal way of life - something that has happened and which continues to happen to people all over the world.

There is no doubt that Taha comes from a deeply personal space. Hlehel was inspired to create this work based on the life of his own grandfather, a man who lived through the Naqba, and on the back of meeting Taha himself. Rather than viewing Palestinians as the subject of headlines splashed on newspapers, he wants them to be seen as real, authentic people like anyone else - people with hopes, dreams and aspirations whose life could be changed in an instant.

This honesty shines through in his matchless, pared-down performance. The action unfolds in a small square of light containing just one bench and a briefcase. With the charm of a raconteur, Hlehel uses nothing more than his powerful, gesticulating hands to convey a whole spectrum of emotions, modulating expertly between hilarity and heartbreak. When he meets a family friend at the age of four, he is told by his father than the hand of that friend's newborn daughter is his. The young Taha is elated: nothing had  ever "belonged" to him before, he deadpans. He grows up thinking of the girl who will one day become his wife and spends years pining for her after the war, only stopping when news of her marriage is conveyed to him in a letter.

"Your dreams are bigger than any last words I can give you", Taha's dying father tells him. And indeed, one leaves the theatre filled with the weight of these dreams, the powerful words of poetry that have made this simple man immortal. This is affecting, utterly essential theatre, not just about people who have lived through pain but of the quivering soul of humanity itself and its ability to find renewal after the harshest blows of life.