based on An Enemy of the People by Henrik Ibsen
in a new version by David Harrower
W!LD RICE
Victoria Theatre, Singapore


For its 15th anniversary season (imagiNATION) that coincides with Singapore's 50th year of independence, W!LD RICE will be rolling out five productions exploring, in turn, the tenets of democracy, peace, progress, equality and justice. It kicks things off with a local adaptation of Henrik Ibsen's classic 1882 play (usually translated as An Enemy of the People) that turns the concept of democracy on its head. 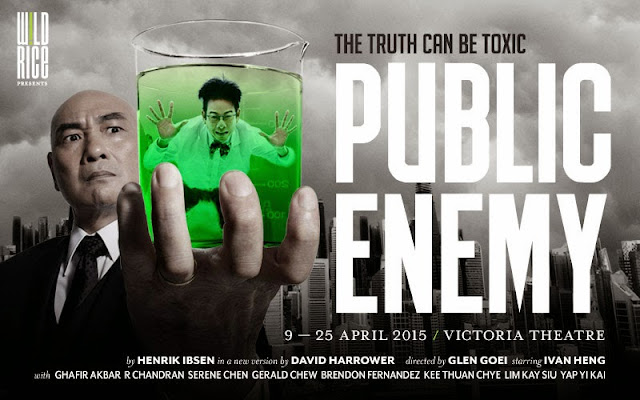 In a glittering Singapore poised to be a world-class resort spa, Dr Thomas Chee (Ivan Heng) has written a report that reveals the country's waters to be contaminated due to industrial waste. He is adamant on making his findings public due to the adverse health consequences but is thwarted at every turn, most notably by his elder brother Peter (Lim Kay Siu), a wily politician who wants him to quash the report due to the economic repercussions: the damage will take two years and billions of dollars to rectify. Friends and supporters who initially express an interest in Thomas's views soon denounce him and he is branded a public enemy.

W!LD RICE has opted to stage a 2013 adaptation of Ibsen’s play by David Harrower (best known for his searing drama Blackbird) that is punchy, provocative and pacey. Harrower's dialogue resonates very strongly in the Singaporean context, especially in our current climate of citizen journalism where public emotions can be so easily swayed by a majority.

However, I did not appreciate the occasional lack of subtlety in Harrower’s writing. The seminal scene where Thomas plans to read his report at a public lecture is littered with sweeping statements. "Has anyone here one good thing to say about politicians?", Thomas baldly demands. The silent majority, he adds, is no better than those in power for blindly following the status quo and refusing to entertain alternative views. I did not feel compelled by this simplistic "us versus them" binary that is forced down our throats. Ibsen's original text shows a little more nuance and it's worth considering if the production would have been able to retain its thrust had it stuck to a more traditional, less incendiary version. Last year’s elegant Mandarin adaptation of the same play by Nelson Chia of Nine Years Theatre conveyed the same theme with far more delicacy.

Ivan Heng grounds the play with a solid, believable presence as Thomas: that quirky, slightly stubborn man who clings on to the truth and refuses to be swayed come what may. His Thomas is slightly cocky and impulsive but ultimately comes across as a deeply loving family man; his exchanges with his wife and children display genuine warmth and colour. There is strong support by Serene Chen as Thomas's steadfast wife, Yap Yi Kai as his righteous daughter and Gerald Chew as a pragmatic publisher. Kudos also to John Sebastian Tan for a commendable turn as Thomas's son Edmund, a little activist in the making.

There are some uneven performances amongst the cast. Ghafir Akbar as maverick left-wing editor proves patchy both in accent and acting; his sudden amorous advance to Thomas's daughter Patricia is incongruous and it's difficult to reconcile his initial friendliness with the viciousness he displays to Thomas during the public lecture. Kee Thuan Chye as Thomas's wealthy father-in-law, whose factory is revealed to be one of the pollutants, spends most of his time on stage shouting and does not seem to know what to do with his walking stick. Veteran star Lim Kay Siu also lacks the brash, vindictive streak one would expect from a truly self-interested man of authority.

Director Glen Goei excels in both filling the vastness of the stage with spectacle and in creating intimate tableaus. He keeps the pacing tight and never lets our attention slide throughout the 100-minute run, played without an intermission. The public lecture scene in particular is extremely well executed: the house lights are turned on, an ensemble joins the audience and we are made to feel like we are part of the raucous crowd at a live event. It's a terrific way of drawing the audience in and folding them into the very structure of the play itself.

W!LD RICE has always been a company with an unabashedly political streak and this riveting, high-octane production is an apt reminder of the dangers of democracy, an ideal which so many people are quick to endorse. It leaves one charged-up, provoked and, as one staggers out of the theatre, hopefully a little enlightened as well.