PANGDEMONIUM has made a conscious attempt in recent years to stage productions that explore a specific medical condition or social issue. We had bipolar disorder in Next to Normal, deafness in Tribes, autism in Falling and homophobia in Tango. Such plays not only expose a wider segment of people to the world of theatre but are a fantastic way to generate more understanding and dialogue about issues that are simply not talked about enough. 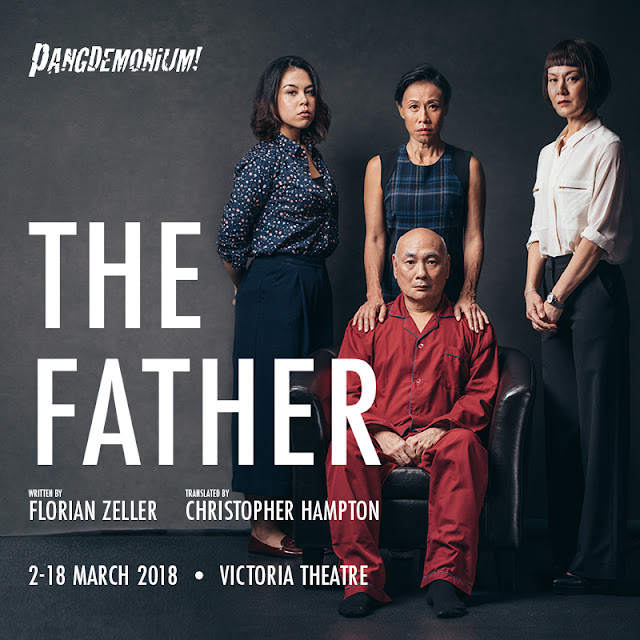 The company opens this year's season with The Father, a simple, searing study of dementia by French dramatist Florian Zeller. The play, crisply translated by Christopher Hampton, is perhaps unique in giving the audience an insight into the condition from the perspective of the patient, making them just as confused and uncomfortable as a person whose mind has begun to fail.


The action revolves round André, an articulate, tetchy old man who has been having a string of problems with his caregivers. He fusses around his apartment, convinced that his watch has been stolen and that his daughter Anne is going to move abroad to be with her lover.

Because things are set up from André's point of view, we grow invested in his story. Yet, as soon as this happens, Zeller pulls the rug out from under us. Narratives fall apart, the chronology of events jumps around and things are no longer what they seem. Like the beleaguered André, we are left wondering what exactly is fact and what is fiction. Why is another woman answering to his daughter's name? Who is the strange man who no one but him can see?

Tracie Pang's production is a slow but superb burn. She navigates Zeller's tender and occasionally funny script with great sensitivity, allowing it to unspool to an emotional core that wrenches the soul. Mostly naturalistic scenes are only broken up by effects such as blackouts, strobe lighting and disconcerting electronic music. While the use of such technical flourishes feel heavy-handed, the idea is simple: we are forced into the mind of André, a man who keeps getting confronted with an alternate reality as the gears of his consciousness shift and spin out of control.

Veteran actor Lim Kay Siu gives a powerful central performance as André, vacillating between flippant condescension and child-like vulnerability. He reacts to a puzzling turn of events with an almost farcical air, looking accusingly around as if we have been playing practical jokes on him. Elsewhere, he crumples in fear at the unknown, afraid of how the familiar has become foreign.

Lim is ably matched by Tan Kheng Hua as the long-suffering daughter trying to decide how best to deal with her mercurial father. For the second time since her award-winning turn in last year's Falling, Tan exposes the tremendous pressure placed on caregivers and how things are never just black and white when it comes to making decisions about one's loved ones. There is equally strong support by Frances Lee as a bubbly caregiver and Keagan Kang as the dapper yet slightly suave visitor who keeps showing up out of the blue.

Eucien Chia's set, a handsome, industrial-chic mélange of greys and browns, feeds into the central theme of a person who has lost control of his memory. As the scenes progress, objects gradually begin to disappear. At first, these are imperceptible - a couple of trophies here, some decorative pieces there. However, the absence of these items soon becomes obvious and we are left with an almost empty stage by the end, an apt metaphor of a mind abandoned by reason.

The Father is a play less concerned with spectacle than the very real, human cost of mental decay - an issue that will only grow in pertinence as our society grapples with an ageing population. Thoughtfully curated talkback sessions after each show with mental health professionals and caregivers underscore the importance of educating the public about this condition and approaching it with patience and sensitivity.