This absorbing chamber piece, written and performed by poet and spoken word artist Pooja Nansi, began its journey as part of Checkpoint Theatre’s performing arts showcase What I Love About You Is Your Attitude Problem at the Singapore Writers Festival 2015. It was subsequently featured as a work-in-progress at The Esplanade's Studios season earlier this year. In this version for the Kalaa Utsavam, directed and dramaturged by Joel Tan, it finally reaches its full potential.

You are Here is both a heartwarming recollection of Nansi's family stories sprawling across three generations and a struggle to understand her cultural identity as a first generation Gujarati Singaporean. We are introduced, in turn, to a series of couples who we learn are her parents and grandparents - unique, interesting individuals whose life choices led to her existence in this place and country. 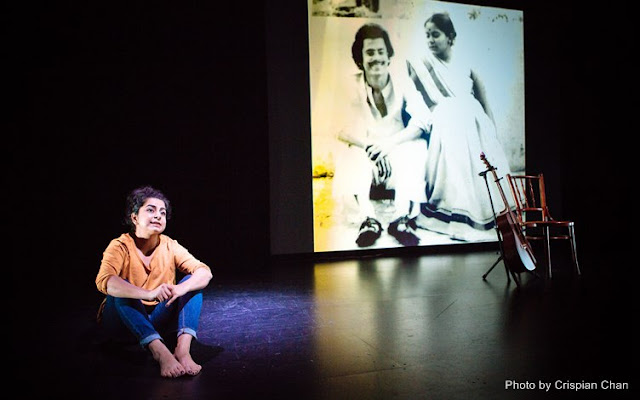 Running through the narrative is an attempt to make sense of her place in the world. Entering primary school in the late 1980s, the young Nansi is shepherded into a Tamil language class by default because she is Indian and it takes some convincing before the school allows her to offer Malay as a second language instead. She is bewildered by a canteen selling strange items like chicken rice and chin chow which look nothing like the Gujarati food she has been brought up eating. When her mother packs her a tiffin meal, Chinese children tease her for eating food that looks like "brown shit". In a desperate attempt to fit in, she implores her mother to make her a jam sandwich.

Anecdotes such as these shine a spotlight on those who quietly slip through the cracks in a country that prides itself on being multi-cultural. Indeed, Singapore is one of those places where society is only too keen to pigeonhole people into neat little boxes and does not always respond well when someone bucks the trend.

The sixty-minute performance is interspersed with a lively mix of songs and poetry. Nansi delivers a memorable account of the heady clubbing culture amongst Indian university students in early 2000s Singapore and sings an aching song of devotion to one's country, reminding us of the pleasures and pains of cultural dislocation and creating a home away from home.

However, not all the elements work well. A recurring segment sees Nansi recording significant statements or remarks drawn from her narrative and playing them in loop. This swirling montage of words that have shaped her cultural consciousness and sense of place grows tedious after a few iterations. In the same vein, email exchanges between Nansi and an NParks official regarding her attempt to hold an outdoor Hindu wedding ceremony at Hort Park provide some laughs but do not feel a particularly necessary addition to her story. 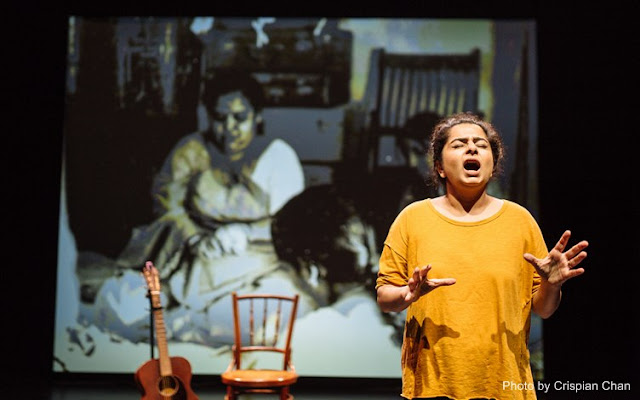 The narrative is brought to life with the aid of a great technical team. Wong Chee Wai's set comprises of three large panels on which life-sized family photographs are projected and the stage is beautifully lit by Lim Woan Wen as Nansi walks around recounting details of their lives and loves over the passage of time.

You Are Home ultimately shines as a piece of honest, unadorned storytelling about finding and accepting oneself, regardless of the labels society may choose to brand one with. In this rapidly changing world, it reminds us to connect with the stories of our past and to celebrate the colourful and contradictory forces that have shaped our identity.