Like the pot of rice steaming merrily in a corner of the stage, Oliver Chong's Roots envelops us with a warm, comforting aroma. This engaging monodrama, restaged as part of The Finger Players’ 15th anniversary celebrations, is written, directed and performed by Chong and was staged to critical acclaim in 2012, snagging awards for Best Script and Production of the Year at last year's Life! Theatre Awards. 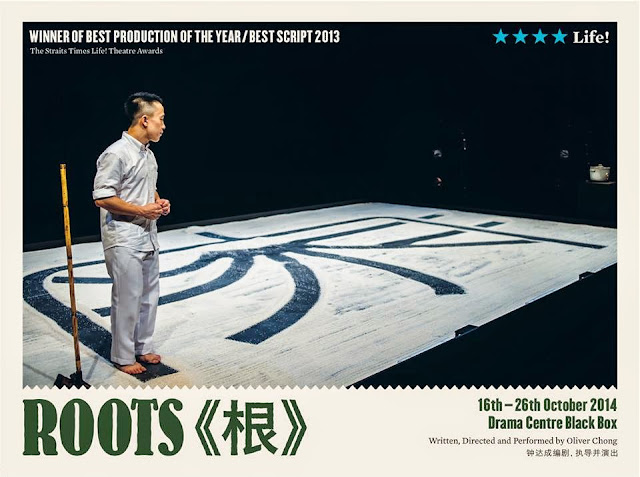 Roots explores Chong's personal quest to learn about his ancestors in China. Armed with only the vaguest of clues and cryptic anecdotes from his grandmother, he takes advice from online forums before planning a journey to his ancestral village near Taishan in the province of Guangdong.

Chong has a unique gift for storytelling: he slips into a multitude of roles as he recounts his adventures to find his hometown, morphing effortlessly from an evasive, absent-minded grandmother to a kindly hotel clerk to a host of whispering village elders. Throughout the seventy-minute performance, Chong pads around in a large trough filled with rice grains sketching shapes and patterns, literally drawing and redrawing the lines of his history as he discovers secrets and stories that have remained hidden for years.

Moments of laugh-out-loud hilarity are balanced with quietly affecting scenes. In a particularly touching moment, Chong describes the simple joy of his father when the latter learns of a long-lost cousin in a small village, reminding us of the eternal power of the family to transcend physical boundaries.

The performance is delivered in a fluent mélange of Mandarin and Cantonese with a smattering of English although it is the use of English that I found to be the most jarring, seeming to be thrown in as an afterthought and making the flow of the surtitles less smooth.

Many of Singapore's iconic monodramas such as Stella Kon’s Emily of Emerald Hill, Huzir Sulaiman’s Occupation and Haresh Sharma’s Best Of are ultimately tales about finding oneself which are both deeply personal and wonderfully universal in their reach. Roots is no exception and it's impossible not to be swept along in the sparkling narrative. We all recognize traits of ourselves in Chong: the culturally dislocated modern Singaporean who wants to get a sense of his family history and understand the journey which led him to where he is today.

And the power of Roots is that it reminds us that sometimes it is that journey which makes all the difference, whatever the outcome may be. We all just want to find a place to call home.