This latest offering by Blank Space Theatre is a biographical drama about Abstract Expressionist painter Mark Rothko. Set in 1958 and 1959, it delves into the life of this intensely private but volatile man who spends his days holed up in a studio, creating immense pieces of art for a prestigious restaurant commission. As one looks closer at these rectangular blocks of colour, one discovers that the worlds of history, philosophy, music, mythology and spirituality are inextricably etched into its luxuriant surface. 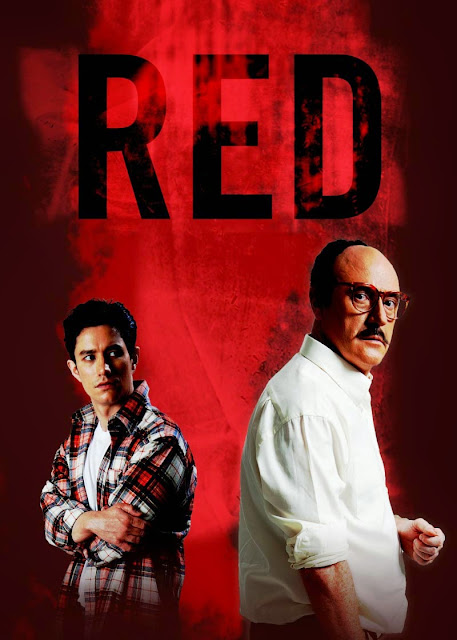 John Logan’s Tony Award-winning play is superbly revived in this gripping black–box production by Samantha Scott-Blackhall, whose last production at the Studios in 2012’s Freud’s Last Session garnered rave reviews and multiple Life! Theatre Award nominations. The unlikely pairing of the real-life character of Rothko (Daniel Jenkins) and his fictitious, mild-mannered assistant Ken (Gavin Yap), is a catalyst for great drama and we are drawn into the verbal pyrotechnics that unfold before us as these two men dissect the nature of art while trying to come to terms with their own identities.

So much of a play like this depends on the characters and we are treated here to a truly spectacular performance by Jenkins, one that is both mesmerising and empathetic. Shuffling around on stage with a prosthetic nose and somewhat dubious-looking hairpiece, he speaks in a clipped New York drawl and alternates between intense brooding and equally spine-chilling moments of lucidity as he explains his convictions, theories and fears. For all this arrogance, we sense that Rothko’s ultimate fear is to become redundant, to be but a footnote in the annals of art history in the face of a younger, more experimental wave of newcomers.

Gavin Yap, who has turned in solid performances in Wild Rice’s The Importance of Being Earnest and PANGDEMONIUM!’s Fat Pig, is also no pushover. While his character is largely a sounding board for Rothko’s opinions, he displays tremendous skill in conveying the quiet determination of a young man who wants to matter and make his voice heard. This comes to a head when he finally confronts Rothko and the latter's pretension in agreeing to paint a series of murals for the ritzy Four Seasons restaurant - a place that represents the very temple of consumerism which he despises - leading to an chastened Rothko to remark: “Today, you’ve existed”.

One cannot help but feel that Logan's script occasionally comes across as a thinly concealed art lecture and is deliberately bombastic in its swathe of ideas. This is of course a function of the character it explores and indeed, many of the lines uttered by Rothko in the play are actual quotations taken from his life. Yet, Rothko's numerous monologues can prove a little trying, especially when there is so little provided by way of counterpoint from Ken.

Scott-Blackhall excels in manipulating the full size of the stage and creating rich visual tableaus. In a beautiful scene, Rothko and Ken apply a base coat of red paint to a blank canvas while listening to music, working so perfectly in sync that their brushstrokes almost resemble a dance. The scene transitions - relaxed yet fluid - are also handled well and we are constantly engaged in the trajectories of these two characters throughout the play.

Equal credit goes to the excellent production team. Set designer Wong Chee Wai creates a perfect reproduction of an airy, high-ceilinged New York studio loft, complete with paint-splattered wooden floor and painting paraphernalia scattered around. The life-sized reproductions of Rothko’s work that were specially commissioned for this production are also to be commended; it is difficult to appreciate the context unless one gets a sense of the scale of these works and the intensity of the solid blocks of colour. The stage is also beautifully lit by James Tan, allowing us a glimpse into the sequestered world that the artist creates for himself. Light is depicted as both an ally – adding an element of mystique and romance in its soft shadows – and as an enemy – when Ken turns the lights fully on, the paintings somehow diminish in intensity under the harsh glare.

Red is a play that opens our eyes to the fragile and fractious world of the artist. Like Ken, we too feel compelled to see something in these magnificent works and as the iridescence of the final scene descends upon us, we realize that there is truly an element of magic that lies in these creations.