Nothing unites Singaporeans more than good food and this intimate and wildly entertaining dinner-themed comedy by Skinned Knee Productions is a breath of fresh air in our local theatre scene. Director Rayann Condy, known for her interesting exploration of space, has set the entire play in a dining room with an open-plan kitchen at Fine Palate Café, a gourmet restaurant along Waterloo Road. For the price of one ticket, you get three actors, three courses and a scrumptious evening out.

Debbie Isitt's The Woman Who Cooked Her Husband is the story of boring, culinary goddess Hilary (Rosemary McGowan) who is left by her husband of many years, Kenneth (Crispian Chan), for the younger, slimmer and prettier Laura (Julie Wee), who cannot cook to save her life. The play begins with Hilary preparing for a dinner party with Kenneth and his new wife Laura after announcing to the audience her ominous decision to cook her husband on the day he left her. As the dinner party proceeds, fraught with tension and alcohol, the relationship between the three characters is shown through a series of flashbacks. It's revealed that Kenneth is a first-rate creep: a man who cannot get enough of Hilary's food but ends up lured into the sexy Laura's bed to satisfy his urges. Even after marrying Laura, he "cheats" on her by secretly making visits to Hilary's to get his daily grub.

Due to this preoccupation with food, staging the play in a restaurant is a stroke of genius. Unlike typical dinner theatre entertainment where caterers weave in and out as the performance goes on, the folks at Skinned Knee have made sure that we remain focused on the play. We have starters and drinks as we take our seats, the main course is brought out during the interval and finally, a dessert platter is served when the play ends to cap off the evening on a sweet note.

Isitt's writing has its moments of brilliance but her plot is a rather formulaic one and it's hard to be convinced how someone like Hilary could put up with a thankless loser like Kenneth, to the extent of cooking for him even after she is unceremoniously abandoned. What lifts this production however is the creative staging. Condy makes terrific use of the small acting space with minimal props and tabletops, sliding doors and even a nifty little post-interval film are employed to tell the story. Half the fun is seeing scenes being dealt with in unexpected ways. Two chairs coaxed from audience members become a car, a blanket covering the actors takes us to a post-coital exchange and perhaps most cleverly, the repeated entrance and exit through a series of sliding doors charts the attenuation of Hilary and Kenneth's relationship over the years.

With the high comedy, the production also takes on a shade of the pantomime (Kenneth gets booed when he mocks his ex-wife and Hilary cheekily breaks the fourth wall to interact with the audience). A corollary of this fun and frothy approach is that one tends to forget that Cooked Her Husband is also a play which deals with a fairly sombre theme. The brooding undercurrent of man's casual inhumanity to woman and modern love being superficial doesn't quite have a chance to make its presence felt. Entertaining as it is, the over emphasis on farce can make things feel a little one-dimensional. 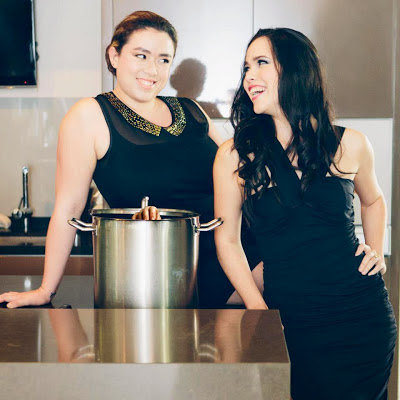 There are uniformly strong performances by the cast and their camaraderie is infectious, giving the performance a giddy energy. Julie Wee and Crispian Chan both do a great job but it is the spunky Rosemary McGowan who is the show's beating heart. I will take some time to forget her furious chopping of celery, sassy, indulgent soliloquies and hilarious bellowing of the word "bastard" at the start of the play. One can only implore theatre directors to sit up and take notice: she needs to be cast in even more local productions.

For those who did not get the chance to get tickets for this short, four-day run, I hear there might be plans for a restaging so keep your eyes peeled. And let's hope this foodie theatre trend continues.

*This review was written for The Flying Inkpot.
Labels: british theatre comedy play