It's hard to conceive of a play where the only two characters barely interact. This documentary performance, a homage to two of Singapore's pioneering artistes, works because it is honest, nuanced and moving.

First performed in 2010 as a work-in-progress called The Red Ballerina, Goh Lay Kuan & Kuo Pao Kun charts the life of local choreographer and dance educator Goh Lay Kuan (Karen Tan), who developed a passion for ballet at an early age which brought her to Australia before returning to Singapore to develop her craft. It also features the man who stood by her side through it all: her husband, playwright and director Kuo Pao Kun (Lim Kay Tong). Extracts from Kuo's notes, letters and iconic plays such as The Coffin is Too Big for the Hole and Descendants of the Eunuch Admiral are interspersed throughout her story, fleshing out common artistic and philosophical themes that run through the couple's work. These are performed by Lim with humour and empathy. 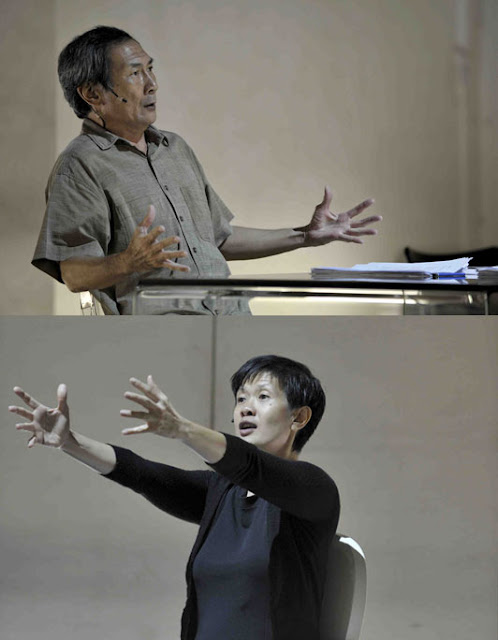 The segments performed by each actor rarely overlap. They are seated on opposite sides of an almost bare stage, separated by a line of florescent lights on the floor. There is nonetheless a rich emotional texture gained by putting the extracts together, painting a portrait of a couple who faced a fair share of adversity as they pursued a common goal to educate the young and set up one of Singapore's first independent arts schools.

A moving scene involves Kuo writing a letter to his wife from jail while he was imprisoned for over four years as part of the Internal Security Act in the late 1970s. The character of Goh - whom many like myself may not be too familiar with - is beautifully evoked by Tan and she comes across as a strong, sometimes fiery and passionate woman who fought against racism, censorship and public comment as she steadfastly pursued her dreams.

Kudos to Ong, Tan and the team of translators and transcribers for working through the vast oral interviews of Goh Lay Kuan from the National Archives and piecing them together into a compelling narrative. It's certainly refreshing to see Kuo's works through the eyes of the person who was closest to him and learning more about Goh's extraordinary life. This is a good, evocative piece of storytelling with plenty of heart.