Yes, it's that time of the year again. Lists, lists and more lists. 2012 has been my most prolific year of theatre to date and contributing regularly to online arts journal The Flying Inkpot has certainly helped. For the first time in years, virtually all the theatre I've seen has been from Singapore with a small handful from a trip to New York in the spring.

Looking at back at the year in Singapore theatre, it's definitely been a good one but it's not been quite as exciting as the past few years. We've had a whole raft of festivals, ranging from the edgy M1 Singapore Fringe Festival to the vibrant NUS Arts Festival and the traditional mid-year highlight - the Singapore Arts Festival, but it seems that there are less stand-out shows. Perhaps it makes sense for the Singapore Arts Festival to take a break next year while we take stock and focus on staging truly memorable theatre events rather than just going for volume. 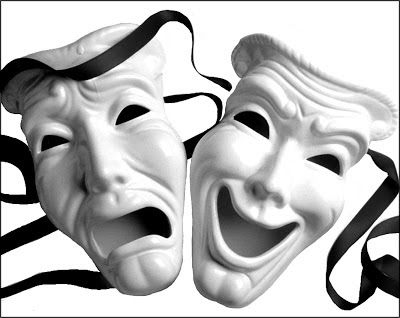 We've also seen a record number of musicals this year. It's particularly heartening that full-fledged local productions like Pangdemonium!'s Spring Awakening, W!ld Rice's La Cage Aux Folles and Dream World Productions' Company have stood up very creditably against glossy Marina Bay Sands imports such as A Chorus Line, Annie and Jersey Boys. This looks like a trend set to continue.

On a more disappointing note, we've not seen many significant instances of new, original writing emerge this year. A couple of excellent ones have been revived such as Jean Tay's Boom and Alfian Sa'at Cooling Off Day but brand new plays have not quite made a splash. Most of the exciting "new" productions I've seen have been collaborative or derivative work.

Followers of my blog will know that I rate all productions, basing my score on acting, directing, script, production values and the overall experience. The average production score for 2012 is 6.8/10 which is only slightly below last year's average of 7.0/10. Another solid year of theatre overall.

On a final note, unlike many other "best of" lists, I've decided to make things more interesting and do my annual theatre round-up in Academy Awards style. I have ten categories for this year.

Best Actor - Philip Seymour-Hoffman, Death of a Salesman
From the moment Philip Seymour Hoffman shuffles in at the start of the play, defeated and crestfallen, to the final scene where he excitedly rambles on about how much his son loves him, it's hard to tear one's eyes away from this fine actor. He turns in a portrait of Arthur Miller's anti-hero Willy Loman that is both deeply felt and movingly rendered: flawed, stubborn and inescapably human.

Best Actress - Jo Kukathas, Occupation
So much of Huzir Sulaiman's rich monodrama about his grandmother's experiences during the Japanese Occupation hinges on the actress playing the role. Jo Kukathas does a magnificent job in rendering the elderly Mrs Siraj: the quavering voice with its slight Indian inflections, physical gait and quaint speech patterns. She also inhabits the guise of the other characters with fluidity and ease. A performance that is not only stunning but truly generous and one of the finest I've seen in Singapore this year.

Best Supporting Actor - Daniel Jenkins, Twelfth Night
As far as supporting roles go in the world of Shakespeare, this one is pretty difficult to top; it's been played by the likes of John Gielgud, Simon Russell Beale and Derek Jacobi. Against all this, Daniel Jenkins does a very fine job indeed in this delightful SRT production in Fort Canning Park. Pompous, bewigged and full of that delicious lofty condescension, he manages the cross-gartered, yellow-stockinged transformation remarkably well. There is a quiet dignity to Jenkins's Malvolio that remains with the character throughout. Subtle and superbly done.

Best Supporting Actress - Neo Swee Lin, Romeo and Juliet
Neo Swee Lin proves just how easily iambic pentameter can be delivered with a Singaporean accent in her fantastic turn as the loquacious Nurse in W!ld Rice's inaugural Shakespearean outing. She gives the play some of its best moments of physical comedy - feeling Romeo up like a schoolgirl and playing around with an umbrella - and never fails to make one smile.

Best Script - Chong Tze Chien, Rant & Rave
In this specially-commissioned production as part of the Esplanade's 10th anniversary, director and playwright Chong Tze Chien puts together one of the most articulate snapshots of local theatre history yet, drawing from commentary by academics, practitioners, government officials and the media to give us a real sense of where we came from and how the issues facing our theatre scene over the past few decades have been, in many respects, the issues we faced as a country. One only hopes it would be revived soon so more people would get the chance to see it.

Best Set Design - Robin Don, Twelfth Night
The SRT's Shakespeare in the Park sets have always been impressive but this year, they have pulled out all the stops. Helmed by acclaimed UK designer Robin Don, we are presented us with a luscious vision of coastal town Illyria, complete with beach bar, sand and charming projections of the sea. There's even get a moon which rises over the "water" at the end!

Best Costume Design - Frederick Lee, La Cage Aux Folles
Here's to glitz and glamour, sequins and splendour! A large part of what gives the musical La Cage its flavour is the appearance of the characters and costume designer Frederick Lee does a phenomenal job in bringing world of the cabaret to us in this sensational production by W!ld Rice. The hats, gowns and exquisitely feathered accessories worn by Ivan Heng's Zaza and the posse of Cagelles are all gorgeous and bring the show to life.

Best Ensemble - City Night Songs
They act, they sing, they dance and even play musical instruments! This collaborative piece about seven friends starring Nishant Jalgaonkar, Joel Tan, Oon Shu Ann, Ivan Surya Tjahyo, Nessa Anwar, Judy Au and Gani Abdul Karim was a major crowd pleaser and a perfect vehicle for students from NUS Stage to get professional theatre exposure from Checkpoint Theatre and dramaturg/director Huzir Sulaiman. It’s a truly ensemble piece of theatre which showcases the cast's artistic talents across various disciplines and a celebration of the urgent, colourful voice of youth.

Best Director - Stephen Earnhart, The Wind-Up Bird Chronicle
It's taken American filmmaker Stephen Earnhart seven years to transport Murakami's acclaimed novel to the stage and one can see why. This lavish adaptation has almost everything that one could imagine: film, holographic projections, dance, puppetry, experimental live music and more. Earnhart's production has a stunning filmic quality but it is ultimately his ability to conjure up, in his own words, "a theatre of dreams" that is most deserving of praise. He beautifully evokes the meandering, fragmented narrative style of the text and the thin line between dreams and reality. A magnificent transition from page to stage.

Best Overall Production - Death of a Salesman
Mike Nichols's superlative Broadway production is rich, full-bodied Americana at its finest. Apart from powerhouse performances by the matchless Philip Seymour Hoffman, Linda Emond and Andrew Garfield, it is bolstered by Scott Lehrer's dense, cluttered set that suggests a quietly crumbling life and Brian MacDevitt's evocative lighting. The scenes blend effortlessly into each other and it is gripping to the end. A splendid production that truly deserves its Tony win for Best Revival of a Play.