National Broadway Company was definitely the star attraction of the Esplanade's 10th anniversary weekend. Conceived, written and directed by Ong Keng Sen, it's a tender, funny and unabashedly indulgent homage to Singapore musical theatre, particularly Dick Lee's iconic Beauty World (directed by Ong back in 1988) which paved the way for a whole plethora of original Singapore musicals over the past two decades. 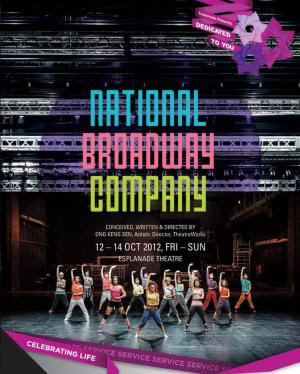 We are introduced to 17 candidates vying for the role as Artistic Director of the National Broadway Company, a fictitious national theatre provider which develops and markets MBS-style Broadway theatre to hotels all over Singapore for public consumption. Each one of these candidates, representing prominent personalities in the scene, has something in common: they've all been involved in Beauty World.

The setup is reminiscent of A Chorus Line. Each candidate is given a monologue or song (reprisals of past musical numbers) to say their piece and along the way, we are treated to colourful anecdotes about these individuals: Pam Oei's nerves on the opening night of Dim Sum Dollies, Dick Lee deciding to return to Singapore when he realized its was pointless making an impact by trying to be "white" and Najip Ali's desire to be a Malay "point of reference".

The main conceit is that each candidate is played by a different actor. This gives rise to some delightful impersonations such as Chua Enlai's spot-on rendering of Ong Keng Sen's mannerisms and unique pronunciation style and Glory Ngim's superb turn as androgynous playwright Eleanor Wong. We even have two actresses playing Jacintha (including Jacintha herself!) and women playing men to further suspend the disbelief. It's therefore far more than an ordinary chorus line but a layered and nuanced examination of an industry through its people: a muscial about artistes by artistes. 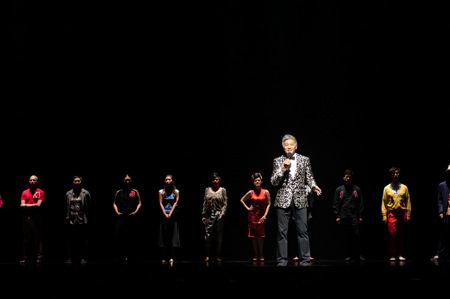 However, National Broadway Company does have its flaws. The Esplanade stage is stripped bare, exposing a cavernous black expanse. While this makes the contrast between the single performer and the stage all the more distinct, it also make them feel very small and not all the actors are able  to fill the vast space. I somehow felt that this would have worked better as an intimate, black-box number. The performance also goes on for too long. The formula of having one actor come on stage, belt out an item number and depart followed by another quickly grows stale; not everyone needed a full scale number to make an impact and I didn't quite see the need for practically the entire score of Beauty World to be reproduced.

Tonally, aspects of the production are also questionable. The modern dance sequences by a separate troupe of dancers are captivating but don't quite fit in - it would have made sense if they were at least performed by the candidates instead of extras. Adding to the awkwardness was Dick Lee's turn as a cheery Benson Puah doing a game-show routine in a sparkly suit.

There's no denying that National Broadway Company is a passionate love letter to Singapore theatre and a perfect vehicle to commemorate our colourful history of making theatre. Behind all its rosiness, it also masks a darker streak. The finale sequence, featuring all the candidates singing Welcome to Beauty World in lurid oriental costumes, feels almost ominous. Is our musical theatre destined to end up as mass-produced commercially-packaged entertainment? Perhaps the point here is that even as we celebrate the past with showstopping numbers, it's important to remember the individuals and their unique attributes lest we meld into the masses.