The concept of Sean Tobin's The Perfection of 10 is certainly interesting. Ten Singaporean playwrights contribute ten plays about notions of perfection, using ten props from ten productions by ten different theatre companies. There's even a perfect split between male and female playwrights and performers.

Yet, I was hesitant about this. Tobin's messy, unconventional and wildly experimental style of theatre did not go down too well with me during his collabarative piece Tongues earlier this year and I was afraid this new project might just be a repeat of that. While Perfection does indeed bear many hallmarks of Tobin's earlier show, one emerges less alienated and far more entertained. It's a big, cheeky ode to the world of theatre and it's hard not to be charmed by its capacity to laugh at itself over and over again. 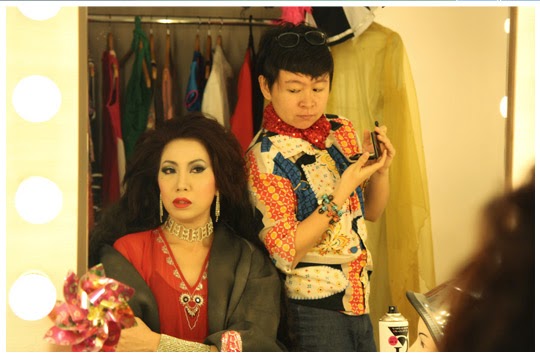 Perfection is threaded together by works from ten different playwrights - Zizi Azah, Jean Tay, Verena Tay, Desmond Sim, Kaylene Tan, Li Xie, Ng Yi-Sheng, Ng how Wee and Irfan Kasban - each of whom mull over a particular notion of perfection: the family, the actor, the play, the audience or even the review. Tobin starts the show, much like Tongues, with a short speech introducing the concept. After telling us about the rather artificial norms of theatre that condition us to think in a certain manner and proceeding to dramatically smash a tomato over his shirt, he sits down in the corner, presiding over the action.

The playwrights serve up a whole range of styles, ranging from physical comedy, monologue, drama, film to multi-lingual, multimedia mash-ups. The four performers (Ang Hui Bin, Patricia Mok, Rizman Putra and Tan Shou Chen) do a good job of drawing our attention throughout this kaleidoscope of activity. Rizman and Tan both excel in moments of comedy but it is Mok who stands out in terms of her sheer range: from a hilarious song and dance sequence to a raw, honest monologue about breaking away from the commercial world of Mediacorp and trying to find herself on the stage. "I am real. You are real. We are both here. We experience this together." she tells us at one point, summing up a in few simple words the very essence of theatre.

Set designer Wong Chee Wai turns the Esplanade Studio Theatre into a stark white arena surrounded by poles that form a circle, snaking up into the audience. This serves to reiterates Mok's message: we are part of the communal experience of theatre, that perfect symbiosis between audience and actor.

While I found the constant interruptions in Tongues grating, here one tends not to mind because it's all done in a clever, self-mocking way that satirizes the many conventions of theatre. Ang makes a cheeky reference to surtitles which refuse to behave, Tobin builds a 'post-show dialogue' into the middle of the performance and a silent piece where the actors solemnly carry chairs around contains naughty survey-like jibes about experimental theatre. One of my favourite segments is Tan's rant about post-show survey forms which everyone just hates filling in; why not just bitch about the plays online, he says, before showing us actual reviews of his past performances by various online commentators. (I felt rather bad for the little girl sitting in the front row on Friday night's performance who had to hear to words "Fuck the survey!" yelled out by the actors about nine hundred times.)

Of course, Perfection is by no means without its flaws. The comedy seems to be overdone at times, I found Tobin's mutterings and tomato-based antics a little superfluous (I half-thought he would smash one after every play) and I would have liked the ending to be rounded off a little more smoothly. As the closing piece, Irfan's impromptu play based on audience stimuli, which is typed and printed out on the spot, proves to be a rather one-dimensional item that is high in slapstick value but, on the night I watched at least, mainly dependent on the comedic talents of Mok with minimal input from the other actors.

However, it's difficult to be riled by these things. Perfection is a fun, wacky romp through the world of theatre and its myriad (im)perfections - both onstage and off - and there's something quite perfect about a production that confronts its topic with such tenacity, spunk and joie de vivre.